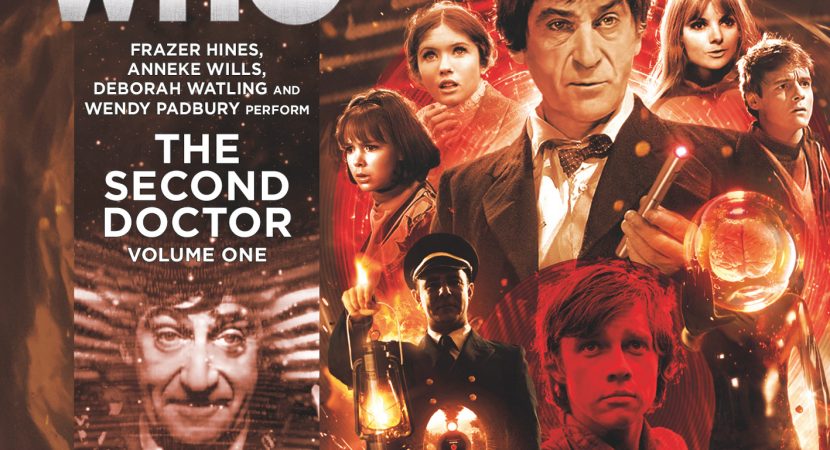 A spooky one-hour ghost story gives Ben, Polly, Jamie and even the Doctor the fright of their lives.

The Mouthless Dead takes place shortly after Jamie has joined the crew, when everything including the TARDIS itself is still an utter mystery to him. For him, a train is almost as scary as the shadowy figures following them in the gathering darkness…

Jamie: Is that the entrance to a mine or something?
Polly: No, it’s just a tunnel, so the trains can go straight through the hill.
Jamie: Och, that doesn’t sound like a good idea. There are things that live inside hills, in the dark…

As usual, Jamie is a wise fool, and they’d do well to listen to him.

This story also brings to life an emotional moment in history, something that’s receded from public consciousness now that it’s been about a century since World War I. I always appreciate it when Big Finish takes us back in time instead of space, giving us a personal window into the past. It’s something that Verity Lambert and Sydney Newman were very committed to when they began Doctor Who.

Ben and Jamie spend most of this audio together, getting to know one another and comparing experiences of war.  It’s great hearing classic characters bond and develop their friendship a little more than was common on TV in the 60s. It’s Polly’s turn to get separated, which is traditional for big TARDIS teams. Facing her own ordeal, she dispenses compassion, common sense and pluck while looking after an anguished young woman with a personal tie to the “mouthless dead.” Meanwhile, the Doctor has to figure out what’s going on before it kills them. He also gets to indulge his fondness for trains, which the Fifth Doctor referenced in Black Orchid.

This is a strongly atmospheric story, eerie and suspenseful. It reminds me a little of Edge of Destruction: not that the crew are at each others’ throats, but something creepy is going on that causes their latent fears to bubble to the surface. The Second Doctor is there to hold their hands, literally or figuratively, and see them through.

Once again, Frazer bounces between Jamie and his nearly-perfect Patrick Troughton imitation. I adore Elliot Chapman’s down-to-earth Ben, which sounds utterly authentic to the character, and he also tackles a guest character or two with such a different vouce that I assumed he was a different actor until my third listen.. Like all Companion Chronicles, this audio isn’t a full cast; it does have one guest actor (Robert Whitelock?) Anneke and Frazer voice other side characters with a sentimental plotline that might’ve been better served with separate actors adding more pathos, but this is a Companion Chronicle, not an Early Adventure, so it’s not full-cast. It still works.

The script does a fine job of building up our expectations about the mysterious train and its occupant, so that we can catch something of the flavour of those days, and it’s a pretty bang-up ghost story. But you need to be prepared for some moments of sentimental mush worthy of a Joan Baez folk song.*

You may want to pick up Simon Hodges’ custom CD art for this audio.

*I’m thinking about four different traditional English/Irish/Scottish ballads where an old soldier comes home for the war (or doesn’t) and find his true love waiting for him.

The reason I said The Mouthless Dead reminded me of The Edge of Destruction is that it’s another plot where a TARDIS fault provides the excuse for a psychological drama. The explanation for the ghosts is a bit flimsy, but I like the idea that the TARDIS translation circuits have started translating people’s feelings instead of their words. A bit hard to believe that it’s making their memories semi-corporeal, but never mind!

The Doctor and friends seem to have forgotten the fact that the TARDIS caused the signalman’s death. Poor fellow.

It’s been fun hearing Jamie and Ben working together in this story, The Yes Men and The Forsaken, but I’ve been itching for Ben and Polly to team up ever since The Forsaken. Anneke did a lovely job voicing Ben and Polly in that story but it was so sad having no Michael Craze, especially when Ben got “killed” early on and Polly spent the rest of the story mourning him. Ben’s disappearance added extra poignancy to that tale, because it was impossible to forget the real-world reason for his absence. But let’s give the sailor and the “Duchess” some adventure time together, now that we can.

My ears pricked when the Doctor mentioned “human technology.” I once did a geeky survey of the Doctor Who transcripts searching for where the TV show first introduced the notion that he might not be human. While the Doctor and Susan reference their otherworldly origins, the First Doctor calls himself human many times, as if he’s from a distant future when humans had settled other planets. It’s not until Victoria joins the show that the Doctor starts dropping hints that he’s not human. Similarly, I don’t think the translation circuits were actually mentioned on TV until Masque of Mandragora.

The details aren’t important; obviously, we now know the Doctor isn’t human, so there’s no reason for him not to let it slip sooner than he did on TV. I just find it interesting how Big Finish grapples with early Who: include canon material that was established later, or ignore it? Generally they do a great job of working in later material while keeping faithfully to the style and tone of whatever era they’re dramatising.

Season Four. There’s nothing to show it’s set immediately after The Highlanders, but it sounds like Jamie hasn’t been with them for too long.