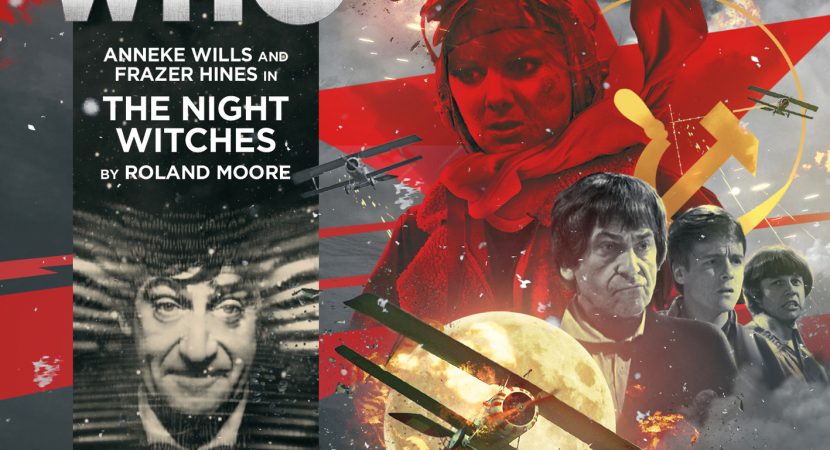 The Early Adventures are full-cast classic Who serials, and this one’s a pure historical. I always appreciate when fiction inspires me to look up a point of history I knew nothing about. The real-life Night Witches offer a fascinating story hook, a scrappy division of female Soviet fighter pilots in World War II. It doesn’t matter for purposes of plot, but this is one of those very rare SF stories where women outnumber the men instead of the reverse.

Ben, Polly, Jamie and the Doctor find themselves in the right place but the wrong time, caught between Russian and German lines. It’s winter, of course, which adds to the danger. Once again, the Doctor is trying not to tamper with history, but history has a way of ensnaring him and his friends. As you can tell from the fantastic cover art, Polly has rather more to do than prepare coffee.

Doctor: Well, don’t get too attached, Polly. As soon as we get back, we’re going to have to leave.
Polly: But Doctor, don’t you want to help them when the Germans come?
Doctor: We can’t get involved here.
Polly: But their planes are old, and they’re outnumbered! Won’t they get slaughtered?

This is a Second Doctor era story, with a lot of running from point A to point B, getting split up and captured and trying to escape. Much of the drama hinges on the frayed temper of a young base commander with no patience or compassion to spare, who assumes the Doctor and friends must be spies. Perfectly typical classic Who.

What’s not typical is that there’s also strong character moments for everyone. Again, Chapman does a stellar job of bringing to life earnest, frank-dealing Ben, while Anneke Wills’ Polly faces several tests of nerve on her own. Anneke does double duty narrating (always a pleasure to listen to). Jamie and the Doctor are somewhat sidelined, but Jamie’s deadpans are as entertaining as ever, and the Doctor’s wits save the day at key moments. There’s always an extra bit of wonder in Two-era audios, hearing Frazer flip seamlessly between Scottish brogue and his uncanny Patrick Troughton imitation. The three guest characters, played by Russian or Eastern European actors who don’t have to fake an accent, are complicated individuals, each dealing with the constant threat of death or defeat in their own way.

The story meanders a bit, and it doesn’t shy away from exploiting the same kinds of coincidences classic Who often employed. Nevertheless, it’s a good “out of the frying pan into the fire” adventure with three-dimensional secondary characters and a chance to spend time with a great TARDIS crew being themselves. I’m impressed at how well new author Roland Moore was able to capture their personalities and voices.

None of the “Night Witches” in this story are actual historical figures, as the author notes in the interviews, although they’re evocative of real Russian women fighting in WWII. At times the need to have an antagonist makes the commander, Nadia Vasney, waste time and valuable resources on the Doctor and friends, stretching plausibility even more than Polly’s doppleganger. (That, too, requires suspension of disbelief, but Who has played the “body double” trick many times. The sticky part is that Tatiana manages to fool Polly’s friends, but the script does at least plant a Chekov’s Gun in part I, revealing that Tatiana used to perform impersonations on stage.)

As for continuity, this audio is supposed to take place after The Yes Men, which is fairly early in the Second Doctor era, and before Enemy of the World.

I like the fact that Big Finish has given many classic characters room to breathe and grow instead of keeping them fossilised in amber. But they’re careful to extrapolate from TV-canon precedents. Ben Jackson’s mechanic’s skills are perfectly reasonable for a second generation navy man who spent time on his father’s ship. Polly was assistant to a genius computer scientist in the dials-and-vacuum-tubes era, so she should be able to follow a complex set of steps to operate TARDIS controls even if she doesn’t know how it works. (Although much later stories have Adric struggling to pilot the TARDIS, but when have we ever worried about tight continuity between one era of classic Who and the next?)