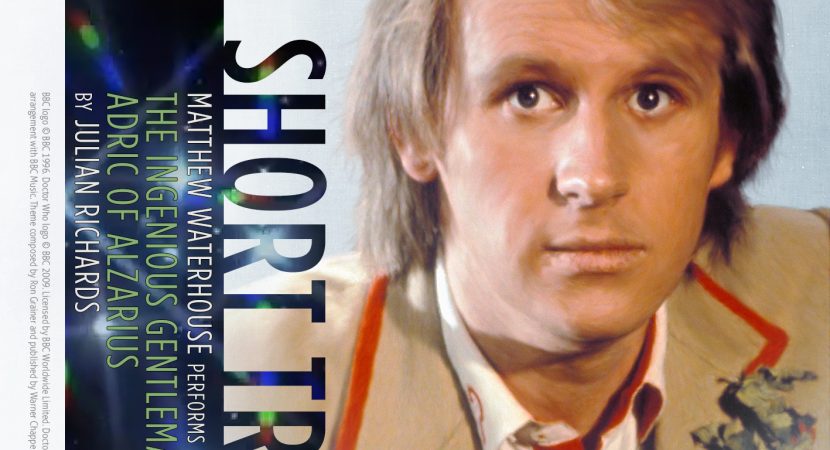 A mashup with Don Quixote could have descended into mere pantomime, but there’s a core of thoughtful truth beneath this fairy tale’s fantasy trappings. Once again Short Trips proves to be an ideal vehicle for Matthew Waterhouse, allowing him to relax and play around with narrative style in his own voice. I especially enjoyed the voice he gave Sir Keeyot, adding a dash of magic to the story.

While it’s branded as a Fifth Doctor audio, it’s really a Fourth Doctor Adventure as well. Not that it feels like a typical Doctor Who adventure until the end.

Separated from the Doctor, TARDIS, and fellow companions, Adric wakes up to find himself in an Alice in Wonderland environment, except that the template is Don Quixote. With his rational mind protesting all the way, he joins the quest of a knight errant to slay a dragon and thwart an evil magician— the Doctor!— who’s after the dragon’s treasure. Adric keeps trying to tell Sir Keeyot that dragons and other mythical monsters don’t exist. But the world keeps telling him otherwise.

“Onward, Cayninn!” he called, spurring his horse and riding out towards them.

Adric looked down at his mule, opted against spurring it, and followed as best he could.

And yet it is a typical Who adventure, translated from SF’s idioms into fantasy’s. It’s fun reading between the lines. There are villages to save, foes to fight, swashbucking, and a certain amount of kettle-and-string improvisation.

But there’s a more sober side to this romp. Companions who witness a Doctor’s regeneration gain a perspective on his character that those who see him with only one face may never discover. During the course of his journey with Sir Keeyot, Adric arrives at some poignant insights about the Doctor’s past, present, and how much of the man carries over from life to life.

Tegan and Nyssa do have minor roles, and there’s a nugget of SF during the denouement to bring Adric back to reality. But this is mainly a character piece for Adric and the Doctor(s)— splendid fellows, both of them.

The Don Quixote revisionism is brilliant— right down to the “burned his library” element— but whose mind was supplying those details? Adric’s, presumably after he came across the book in the TARDIS library? That would explain why he knew what windmills were. Or had the machine plucked the story from some inhabitant? In which case this took place on Earth, and the removal of the “Sancho Panza” machine was even more imperative.

Two thumbs up for gratuitous They Might Be Giants references.

I loved the way the Doctor’s feelings for Romana were integrated into Sir Keeyote’s idiom, with enough dignity to keep the story from turning into a shippy fanfic.