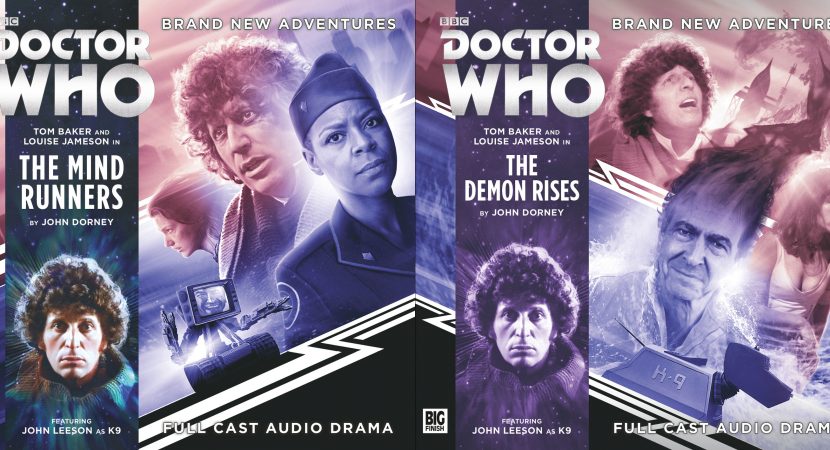 Wow. A BladeRunner-ish dystopia trundles along for a couple episodes, setting up for a narrative sucker punch towards the end. While most Fourth Doctor Adventures are distributed on 1-hour 2-episode CDs, this one is broken into two audios, The Mind Runners and The Demon Rises. It’s the same story in two acts, divided by an unusually sharp cliffhanger.

The Mind Runners is a noir murder mystery set on another planet, where authorities are too busy trying to save the planet’s population than worry about a string of deaths among disaffected youth. The Doctor and Leela witness one death, but have trouble convincing a policewoman that it was murder. When they take up the investigation (and some police evidence), the officer (played by steely-voiced Josette Simon, aka Dayna of Blake’s 7) has to come after them.

The dynamic between Officer Taraneh and Leela was one of my favourite parts of the story, playing off the differences and similarities between forest hunter and streetwise cop. The Doctor, meanwhile, tries to make contact with the Mindrunners, but he’s a little terrifying even when he’s being friendly. (Officious K9 doesn’t help; there’s a stigma against “Digitals” in this culture). Meanwhile, various factions and villains are hunting the Doctor and Leela or the Mind Runners or both.

Doctor: What’s the Night Mind?
Officer Taraneh: Oh, don’t worry about that. It’s not real. It’s a myth.
Doctor: Some of my worst enemies have been myths. So what is it?

The Demon Rises picked up where The Mind Runners left off, shuffling some baddies out of the way rather hastily to get on with the rest of the plot. There’s a conspiracy from the highest levels of government to the depths of the city, and nearly everyone is an unwitting pawn. Body horror and a creative SF twist round off a lively adventure that has not only an A plot and B plot, but also a plot C.

The Mind Runners is a good script for Louise Jameson, with her buddy cop drama that would work as a fabulous spinoff in some alternate reality. Tom Baker’ Doctor is in his element, showering quips and wry non sequiturs and laughing at villains whether he’s languishing in their clutches or thwarting them. In The Demon Rises, the Doctor and Leela are back together for more of the adventure, and it’s notable that the Doctor entrusts her with a complicated assignment during the climax of the story. K9 takes turns sassing them or saving their bacon, making surprisingly good speed during some chase sequences.

Most of the guest characters are generic: likable but feckless twentysomethings, bad-American-accent President and buffoon-in-chief, an efficient but callous vice president who does all the work, etc, etc. There’s a lot of story to get through, so they can’t have story arcs of their own. The standout is the maddening yet charismatic Mr. Shift. He breezes in and out of scenes with panache, infuriating Leela and getting on rather better with the equally erratic Fourth Doctor.

The only problem with The Mind Runners/The Demon Rises is that there are so many meaty SF concepts packed into two eventful hours of drama that some elements get short shrift. Or, to put it another way, the hints of worldbuilding in this story whetted my appetite for more. For example, I would’ve liked to have delved into the Mind Runners’ subculture. Despite meeting a few of them, most of what we learn about them is from Officer Taraneh’s brief unflattering description. I’d also like to know more about the city’s mysterious Founders— are they a caste that’s somehow lasted since the dawn of civilisation right down to the space age? The death-cult of the Digitals was another fascinating premise, but so disconnected from most of the story that I almost felt they belonged in a different audio.

Most of all, I never really sensed the sort of overhanging desperation that one might expect in a dying world where resources are running out and the population is facing extinction (I’m remembering the oppressive atmosphere in Creatures of Beauty, Jubilee or Spare Parts). Instead, as Leela and the Doctor dash from train platform to posh flats to warehouses to sewers, not particularly inconvenienced by decaying infrastructure or desperate citizens, it began to feel more like ordinary London with blue people.

That said, it’s an entertaining yarn that never lets up over the course of two audios. Expert hand John Dorney keeps a great many balls in the air, dabbles in highly original worldbuilding, provides exciting and emotional beats for the Doctor and Leela, invents some engaging guest characters, and sets up a dramatic closing act with gruesome twists and horrific imagery. The Mind Runners and The Demon Rises are a fun listen, inviting the imagination to fill in the blanks where the scripts didn’t have time to go.

Speaking of unanswered questions, the Doctor had good reason to press Officer Taraneh about why they settled on a rocket when teleport research failed. On Earth, the most efficient (and explosive) rockets we can build today are composed of 85% propellant at a bare minimum, and may be up to 90% or even 99% fuel. That’s not only because it takes so much thrust to break free of Earth’s gravity and even more to catch up with distant and fast-moving planets. There’s also the paradox that rocket fuel requires more fuel to lift the weight of its fuel.

That’s why the largest crew we’ve launched with one rocket is eight, and why the Falcon Heavy’s sample payload was a Tesla. What kind of rocket could contain an entire planet’s population plus enough food, water, air, and supplies to sustain them, let alone carry all that weight into space?

If the Chalderans have solved that engineering miracle, then they’ve discovered some mindbogglingly efficient fuel source that could also solve their energy shortage. So something about this plan doesn’t add up.

As the Doctor most certainly guessed.