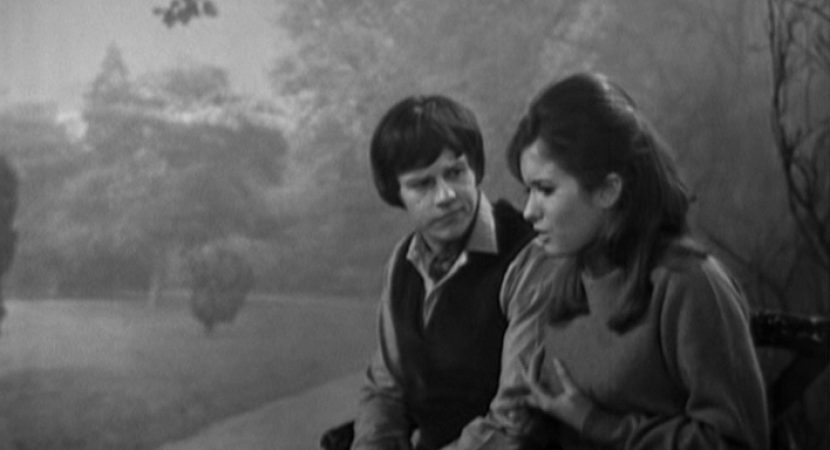 Wow. It’s rare to fit meaningful character moments, vivid setting, big ideas, monsters, and suspenseful plot into the same one-hour audio. By the end, it had my eyes watering like the final episode of Circular Time.

The Doctor, Jamie and Victoria land on an idyllic planet where an archaeological expedition is on the hunt for traces of lost civilisations. It’s a beautiful, lush world teeming with life, yet there’s no sign of sentient life, lending it a slightly melancholy air. Jamie and Victoria are left twiddling their thumbs, shyly enjoying one another’s company while the Doctor’s off being a scientist. Of course, the peace and quiet don’t last long. The Doctor starts to realise that whatever caused the planet’s past inhabitants to go extinct is still out there, threatening to do the same to the expedition. He tries to shield his young friends as long as he can.

Jamie: Was there something ye wanted, Miss Selsey?
Selsey: It’s your friend, the Doctor. Can you come? He’s got ever so worked up. He’s been shouting at all the scientists!
Jamie: Aye. He does that.

Underlying the scary adventure, there’s some clever ideas about the power of words. The author is grappling with some of the same ideas that shape content on the internet. The really clever bit is that this story manages to talk about those themes without being overt or pedantic, and without any references to technology or trends that will sound dated in ten years.

But the big ideas never swamp the main story, a thriller where an unknown danger on an alien planet is picking off visitors and making the Doctor fear for his friends’ lives. Of course, he’s in grave danger himself, and he’ll need their help before the end. With Ben and Polly gone, Jamie’s learning to be the hero for the Doctor and for Victoria, while she provides support, quiet sense and insights.

While Frazer and Deborah take turns narrating as needed,  this is really a Victoria story. We learn how she feels about these adventures and about the Doctor, although she’s more circumspect about Jamie. There’s a lovely recurring framing device that pops up throughout the adventure, elevating it from a typical audio to something a little more personal, a little special. If you’ve ever wanted a good Victoria Waterfield audio, this is it.

ETA: I’ve heard from a few other fans who disliked this story. It’s slower than many adventures, a fair amount of it devoted to “slice of life” moments for Jamie and Victoria. They have some downtime and lots of personal reflection. I enjoyed the character exploration, but I can see why some people might find this audio boring. Also, once again, Deborah Watling is still getting back into the swing of playing Victoria. It’s not just that her voice has aged more than the other sixties actors, which makes it difficult for her to portray a sweet young thing, but also, I don’t think she’s done any regular acting since 1981, and she’s understandably a tad rusty. Hopefully that’ll pass with more frequent audio work!

As usual, Simon Hodges has created lovely custom CD art for this audio.

I didn’t know how to describe Lisa Bowerman’s guest character Selsey without spoiling her reveal. She’s almost like human clickbait, or like actors forever identified with the characters they’re most famous for, which serve as psychological anchors for fans. It’s something I’ve pondered a lot, the way modern fandom gloms onto fictional characters like tribal totems, personifications of things they value or want to be. The actor gets lost behind the persona like a shaman wearing a mask. I found the “autograph factory” aspect of cons bizarre. Why do we queue up to take away pieces of paper with actors’ signatures on them, when what we really want is just a chance to talk to them for a moment? Selsey, the “Face,” serves the same function. But unlike celebrities in our world, she can choose to quit, rip off the mask and disappear into the crowd.

I absolutely loved the scenes of Victoria teaching Jamie to read.  That “V is for Victoria” payoff line was beautiful and sad: it sounds like they’re mourning her death, and we feel the impact of that, but of course, really, they’re missing her after she’s gone. The letter from Jamie was a wonderful coda, leaving his words to our imaginations. So much never got said with those two. Was their relationship friendship? Big brother-little sister? Or did Jamie have a crush on her? And if so, did Victoria realise it? There was never a chance to find out before she left. This story touches on those questions delicately and sensibly, without forcing any definite answers.

The opening and closing scenes, obviously, are Victoria living on her own as an older woman, possibly set in the 80s since the Seventh Doctor stops by. (Also it’s pre-internet, but there are phones).

The main story could be any time during Victoria’s travels (end of Season 4, beginning of Season 5) but I’m inclined to think it’s supposed to be towards the end. She and Jamie are both used to monsters by this time, and they’ve got a sense of how the Doctor operates. Also, Victoria pulls back from Jamie in this story, which the author suggests in the interviews is a precursor to her decision to stay behind.