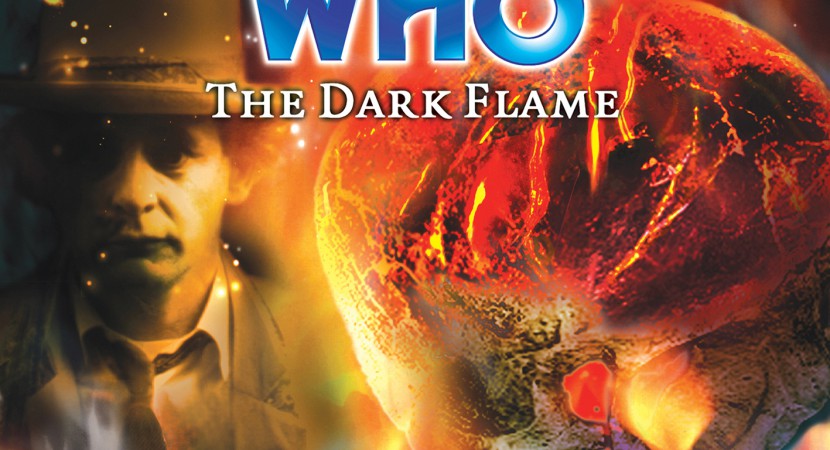 Giving in to the Dark Side, er, Dark Flame was never quite so smelly.

The Doctor and Ace are due to rendezvous with Benny at a scientific research station on Orbos, where a science team is researching Black Light, yet another powerful energy force that comes with serious risks and side effects (please consult your Doctor). Unfortunately, there’s some shifty doings by a nefarious Cult of the Dark Flame which has nasty ideas about how to apply that power.

This audio can’t quite decide whether it’s a Bernice Summerfield romp or one of Seven & Ace’s horror stories with some very dark and terrible moments. Also, the first few scenes are weighed down with some heavy “As you know, Bob” exposition. However, once the story gets going, it serves up a modest potluck of psychological horror, scientific mumbo jumbo, grisly deaths, commando Ace, chessmaster Doctor, and Bernice busting tropes with wry and witty asides. Zombies, mad scientists, an Igor-like henchman, ancient evil artifacts (a skull, no less), and a Tin Man android offer Benny ample scope for critique. One could be uncharitable and accuse this story of wall-to-wall clichés.

“What kept you?”
“Oh, nothing much. Bad headache, blindingly painful hallucinations, some sort of precognitive vision… you know the sort of thing.” — The Doctor & Benny

Poor Benny. She has a very rough ride. So does Ace, although she also has plenty of opportunities to be badass. The Doctor is at his most mercurial, vacillating between clever and ineffective, ruthless and compassionate, brave and arrogant, deadly serious and facetiously whimsical. Yes, he gets a few longwinded bombastic speeches.

Apart from the android, the secondary characters are a bit meh (Wait, that was Michael Praed? How nice for him to play the sinister Sith Apprentice role instead of prettyboy for a change), and there’s some paradox plot holes. So, a workmanlike story but not one of the best. I’d rate it a 6, but it gets a bonus thanks to Lisa adding her customary sparkle.

Part IV ratchets up the stakes on both the macro and the personal scale. Armageddon is about to devour the universe, but even worse, Benny has gone over to the Dark Side! Lisa almost, almost convinces us that Benny really meant what she was saying. I guessed wrong: I thought she was faking being possessed and was using the masquerade as an excuse to rag on Ace a bit. Then she started hurting Ace, in the most shocking and memorable scene in the story. “Friend torturing friend” is a nightmare scenario anyway, but it’s even more disconcerting to have mild-mannered Benny beating the stuffing out of tough woman Ace.

I could have done without the gratuitous “bride of evil” cliché, with Benny kissing the skull and a dead man leering at her.

This is a “Side Step” story, which means it’s a Big Finish set in the Virgin New Adventures EU universe or in the comics of Doctor Who Magazine. That means we’ve got Space Marine Ace, who’s had a stint with “the military” and come back as a special ops fighter whom the Doctor entrusts with some fairly dangerous missions. I’ve stopped finding it so jarring now, although I still miss the old Ace from time to time. Sophie’s very good at conveying her physical proficiency with bombs, guns, door-breaking and other kickass moves that audio can’t show directly.

The Doctor also mentions how innocent and easy everything seemed when he was travelling with Mel, and how nowadays he always seems to be fighting elder gods or other dark forces. It’s actually one of the best things about the Seventh Doctor’s run; he can be the whimsical spoon-player tossing out ghastly puns with Mel, or he can turn into chessmaster with Benny and Ace.

Android Joseph is presumably going to return in subsequent Bernice Summerfield adventures? Alas, I’m so busy catching up on the Main Range, Companion Chronicles and a few other ranges that I haven’t had time to dive into the joys of Benny yet, although I’ve got some of the New Adventures sitting in my formidable listening queue. I think Benny is one of the better female characters in the Whoniverse, and Lisa is fantastic, so I’ll have to rectify this gap in my Big Finish education at some point.

Oh, I mentioned a plot hole. You probably noticed it as well. The Doctor was trying to ensure that everyone who died still died, so as to avoid claiming the powers of life and death. But what about Joseph the android? The Doctor’s time tinkering erased the circumstances leading to Joseph’s self-sacrifice. One could say he was a mere android, and the villain certainly did, but the audio kept pushing the idea that Joseph was complex enough to be considered alive. The Doctor’s farewell to him was to a person and not a machine. So there’s one death the Doctor retconned.