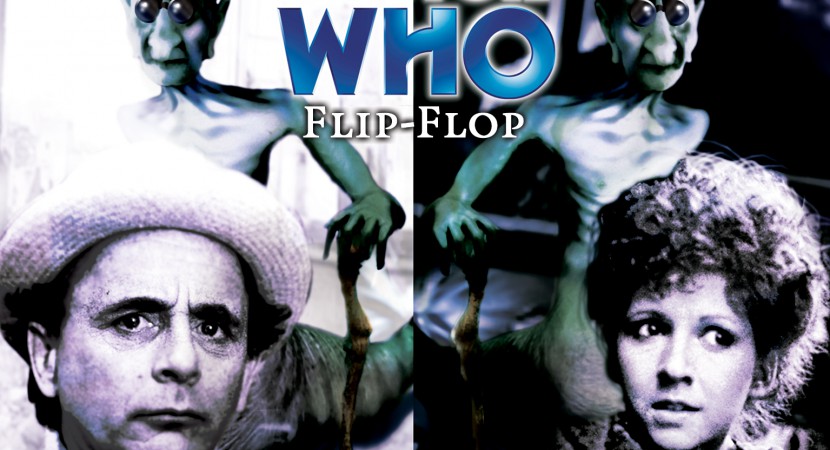 This fascinating story is two stories in one, so that you can start with Part Three (the black CD) just as easily as Part One (the white CD).

Christmas Eve, 3090. The Doctor and Mel land on Puxatornee, where 30 years ago some sluggy aliens called Slithergees arrived as heavily-armed refugees and demanded asylum. The humans have been paying for that costly encounter ever since. But what really happened back then? And why do security forces recognise Mel and the Doctor, arresting them as soon as they arrive? Repeat after me: timey-wimey. But remember, this audio was released in 2003, over a decade before new Who was back on TV.

“One of the hazards of time travel is that occasionally you trip over your own footprints… We’d better pay close attention or we might end up completely bewildered.” — The Doctor

This is a clever, well-plotted story. The secondary characters are less developed than we’ve come to expect from Big Finish, but then classic Who guest characters seldom had overmuch depth. It works fine in the context of this adventure. The President/community leaders of Puxatornee plot and scheme, sending their hapless security forces back and forth to chase down the Doctor and Mel. Meanwhile, the Doctor and Mel have to unravel the mystery, escaping guards and seeking out allies, trying to stop the Web of Time from coming apart at the seams. Martial law and the grim dystopia that Puxatornee has become add a dark, gritty edge to what might otherwise be a somewhat comic story.

The aliens in this story are rather comedic and one-dimensional, reminding me of Alan Rickman at his most hammy. But there’s some interesting, controversial things going on with them which I’ll discuss in the spoiler section below.

Flip Flop is actually the third audio of a trilogy. The stories are all stand-alone and don’t need the others for context. But in each case, Big Finish was experimenting with time, trying to find ways to tell a story other than straightforward beginning-middle-end. Creatures of Beauty was presented asynchronously, Project: Lazarus was split across two different Doctors’ lives, and Flip Flop is essentially a narrative möbius strip! That pleased me very much. But it’s more of a thought experiment than a character drama, more fascinating than fun.

On my first listen, I rated Flip Flop a 7, because the Slithergees’ voices annoyed me, and I wasn’t entirely comfortable with the allegory they seem to represent. Also, Stewart and Reed are arguably the protagonists, with the Doctor and Mel acting mostly as passive observers and facilitators. But it’s tight bit of scripting and a well-crafted story. By the time I was halfway through a “black disc first” re-listen, my opinion of it had improved.

Note: If Puxatornee sounds familiar, that’s because it’s a reference to Punxsutawney, Pennsylvania, the setting of the movie Groundhog Day.

If you got lost listening to this story, here’s the TL;DR version: Mel and the Doctor land in Puxatornee on Christmas Eve, go back in time with Stewart and Reed to flip the “Bailey lives/dies” switch, and hop forward in the opposite timeline on Christmas Day. Stewart and Reed regret what’s happened and try to return to Christmas eve to stop themselves, but they land in the “new” timeline— the opposite one from where they started— and are killed. The Doctor and Mel who brought them there are arrested by security forces, then flee. Consequently, when the other Mel and Doctor arrive a short time later, the security forces recognise them and are trying to recapture them.

I said that Stewart and Reed were the perpetrators of the flip-flop. You could blame the Doctor and Mel for bringing the dissidents back in time to murder Bailey, but honestly, one can’t blame an airline pilot for the crimes of hijackers. The problem is that the Doctor and Mel really accomplish almost nothing in this story, assuming their other selves will tidy up their mess. They’re catalysts, at most. Or are they? In a way, Stewart and Reed are their own catalysts. On the one hand, they’re determined to go back in time and undo the damage caused by their alternate selves, and on the other, when they switch to the other timeline and see their counterparts’ crimes— the massacre after the food riots and the terrorist attack on the sight guide school— they want to go back again and undo their own actions.

I wasn’t as taken by the love triangle plot with Bailey, Mitchell and Clarence, but there’s an interesting detail on Disc 3. Bailey, thinking Mitchell has betrayed her, orders him against the wall, and then there’s a gunshot, but it’s not entirely clear whether she committed suicide or whether he shot her in self-defense— just as, 30 years earlier in the same timeline, Lieutenant Stewart had instructed her to pretend she’d shot Clarence in self-defense.

As for the Slithergees, they initially struck me as an allegory for the pitfalls of affirmative action. They keep playing the victim card, when in fact they’re tyrannical oppressors. That paradox reminds me of an argument I’ve heard again and again from so-called conservatives in the U.S., most recently from Donald Trump: evil immigrants/blacks/women are taking over and ruining everything while pretending to be victims. Or think of Gamergate, mocking women’s claims of sexism while sending them death threats, or American police officers calling the #blacklivesmatter movement a “war on cops” while shooting nearly 1000 people in 2015, or the religious right complaining of oppression by gays while passing laws to stop them from marrying. Oppressors often reinforce the status quo by misrepresenting those they oppress as perpetrators of oppression.

On the other hand, we could see the Slithergees as an allegory for insidious imperialism. The first European arrivals were pretty hapless when they arrived in North America, soliciting (or demanding?) help from local Indian tr4ibes. By the time Native Americans realised they were being overrun and crowded out, it was too late. Soon, they were forced to learn European languages, culture, and traditions, while their own religious holidays and culture were ruthlessly suppressed. See also: Australian aborigines. I’m sure other native populations could tell similar stories.

So it’s a matter of perspective. And in the real world, problems are seldom black and white. But it’s just as well this story is an audio drama and not an episode of current TV Who: I think it would fan the flames of many fan flame-wars.