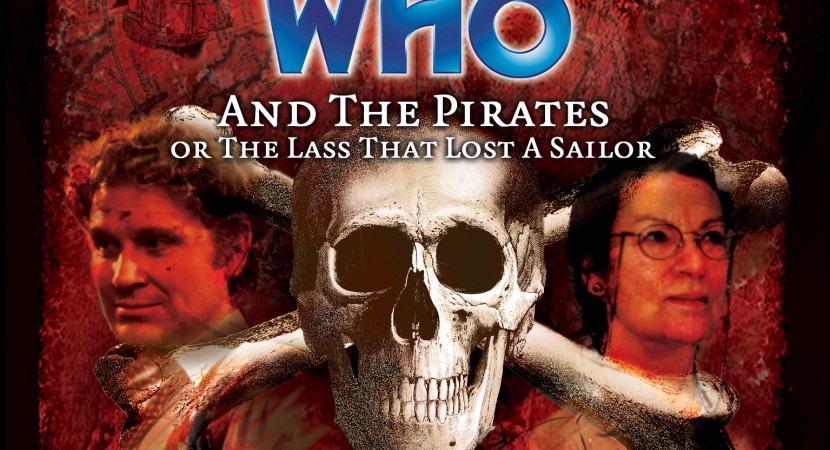 Here’s that delightful Sixth Doctor Gilbert & Sullivan musical of Pirates of the Caribbean that you always wanted.

Mind you, if Dr. Smythe and the Doctor had barged in on me when I was having a rocky night, I would have been in no mood to listen to their lengthy storytelling. Then again, I suppose it’s difficult for a lowly student to be rude to a favourite professor, let alone dislodge the Sixth Doctor from one’s sitting room. Sally in this audio is a cynical, college-aged Bëorn, with Evelyn as her Gandalf and the Doctor as a very oversized Bilbo, telling her a tale of adventure on the high seas.

The story within the story is an ostensibly lighthearted yarn of swashbuckling, piracy, treasure maps, mutiny, and all the usual Talk Like a Pirate Day clichés. There’s some clever meta in the delivery: the more Evelyn and the Doctor draw attention to their unreliable narration, the more it sounds like they’re telling a true story badly to disguise the grim parts. The sillier it gets, the more serious it becomes. The Doctor’s having a merry time with it, giving himself airs and filking to Pirates of Penzance and HMS Pinafore, but Evelyn’s getting all choked up. What’s her secret? And just why did they drop in on one of her students to regale her with an all-night oral Doctor Who marathon?

Caricatures abound: Red Jasper the mad pirate captain who lays it on thicker than Barbossa, a matched pair of redoubtable first mates, an earnest cabin boy named Jem straight out of Treasure Island, and a foppish Captain Swan (no relation to Elizabeth) royally deserving of a pie in the face. Among the guest characters, Sally is the only one who sounds like a real person, skeptical, cynical and unconvinced. The Doctor and Evelyn keep slipping in and out of fiction, vacillating between comic and deeply compassionate figures. Colin Baker and Maggie Stables are a brilliant TARDIS team, as usual.

Much like the exterior and interior of the TARDIS, the sober framing story of the Doctor and Evelyn crashing Sally’s flat doesn’t match the tone of the pirate farce that they’re telling her. The disjunction in this audio between comedy and tragedy, fantasy and realism is somewhat jarring, but that’s the point. This is another of Big Finish’s experiments in storytelling, and the genre juggling is deliberate. The result is a well-loved Sixth Doctor story with entertaining songs some fans have memorised (see below).

BF WebsiteMR#43 - Doctor Who and the Pirates

The audio’s subtitle, The Lass Who Loss a Sailor, turns out to be the sober flipside of the lighthearted Doctor Who and the Pirates musical.

While I enjoyed songs like “Gallifreyan Buccaneer” and “Evil Evelyn the Pirate Queen,” I had a little trouble with this audio because of the mood whiplash. A suicide watch isn’t the ideal frame for a lighthearted Doctor Who musical. On the other hand, a story dealing solely with suicide would’ve been too depressing to listen to without some sort of leavening, and the musical all by itself would have felt fake and trite without the real-world grounding. It’s certainly true that friends respond to suicide attempts by fluttering around making nuisances of themselves and driving that person batty in their well-intentioned attempts to protect her from herself.

But you don’t want my opinion about this audio. You want lyrics! I’ve seen lyrics posted elsewhere, but there’s a few lines I heard a little differently. So here’s my attempt to transcribe that famous song.

Lyrics: I Am the Very Model of a Gallifreyan Buccaneer

I am the very model of a Gallifreyan Buccaneer
I’ve information on all things a Gallifreyan holds most dear
I’ve linked into the Matrix through its exitonic circuitry
I understand dimensional and relative chronometry.

I’m very well acquainted too with matters of the Capitol
I’ll give you verse and chapter on Panopticonian protocol
I’ve been into the Death Zone and I’ve played the Game of Rassilon…  (Rassilon? Assilon? Bassilon? Ah-ha!)
With pestilential monsters that I got a lot of hassle from!

I understand each language and I speak every vernacular
I’ll conjugate each verb obscure, decline each noun irregular
In short in every matter that a Gallifreyan holds most dear
I am the very model of a Gallifreyan Buccaneer.

I’ve tackled shady Castellans with devious behaviour
I’ve sparred with Time Lord chancellors like Thalia, Goth, or Flavia.
In fact on some occasions I’ve held office presidentially,
Though maybe I won’t mention I was ousted out eventually.

I know just how it feels to be a wanted man and on the run
But wouldn’t leave the carefree buccaneering life for anyone
Though sometimes my adventures seem absurdly operatical… (Operatical? Hatical? Patical? Ah-ha!)
With ups and down and twists and turns and incidents piratical.

I’ve sailed the seven seas of Earth and all the oceans of the Moon
My trusty true Type 40 is my Gallifreyan picaroon
But is this really what the average Gallifreyan holds most dear?
I wonder what they think about this Gallifreyan Buccaneer.

But is this really what the average Gallifreyan holds most dear?
We wonder what they think about this Gallifreyan Buccaneer!

I’ve liberated planets and delivered them from total war
Saved Earth, Manussa, Dulkis, Skonnos, Earth, Tigella, Earth once more
In short I know I am the truest Rassilonian legatee…  (Legatee? Dekate,* Hekate… Hekate? Hm, not sure if that’s canonical. Ah-ha! I have it!)
And so to Time Lords all I say: remember me to Gallifrey!

I’m not content to just observe; I am a bold adventurer
Though other Time Lords mock this Gallifreyan interventioner
I know in every matter that a Time Lord really should hold dear
I am the very model of a Gallifreyan Buccaneer.

We know in every matter that a Time Lord really should hold dear
He is the very model of a Gallifreyan Buccaneer!

*Dekate = tenth part of something, especially booty taken from an enemy. I’d bet Jac Rayner has studied Greek and Latin at some point; many of her scripts betray a bookish liberal arts upbringing.