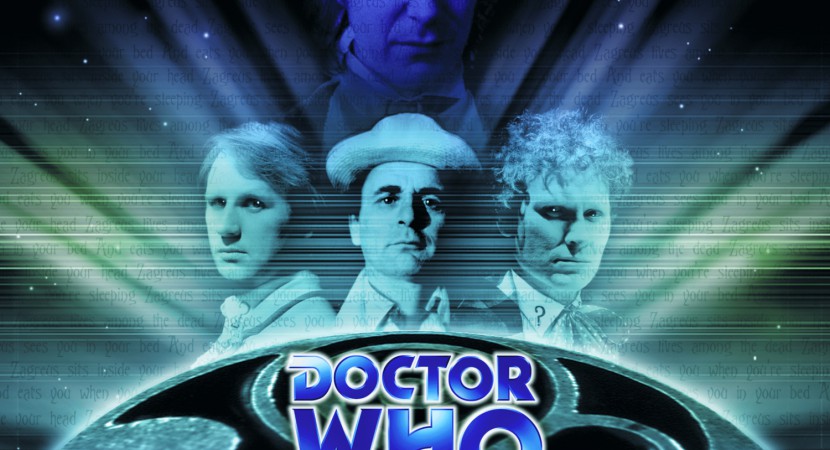 Ah, Zagreus. It’s ponderous and sprawling and screws around with Gallifrey and presents Eight and Charley and the TARDIS in a less than a flattering light, but I still enjoyed it. The more so the second time around, now that I’ve “met” the Big Finish additions (Lisa Bowerman, Maggie Stables, Caroline Morris, Conrad Westmaas) to the Doctor Who family.

You don’t have to know whom I’m talking about, but it adds a little more fun. That’s because the first third of Zagreus is an enormous cast party for all the Big Finish Doctor and companion actors to date (including one slated to be be introduced a few stories later) playing other roles invented especially for this story.  The plot contrivances throwing them all together are a little strained, but that’s not really the point. Personally, I had a ball hearing everybody doing something slightly different from their usual fare, with fourth-wall-nudging meta about their characters and Doctor Who in general.

There’s also some comic commentary on everything from the BBC to Disney to Lewis Carroll. Be prepared for panto.

Of course, there is a serious story happening as well as just an excuse to drag everybody into the recording booths. Zagreus picks up after Neverland and reprises it for those of us who hadn’t heard it yet (the first time around, I hadn’t). Eight has gotten himself into a world of trouble by absorbing a huge dose of “anti-time” which has made him unstable. The TARDIS has taken a similar beating. Its damaged interior dimensions allow for some surreal sequences (the aforementioned cast party).  The main plot is, “how can Charley help the Doctor recover himself— or can she?” There’s a secondary plot with a new alien menace which I felt got shoehorned in to explain the following season, and it doesn’t entirely work because we never see this menace well enough to get much of a sense of it.

That plot serves as a springboard for a great deal of new Gallifrey backstory, contradicting some of what had been established in Neverland and classic Who and sowing the seeds for the Rassilon we see in New Who. There’s a lot of thought-provoking ideas, and a certain amount that made me grit my teeth. Misgivings aside, I can’t help but be pleased that Zagreus introduces Leela and Romana to one another and brings Braxiatel out of Benny-verse into Romana’s orbit, laying the foundations for the Gallifrey series.

In effect, Zagreus is a daring mashup of classic Who canon elements (mostly related to the Time Lords) as well as cast members.

Everyone is putting a great deal of gusto into their performances, particularly when they’re playing odd inflections of themselves, but I have to give a shout out to Paul McGann for his wonderful range in this one: from rage to pathos, evil to sweet, insane to lucid. The script would’ve fallen apart without that. India Fisher and Nicholas Courtney help, but Paul’s really demonstrating, once again, why he’s a great Doctor.

Besides the fact that it’s celebrating Big Finish’s 50th Doctor Who release, Zagreus marks another milestone: it’s the first multi-Doctor story with Eight. The Sirens of Time introduced BF’s trio of “classic” Doctors, and Project: Lazarus experimented with another “Two Doctors” story for Colin Baker, but Zagreus officially inducted Paul McGann into the “boy band” and fused his continuity with classic TV’s.

It’s messily constructed. It’s long. It makes more sense on a re-listen. I’m kicking at some of the worldbuilding it’s tacked onto Rassilon and the Time Lords, and there’s some points where the characterisation of the Doctor and Charley (and the TARDIS!) rings sour. However, by and large, although I can understand why some fans don’t.

Incidentally, it’s the last of the Main Range $3 downloads before they go up to full price.

I mentioned that Zagreus contradicts bits of Neverland and classic Who. Specifically, prior to Zagreus (or at least Omega), Rassilon had been a great hero, for the most part, an “old man, infinitely wise and sad.” He was very kind to Romana and his favoured son in Neverland. I suppose that was a false front, but it felt genuine. I mourn the passing of that Rassilon, the one that the Doctor spoke of so highly in the classic show I grew up watching. Then again, it’s a bold and daring twist that Rassilon has a touch of Palpatine in him and has been grooming the Doctor to become Zagreus, subverting the “wise ghostly mentor” trope. It fits the villainous Rassilon seen in New Who (and probably in later Big Finish releases I haven’t gotten to yet). I’m just a little disappointed at the modern cliché of the childhood hero who turns out to be tarnished and corrupt.

And boy howdy is he corrupt. Big Finish invented a much darker reason than classic Trek did for why the universe is full of humanoids with prosthetic foreheads.

I’m also disappointed at the clichéd love triangle between the TARDIS, Charley, and the Doctor. The jealous TARDIS dumps the Doctor and signs on with Rassilon instead: Really? Sometimes I’m a little cynical about the vast number of scripts written by guys about catty women fighting over the same guy. I’d like to think that Rassilon was able to sway the TARDIS into acting out of character because of the Zagreus-infection, but it’s hard to tell whether that’s really what’s going on. I wish there had been a more explicit reconciliation between her and the Doctor. (On the other hand, I love the fact that she assumed the Brig’s appearance as an interface. Yes. YES. An old friend, indeed.)

I also don’t understand why Charley’s boasting how she’s utterly loyal to the Doctor one moment and then stabbing him the next when she thinks he doesn’t love her (or why she thinks his asking her to kill him precludes his loving her, since yes, it’s asking a lot, but she asked him to kill her for similar reasons in the previous story).

The plot with the melted-down TARDIS also gets mighty convoluted near the end. Although what an image: poor TARDIS! I do hope the Doctor is very kind to her for a while to make up for all this.

I also very much enjoyed the finale of the three Doctors chatting to Eight about regeneration, although Big Finish does have a bad habit of borrowing iconic lines from the classic TV series which should perhaps be left alone.