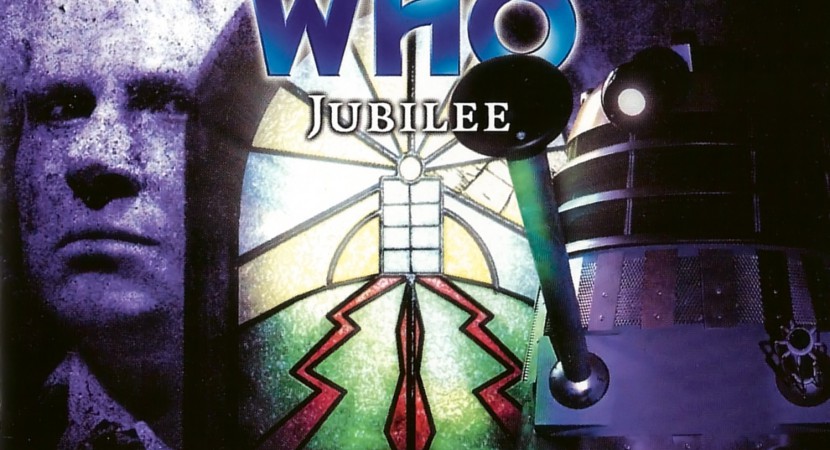 Justly famous as one of the finest Doctor Who stories, Jubilee was so powerful that RTD asked author Rob Shearman to adapt it for new Who’s first season. Dalek was the result.

The original drama is darker, despite lacking the Time War’s long shadow over the Doctor’s hearts. The Doctor has once again saved humanity from a Dalek invasion, but his good intentions have led to hell on Earth. England (not even Britain, but England) has arisen from the ashes as a totalitarian empire, imposing colonialism, sexism, racism, and brutal ableism. The corrupt regime’s propaganda exploits images of evil Daleks and the heroic Doctor. Ironically, Dalek merchandising seems more ubiquitous, which says something about the banality of evil or of human tastes.

Exploring this brave new world, Dr. Evelyn Smythe comes face to eyestalk with the last surviving Dalek, a rank-and-file soldier powerless to kill itself. Their jail cell confrontations punctuate the audio with scenes of psychological drama. They demonstrate the menace of the Daleks far more convincingly than any other DW story, while simultaneously making the monster a strangely sympathetic character. Nicholas Briggs pulls off the impossible by giving a Dalek an emotionally complex voice. But it’s Maggie Stables as Evelyn who carries Jubilee on her cardigan-wrapped shoulders, courageous in her fear and fiercely kind.

“You should have given me better orders!” — the Dalek

This audio is a parable and a passion play. At times, its caricatured characters detract from the story’s effectiveness by being a little too unreal, with madness substituting for plausible character motivations. Also, I personally have trouble listening to vivid scenes of torture. Doctor Who often dramatises the battle between good and evil, but seldom depicts evil so directly. Nevertheless, Jubilee deserves its reputation as a masterpiece.

Trivia Note: Martin Jarvis, the voice actor for President Rochester, played the Governor in Vengeance on Varos. (And there may be a sly reference to Margaret Thatcher in his ancestry: his grandfather was a greengrocer).

I normally reserve the 9-rating for my favorite BF audios, which this really isn’t, since I don’t think it’s one of those I’ll listen to again and again. However, it’s too good a drama for me to rank it merely an 8 for “excellent story.”

I have a lot  to say about this audio. Rob Shearman packed many provocative ideas into his script which are worth unpacking. Jubilee stands on its own, since it was released in January 2003, and the press release announcing plans for Doctor Who’s revival didn’t come until September 2003. Nevertheless, the contrasts between Jubilee and Dalek reveal some fascinating changes in the Doctor’s character between new Who and classic. 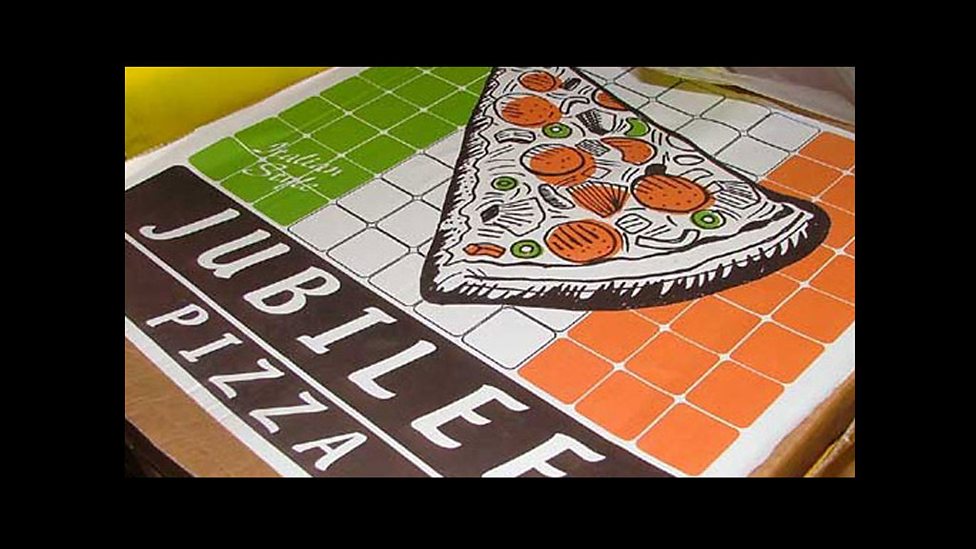 “Jubilee Pizza” box on the set of “Dalek.” A deliberate visual reference to “Jubilee,” along with minor characters Goddard and Simmons, named after two of the “Jubilee” voice actors.

It’s hard for me to organise all my thoughts on this one, so please bear with me.

First of all, there’s the unlikely friendship between Evelyn and the Dalek. I love the Dalek’s desperate cries of “Silence!” when it’s angry at the truths she’s speaking, yet also trying not to give into its anger and hurt her. It respects her precisely because she fears it. She’s the only one who truly remembers what the Daleks are. During its long self-isolation, this Dalek has become an individual, and it’s plagued by self-doubts. It needs external affirmation of its true identity.

Its gentle “Do not be afraid, Evelyn Smythe” at the end of the story, when it once again asks her to take its gun, is a subtle coda to a complex character arc. It’s no longer torn about whether to slay or live or die. It’s decided its own path. It doesn’t need her to help it remember who it is any more, nor does it need anyone to tell it what to do. 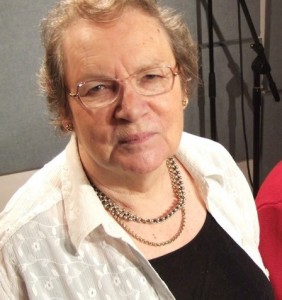 In the earlier scene, I found it a bit of a stretch that the Dalek doesn’t start killing once it acquires a functioning gun. Its last standing orders were to kill, after all. But it’s become a Dalek philosopher, sparing those it sees as rank-and-file soldiers like itself. Its bitter wrath is reserved for those in command. It lashes out wildly at leaders who refuse to lead, or who can’t bear to do the things they order their underlings to do. It passes judgment on its betters, finding them wanting.

So it kills the alternate-timeline Doctor. (Something Evelyn never finds out about— I wonder if her sympathies would have altered in any way). The confrontation between imprisoned Six and the Dalek is another amazing sequence, reduced to a brief grace note in the new Who adaptation. There’s a brief moment in Dalek when the Dalek “demands” new orders, but it’s eclipsed by Nine’s stark revelations about the Time War. And of course, the new series can’t end the scene with the Doctor’s death.

Wheareas in Jubilee, there’s more focus on the Dalek’s desperate quest for a purpose, and on its pathetic hopes that the Doctor will be its leader. Weak and half-mad, the alternate Six bravely responds in the only form of self-determination he has left, defiance: he refuses to tell it what to do. The Dalek murders him in despair and rage, giving him the very release he wanted. You can hear how defeated it feels afterwards, asking to be taken back to its cell. For it, self-determination is a curse; it needs the shackles of a chain of command. Dare I say one feels sympathy for it, after it kills the Doctor? That’s quite an astounding narrative trick.

Oddly, Miriam Rochester is somewhat analogous to the Dalek. I have mixed feelings about her characterisation: she’s scheming to depose her husband not because she wants to take over (or does she?) but because she’s swallowed completely the sexist myth that women are weak, stupid, vapid butterflies. She wants to replace him with a strong consort who can physically abuse her and reenforce misogynist norms. Miriam is one of those examples of problematic satire that tries to subvert stereotypes by exaggerating a stereotype, but in a way reaffirms the stereotype. At the same time, her complaint mirrors the Dalek’s: she wants a leader, someone to put her in her place. Like the Dalek, she wants people to fulfill their proper roles in a rigid hierarchical class structure. Like the Dalek, she’s keenly disillusioned by the Doctor— both versions— for not being the strong leader she seeks. 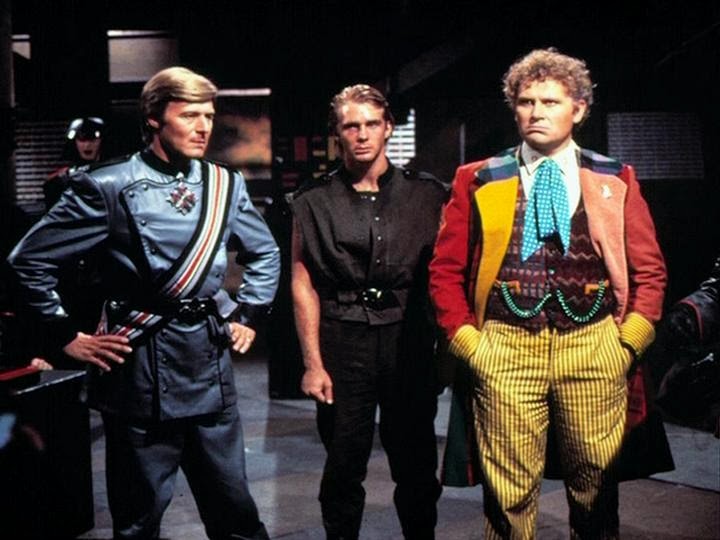 I haven’t a lot to say about the alternate Doctor in the Bloody Tower, but what an incredible image: the man who could escape anything and travel anywhere, deprived of his TARDIS and even his legs by the humans he helped so many times. The scene between him and Evelyn is absolutely heartbreaking. His madness — his refusal to abandon the Tower, because he believes it lets him travel in time and space — is delicately understated compared to Six’s arrogant, murderous post-regeneration madness. His gentle “thank you, my dear” when he finally realises (perhaps) the real Evelyn has come to forgive him is poignantly touching. Colin Baker takes the good material he’s given and runs with it. And Rob Shearman had the sense not to reach for the obvious dramatic set-piece of the Doctor facing off against himself.

The alternate timeline is a plot device straining at the seams. It’s not the first time the Doctor’s “slipped sideways in time,” but this one is particularly messy, with the Dalek invasion force arriving in 2003 and 1903 for reasons I can’t entirely sort out. I understand that the timeline fractured when the TARDIS tried to materialise in two places at once (although I’m a little confused about cause and effect — the TARDIS seems to be trying to dodge the time fracture, yet its maneuver causes the time fracture, by dropping the same Doctor and Evelyn in two different years) How could the Dalek invasion of 1903 be thwarted in 2003, preventing it from ever going to 1903 and leaving behind the mad Dalek that will thwart it in 2003? Isn’t that going to result in a far more significant temporal anomaly than Charley surviving the crash of the R-101? Also, how is the Doctor able to control which version of time manifests, “holding back” the Dalek invasion until Part IV? It’s a big jump from “time sensitive” to “able to regulate conflicting timestreams with willpower.”

I’ll cut Shearman slack for all this, since the alternate timeline is absolutely vital for telling a fascinating story.

Most of all, I find the fundamental difference between Jubilee and Dalek fascinating.

In Jubilee, it’s the humans, not the Doctor, who have become like the Daleks. Not that Six is an entirely good person; he’s the classic Who Doctor with all his ambiguities and contradictions, never explicated, justified or defined by epithets or rules of thumb. He’s also not hate-free: Evelyn, like Rose, calls him on his belief that no Dalek is redeemable.

More importantly, this was back when the Doctor was still the champion of humanity, exasperated but fond of his silly, stupid humans, much like Gandalf with Hobbits. He’s deeply disappointed in Earth for becoming exactly the sort of evil he’s spent his lives fighting against. Ironically, while he was telling Evelyn at the beginning of the audio that her life’s work as a historian has been largely in vain, he discovers during the course of Jubilee that perhaps his life’s work has been in vain!

It is a legacy the Doctor never wanted: becoming the saviour of a society of oppressors. This is exactly the opposite of what happens in the Time War (or at least, the Time War as Nine describes it in Dalek). In that war, he destroys Gallifrey because the Time Lords have become indistinguishable from the Daleks in their evil, a charge he levels against humanity in Jubilee.

Finally, consider this exchange between the Supreme Dalek and Evelyn’s Dalek friend:

“And which are you, traitor or saviour?”
“It is for you to judge.”

The speakers of this exchange are not the Time Lords and the Doctor, but they could be. In a way, that’s the ongoing debate which new Who often poses about the post-Time-War Doctor, at least until Day of the Doctor, when the answer turns out to be less ambiguous and more true to the Doctor of the classic era.