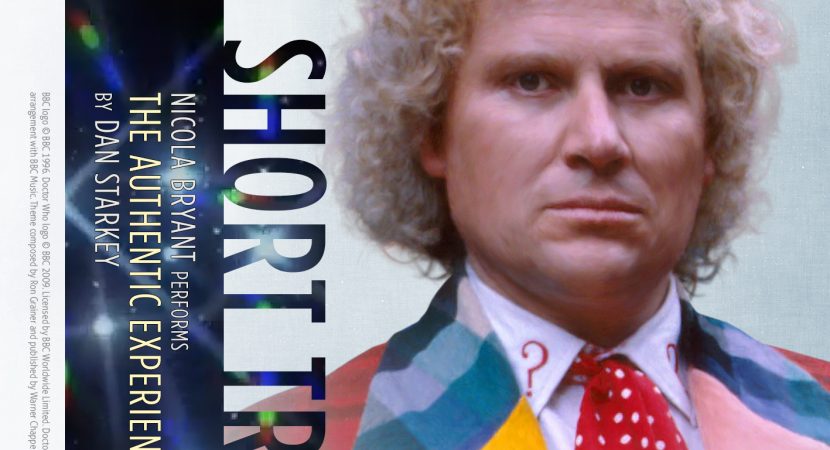 Poor Peri. All the Doctor’s companions have harrowing experiences, but at least most of them get to keep their own skins without feathers, skullcaps or other startling transmogrifications.

The in media res opening for this audio reminded me vaguely of The War Games. We’re not with the Doctor and Peri at all. Instead, we’re immersed in the visceral experiences of a Russian soldier. His grim ordeal takes place in a bleak wilderness, where the crunch of snow or the crack of a jawbone are almost palpable.

By contrast, in some other time zone, the Doctor and Peri are visiting one of the more boring, nondescript places in the universe. It’s a business district that’s about as exciting as an airport terminal. But at least there’s a few shops and booths to explore. The Doctor wastes no time in getting on the nerves of a travel agent who wants holiday-makers, not troublemakers. Just as quickly, Peri gets into trouble.

What’s the connection between these two places, past and future, strange and familiar characters? You’ll probably guess right from the start, but Nicola’s lively performances as various guest characters and author Dan Starkey’s (!) imaginative twist on a classic SF trope make for a refreshingly vivid story. Who knew a Sontaran could be such a good storyteller?

I especially appreciate that when Peri gets into trouble, she’s not helpless, and indeed has quite a dynamic part to play. The Doctor, meanwhile, is his usual irritating yet compassionate self, mustering all his ingenuity to help Peri as well as all the other customers who may be getting more than they bargained for. The teamwork between her and the Doctor is typical of audio Who, but Colin and Nicola were often working against TV scripts back in the day to convey that kind of synergy.

The Authentic Experience is a fun, original take on a popular old SF trope, well worth a trip. As an added bonus, Nicola gets to show off her voicework versatility.

The opening sequence of this audio, reminiscent of The War Games, made me realise something. In some ways, Roman gladiatorial games and their ilk are the forerunners of modern virtual reality games: acting out stories which hinge on dramatic physical conflict, in which the players both know and suspend awareness of the fact that they’re pawns on a chessboard. In many cases, these “war games” are deadly serious for the participants, yet provide entertainment for spectators. In virtual reality, the participants are the spectators.

The Authentic Experience seems at first to be a multiplayer virtual reality/war simulation game. Instead, it turns out to be a radical form of time travel. Just as in The War Games, travelers find themselves in a real, physical place, interacting with actual people in the past. (“Advanced alien technology” serves as a convenient bit of handwaving to allow for physical avatar-bodies projected back in time.)

It’s an interesting riff on the Matrix “dangers of virtual reality” trope. After all, for those living in an era of telecommunications and social networks, augmented reality and holographic projections, virtual reality is just a part of daily life. The more rare and valuable experiences are bodily ones, rich with tactile sensations and physical activities. Except, as the Doctor cynically notes, this “time tourism” is still a sham: the stasis capsules are operating on low settings to conserve power, numbing sensory inputs. A good thing, or Peri would be in a lot more pain during some of her adventures.

Perhaps that’s why she doesn’t seem overly traumatised afterwards. Quite aside from being compressed into one of the unlucky mutts of the Russian space program, her ordeal as “Perry” the soldier has disturbing real-world implications. If she was actually there in the past, physically, then she almost certainly shot and killed some real people who weren’t merely interlopers like herself. Does she know? In a short story, there isn’t much time to go into psychological repercussions. Let’s hope the details slipped from her mind like a fading dream, or that she never realised it was more than a computer simulation.

P.S. American fans, listen closely to Nicola’s narrator voice, which is pretty much her real accent. Can you hear it? She’s played Americans for so long and spent so much time over here that she’s caught a mild case of diphthongs. 😉