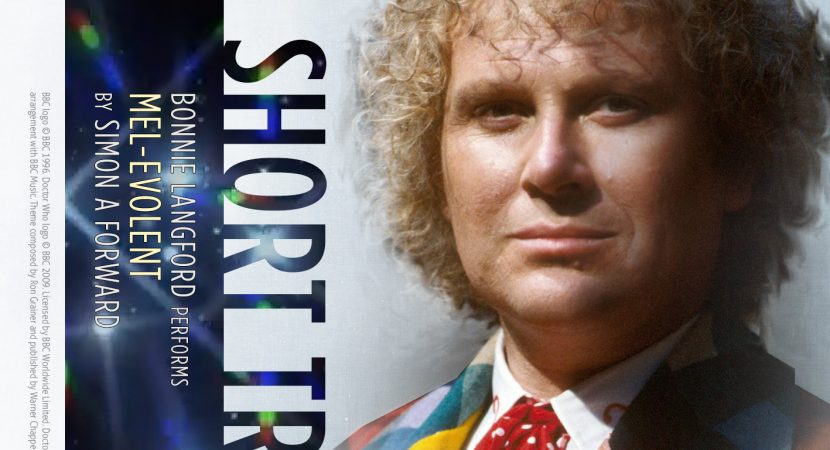 You get the idea. The purple prose settles down a bit. Bonnie evokes her Doctor’s mannerisms surprisingly well (except I’ve learned not to be surprised; most of the Short Trips narrators have that ability).

I’m rather partial to episodes set in the TARDIS. They give us a chance to spend some time with the old girl who’s been the Doctor’s steadfast companion all these years. But she’s taken a turn for the worse. It’s another of those stories where the TARDIS suddenly becomes a dangerous place to be lost in, far from the control room or any way out.

“Can’t have every Tom, Dick or Sullivan breaking in here.” — Sixth Doctor

Not that Mel and the Doctor can abandon ship. They need to track down whatever or whoever has penetrated its defenses. During her investigations, Mel lands squarely on the other side of the Looking-Glass, i.e. Space-Time visualiser, to confront a creepy mirror world where the TARDIS… and Mel… are shadows of themselves. Forward’s aptitude for dreamlike imagery comes in handy towards the end.

This script has a lot of fun if nonessential callbacks both to classic Who and a few audios (there’s a subtle allusion to Forward’s best story I’ve heard so far, The Sandman). Bonnie gets to stretch herself, as does Mel, holding the fort until the Doctor can come up with a cunning plan. The byplay between Mel and Sixie is so comfortable, allowing for their respective quirks and foibles, that it makes one wonder why TV Who had so much trouble making this duo work. And once again, the visuals are stunning. Odd how often that happens in audio.

The antagonist isn’t particularly original— banality of evil, etc— but affords Mel an excellent showdown. And there’s a surprise at the end that strongly reminded me of certain Virgin New/Missing Adventures.

The classic nightmare of floor/stairs collapsing behind you is a Who favourite, isn’t it? Terminus, Scherzo, Time Reef, Prisoners of Fate, Equilibrium, No Place Like Home — boy, the Fifth Doctor’s TARDIS never quite recovered after his companions jettisoned half of it and sabotaged the other half, did it?

The TARDIS theatre is all very well, but those mannequins are a tad creepy. I kept expecting them to move.

Allusions I noticed (I’m sure there’s more): Space-Time Visualiser (yay!) from The Chase, carrot juice and exercise bike from an I’m-too-lazy-to-look-it-up TV episode of Mel and the Doctor, the Roman bath Leela was paddling around in at the beginning of Invasion of Time, [Harry] Sullivan in that cute quote above, the Doctor’s stint as a monster in The Sandman audio, Commander Maxil in Arc of Infinity et alia. And the long-lost time lady reminded me a little of Patience in Cold Fusion.