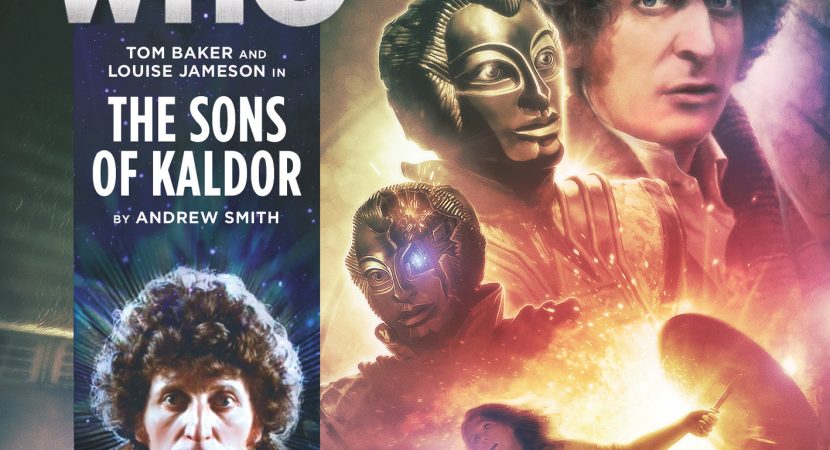 What a great way to start a Fourth Doctor boxset: the first half is a typical 1970s Who episode, but it gets more Big-Finishy (more character and concept-driven, less something-scary-is-happening-doo-wee-oo) after the cliffhanger. Another nice touch: the music sounds low-key 1970s without being over-the-top synth.

So. The Doctor and Leela fetch up on a mostly-abandoned ship on the surface of Kaldor, home planet of the sandminer in The Robots of Death. Evidently, some time has passed since their last encounter with the luxury-loving Kaldorans and their labour-saving robots. (Remember when science fiction kept imagining that technology would give us more free time? Remember? Tomorrow isn’t what it used to be, alas.)

This ship is more spartan than the sandminer— just as well, since running commentary on decor might get tedious. The crew is ominously scarce. The robots are here with all their uncanny valley charisma: not the exact same robots, but the same kinds, from top-dog SuperVoc to chatty Vocs to mute Dums. So what are the glam mechanical men up to this time? And what was this ship’s covert mission before its crew vanished? Are the robots to blame for their disappearance? Or are they pawns on someone else’s chessboard?

Speaking of which, who’s banging on the hatch?

The story opens conventionally enough: our friends explore, realise something’s amiss, get captured, try to win over their captors, and eventually have to pick sides and support a cause. There’s some good twists and turns along the way. However, the second half dials down the adrenalin levels, as mystery-adventure turns into morality play. Leela still has foes to fight, and the Doctor needs to outwit a bully or two, but for the most part Sons of Kaldor becomes a war of words, clashing values, and politics.

Leela: Your people sent one ship?! Not an army?

Our heroes wind up pairing off with guest characters for much of the story: Leela with the robots, and the Doctor with the few Kaldorans they meet. Leela’s interactions with the “mechanical men” are fun character drama, some of the strongest (and, ironically, the most “human”) parts of this story. The Doctor is in his element debating ethics, exercising his powers of persuasion, and improvising clever plans to wriggle out of tight scrapes.

I like the way this story fleshes out the robots in more depth, revisiting Asimov’s principles of robotics, explicitly stating that they have a “positronic brain.” It rehashes in brief some of the same ethical debates we’ve covered in the last forty years of android and AI stories (hello, Mr. Data). But even if the story doesn’t go over much new conceptual ground, its audience is very different than when Robots of Death first aired. Most of us haven’t seen humanoid robots, but we’re becoming accustomed to drones and roombas and remote control toys and other kinds of robots around the home, not to mention computers. Artificial intelligence — a term that didn’t even come up in the original TV story — has made the jump from science fiction to everyday life. In 1977, the Doctor was pontificating about the psychological pitfalls of living with and becoming dependent on robots; we’re now having that same debate about smart devices.

At times, the dramatic tension in this story feels a little… scanty? Yes, the Doctor and Leela face dangers and death threats, but we hear about more exciting things happening elsewhere on the planet. Also, while our heroes help with the immediate crisis, they leave the survivors to tackle their planet’s larger problem on their own. I suppose it’s more plausible for the Doctor not to eliminate systemic injustice and revamp an entire culture in a day.

At any rate, skilled actors and solid chemistry between Tom Baker, Louise Jameson, and the main guest actors make for satisfying listening, even if this is only a smaller-scale skirmish within a larger conflict.

I like the fact that this story riffed on the classism of the “first families” in Robots of Death as well as the question of artificial sentience. It leaves a larger social issue unaddressed: the “second republic” has reverted back to exploiting the native population in lieu of robots. I was half expecting the Feralin (sp?) to throw in their lot with the Doctor and resistance against their oppressors, but I guess that would’ve been too predictable.

I was also a little surprised at Leela’s scorn for Tace when he casually ended a life. While the Doctor has weaned her off Janus thorns, it was not all that long ago that she was ruthlessly dispatching people who happened to get in their way. She now knows it’s frowned upon, but I’m surprised to hear her say it’s cowardly.

On the other hand, Tace’s callous behaviour contributes to the main subtext of this story: some “humans” (or their equivalent) are less humane than robots. It’s not Robots of Death but Kaldorans, in this particular tale.

I loved the way Leela befriended and protected the “mechanical men.” Getting to know to K9 has broadened her horizons.

And now I need to boot up Britbox and watch The Robots of Death again, because it’s been decades since I last watched it.

ETA: Watched it, and it’s improved with age. Several characters in the original story demonstrate exactly the kinds of psychological neuroses regarding robots that Tace complains about. But he’s wrong: people aren’t just imagining the robots are self-aware persons; these really are.