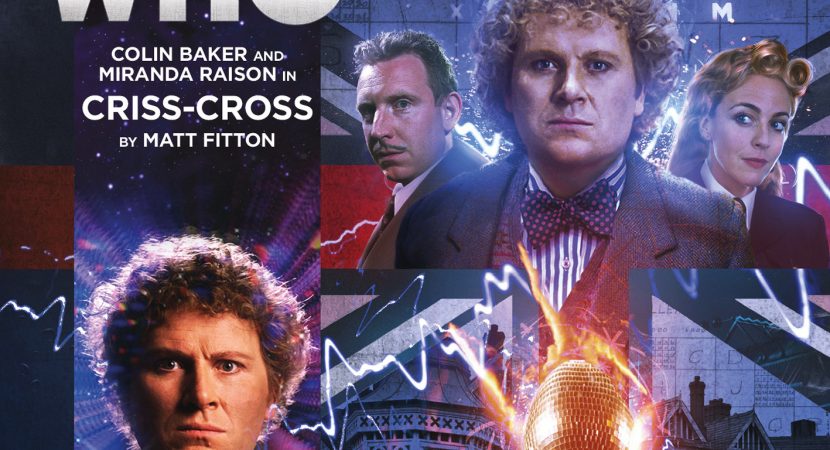 A lively, historical spy thriller with a side helping of aliens provides a strong entrance for a new companion, Mrs. Constance Clarke.

The codebreakers of Bletchley Park, Churchill’s metaphorical “geese that laid the golden eggs but never cackled,” are swept up in the Doctor’s wake of adventure thanks to an otherworldly egg. The Doctor, despite his best efforts, is stranded hip-deep in history. He commandeers the mathematical skills of the “wrens” to help him escape before he accidentally changes the course of the war. Of course, it won’t be that easy.

This story starts out small and gets more and more complicated, with spies and German agents, twists and danger on both land and sea (or rather, under it). Agent Spark is a classic Doctor Who foil, an ambiguous character for a good stretch of the story. The non-English characters are three-dimensional, which BF doesn’t always have time to do. Even the side characters, the wrens and Major Harris, stand out in this crisply-plotted audio. There’s a feel of purposeful “keep calm and carry on” that prevents the story from spinning out of control and the characters from being overwhelmed by the crisis.

Mrs. Clarke: Where is Dr. Smith? He was the one who wanted to leave in a hurry.
Wren Wimpole:  He still does, ma’am. Look! In the mirror!
Mrs. Clarke: Well! I’ve never seen a boffin with such a turn of speed.

The alien— for there is one, just to make the Doctor’s attempt at noninterference even harder— is a fairly original concept. (Although, this being Big Finish, they’ve covered just about every angle at some point, and I can think of one or two previous aliens that are somewhat similar). I’m once again having trouble deciphering alien voices put through a modulator, but then, it’s very alien, so to some extent that’s warranted.

The Doctor spends a little too much time soliloquising about redoubtable humans (meaning the English in WWII). Nevertheless, a salute to the nerds of Bletchley, forgotten for decades because their work was top secret, seems like an overdue homage from geeky Doctor Who. I appreciate that their brains and nerve prove crucial during the climax.

Miranda Raison as Mrs. Clarke is a smart, self-sufficient, capable companion. She quickly grasps things well outside her experience and faces danger with the resilience of an officer of the Women’s Royal Naval Service. Apparently Miranda had asked about becoming a companion after playing several guest parts, so she’s well-versed in Doctor Who and slots in easily with Colin Baker. I like her somewhat formal 1940s RP, although she occasionally comes off a little wooden because of the character’s brisk, no-nonsense personality. As we’ve seen from Evelyn Smythe, Six does best with a formidable personality who won’t let him push her around.

In short, it’s a solid drama that keeps listeners on their metaphorical toes, and it goes without saying that even when he’s waxing grandiloquent, Colin Baker is superb. I’d heard Constance first in The Last Adventure, and I’m looking forward to hearing more from her as I continue to play catch-up.

Trivia note: When Harris is checking Mrs. Clarke’s background, he says she’s from Nyasaland, a British colony in Africa which is now modern-day Malawi.

I wasn’t sure why Mrs. Clarke decided to bolt with the Doctor right after hearing her husband was (for the moment) alive. She was so responsible and duty-bound that it seemed out of character. After a re-listen, I think I understand: she was afraid her husband was about to land in hot water for sending her an unencrypted signal, and she thought it might be better for him if she made herself scarce to avoid questioning from his superiors. I’m still a little fuzzy about that. (Wouldn’t her disappearance make his situation even more awkward?)

[Edit: After listening to the extras, it’s clear that Big Finish (and Alan Barnes, who conceived the character) has some sort of arc in mind for Constance, so there may be a reason we’re not yet privy to as to why she suddenly decided to make herself scarce. ]

I am relieved that the story dispensed with the “Doctor suspected of being a spy” trope by the second half. It’s a good trope, but it’s a tension-builder that’s not very fun. Mind you, it was particularly warranted in this case, since he’d infiltrated a top secret installation. (A call to new Who’s Churchill might’ve punctured that tension in a boring off-stage way, so I suppose it’s just as well they avoided it.)

Instead, Harris defied expectations and took in stride the revelation of an alien in their midst without needing a call from Whitehall to tell him to. Harris became a sort of Lethbridge-Stewart figure, although he proved in the end more ruthless (as the Brig has been at times) and more doomed.

Agent Criss-Cross really did managed to fool me, even though it occurred to me early on that he might be working for the alien(s). I’d forgotten my suspicions by the time he put his cards on the table.

In fact, I was puzzled as the third cliffhanger approached: it felt like the story had all wrapped up with all threats eliminated too easily. I’d expected Major Harris to clap the Doctor in irons and antagonise or try to seize the Waveform as a weapon, resulting in needless chaos and conflict for the final episode before the Doctor renegotiated a truce. It was a pleasant twist to have the military chap act in a clear-headed manner, the Doctor make a serious mistake in trusting this alien, and the double agent exactly as shifty as he seemed to be in part one.