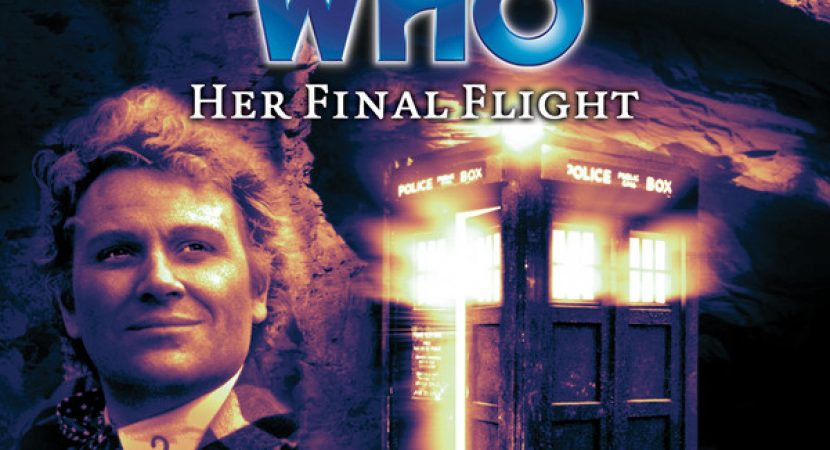 Wow. That was a heck of a ride. Hearing this audio on the heels of The Maltese Falcon was mood whiplash. Some listeners will prefer the latter, but I confess my tastes run to hurt/comfort and character angst more than lighthearted noir satire.

This story is a terrifying ordeal for poor Sixie. Someone has got it in for him, but he’s too busy stumbling through a series of unfortunate events after crash landing on a backwater planet to notice.

The silver lining to the Doctor’s navigational woes is that he fetches up in the hut of his old friend Peri. It’s nineteen years since she last saw him— or is it? — and now they’ll have a second chance to rediscover their friendship. Assuming the local high priest (voiced by Conrad Westmaas, aka C’rizz) doesn’t decide to burn him at the stake first.

Sacrilege is soon the least of the Doctor’s problems. Religious fervor is masking a growing catastrophe which may soon overtake everyone in the village, including Peri. The Doctor is determined not to fail her again. But what if it becomes a choice between saving her— or the TARDIS?

Doctor: I can promise you with every fibre of my being, I won’t let anything like that happen to you again.
Peri: Be careful what you promise, Doctor. One thing I’ve learned is that you never know when a bigger wave is going to rise up and sweep you off your feet.

This was the first time Big Finish toyed with the idea of bringing back Peri after her TV departure. I love the way Nicola subtly conveys that she’s older, wiser, and more able to roll with the punches. The dynamic between her and the Doctor reminds me of Nyssa and Five in the audios: the power imbalance between Doctor and companion has been adjusted so that they feel more like partners, colleagues, and friends rather than “assistant” and “hero.” (New Who would take a page from Big Finish in that respect.)

The chemistry between Nicola and Colin is comfortable and a joy to listen to. I was also pleased to hear from Jonathan Owen again, playing the village headman Hamiyun. He voiced Erimem’s right-hand-man Antranak back in The Eye of the Scorpion, and he’s using that same rich Shakespearean delivery that’s like high-class chocolate for the ears.  The funny thing is that I mistook Rashaa (Heather Tracy) for Nicola putting on her snootiest RP rather than Peri’s American accent. I wonder if that ambiguity was deliberate or a happy accident to make the listener suspicious?

If you’re wondering how Her Final Flight fits or contradicts The Piscon Paradox (which I haven’t yet heard) and The Widow’s Assassin— it doesn’t, although I can’t explain why without spoiling it. All I can say is that this is one of those stories where the Doctor is pushed to his physical and mental limits. Colin does a masterful job of conveying his determination, his desperation, his confusion and his courage as he keeps trying and failing to save the day. This is the noble Six who shone through in Trial of a Timelord, and in an odd way this is his Androzani ordeal.

(Site note: I’m still working on my “catchup” reviews, trying to cover recent BF audios of the past two years up to the present, but those two gaps in my old “listen-o-thon” were nagging at me.)

The Nekkistani race had been established in The Apocalypse Element as another time-faring race who would reappear later in Gallifrey.

There’s one unresolved thread at the end of this story: The Agent. Big Finish seemed to be trying to establish a new recurring rival for the Doctor; they tried again with The Game a few months later. Neither enemy (they’re clearly not the same) ever appears in any subsequent audio. The Agent, at least, was truly menacing rather than merely sleazy, but he’s a blank slate.

I’m not sure why Big Finish was so set on creating a new audio arch-enemy for the Doctor when they had recently come up with a successful kludge to bring back Crispy!Master in Dust Breeding. One can think of several reasons: keeping Beevers for special occasions, or Crispy’s physical limitations made him work for only certain kinds of stories, or perhaps Beevers’ availability was in question.

Come to think of it, one of BF’s invented arch-rivals from the early years did go on to become a thorn in the Doctor’s side: Nimrod. But nowadays, apart from perhaps Davros, the Doctor’s most dangerous arch-enemies and foils are almost always Time Lords.