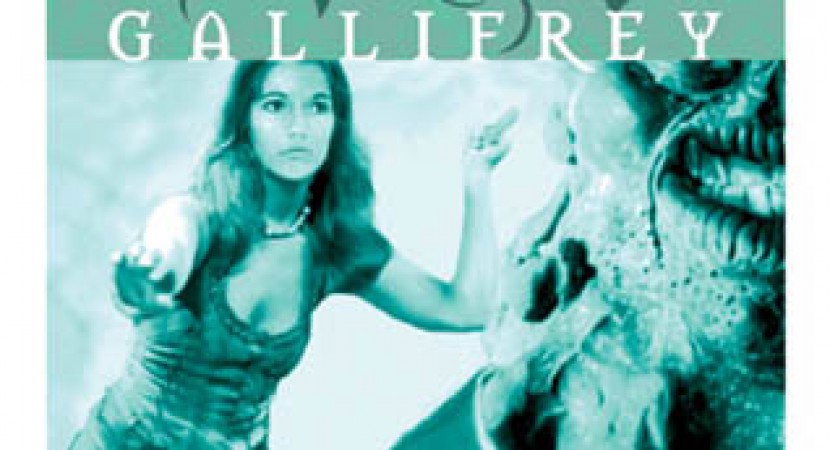 This is when I knew Gallifrey was going to be the gift that kept on giving.

It wouldn’t matter to everybody, but for a woman who grew up on Doctor Who and other SF from the 70s and 80s— what a breath of fresh air, to have a serious political/SF drama where the majority of lead characters (President Romana, Leela, Hossak, Lexi, Baano) just happen to be women. It doesn’t sound that novel, does it? But if you watch Doctor Who or almost any SF series, to this day, it’s nearly always the other way around, to the point that it was striking when Moffat did it for The Zygon Inversion.

All right, but how good is the story? Engaging and enjoyable. This is a followup to the ill-fated peace conference in The Apocalypse Element, a meeting between races with time travel technology attempting to hash out ground rules for its use. Naturally, the other temporal powers don’t trust Time Lords’ dominance, Time Lords act as if they have the right to dictate to everyone else, and there are unsavoury secrets to be concealed or spied upon. Romana sends Leela to spy upon the spies, recognising that “primitive” does not mean “stupid” but that most people (including the Fourth Doctor) aren’t perceptive enough to understand the distinction.

The Monan Host emerge once again as an interesting alien race serving as foils (or allies, or opponents) of the Time Lords.

Backstabbing among delegates in this sort of story is obligatory, but there’s a clever timey-wimey element to put a unique spin on the trope. The setting of the conference, with robot servitors and exploited showgirl entertainers, is almost more important than what’s going on around the conference table, forcing Leela to confront the sort of “for the Dads” sexism that dictated her real-world character design back in the 70s. She doesn’t have much patience with it.

Leela is really the breakout character, charming us with her charismatic blend of childlike purity, warrior’s ferocity, honesty and honour, and empathy and care for the weak. It sets her apart from everyone around her, making “noble savage” more than simply an ugly phrase from European colonialism. Less pure but still noble (at least in principle), Romana is a formidable diplomat and tactician, swooping in as needed when her behind-the-scenes leadership isn’t enough. Braxiatel continues to act as her trusted advocate, with Miles Richardson’s amazing voice blending the right mix of gravitas and smarm. Meanwhile, irritable CIA Coordinator Narvin continues to butt heads with Romana’s idealism.

It’s a fun, well-paced, meaty story. The only minor blemish is the antagonist, who turns out to be a bit flat.

Is it just me, or did Hossak sound like she was being voiced by Carole Ann Ford during the early going? Not in the hysteria towards the end. I was mildly disappointed at the somewhat Scooby Doo villain motivation, only because Gallifrey is usually very good at creating antagonists with complex, believable, even principled motivations. The Monan renegade faction in this story, for example, has good reasons to gripe.

Narvin is another antagonist in this story (maybe) who has some justification for his stance, although his “ends justify the means” approach is problematic. I loved Romana’s dressing-down of Narvin at the end. That is going to have repercussions. I can’t say too much about it without spoilers to later seasons, but it’s fun seeing how deceptively simple Narvin is in the early stories, back when Romana was still able to keep her hands clean.

In retrospect, it’s fun to track the slippery slope of Gallifrey’s well-intentioned yet shady dealings. I’m curious at what point Big Finish began to incorporate or at least keep in mind RTD’s new Time War canon and Gallifrey’s descent to the Dark Side. To some extent, the influence may have been the other way around: RTD knew and loved Big Finish enough to reference The Apocalypse Element as the beginning of the Time War, and he selected some Big Finish scripts to be adapted/rewritten for his show. What was the cross-pollination between reboot Who and Big Finish, and when did it happen?

For reference: New Who was announced in September 2003, RTD made his initial pitch to his production team in December 2003, and production went into the planning stages in early 2004. Gallifrey series one had to have been written and recorded before any details of the Time War were leaked. Gallifrey series 2 was released starting in April 2005, one month after Rose was broadcast, so again, I think the writing/recording of Gallifrey had wrapped up before the Time War bombshell aired. The question is whether Big Finish had any insider knowledge of what RTD was planning for Gallifrey prior to reboot Who’s broadcasts. I suspect not. In which case, Gallifrey series 3 in May 2006 was probably the first to be informed by RTD’s ideas.