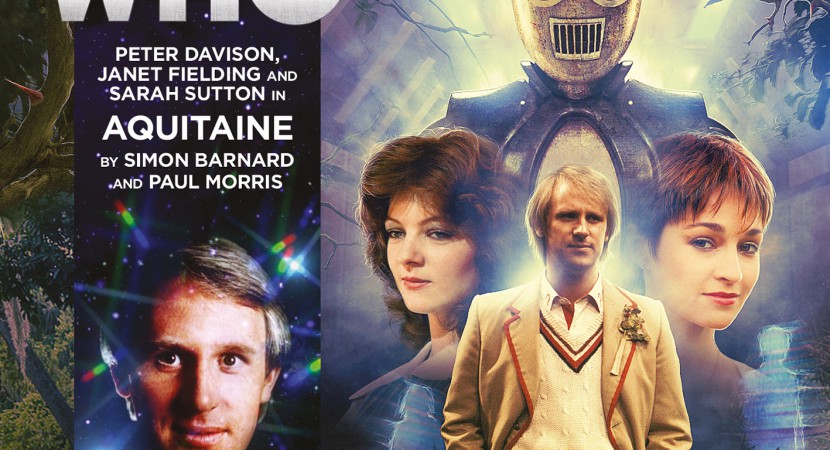 I haven’t had this much fun with a classic Who action-adventure in a while. It’s going in my “just for fun” Team Five playlist along with Emerald Tiger and Cradle of the Snake.

The Fifth Doctor, Nyssa and Tegan land on a haunted spaceship where the crew have gone missing, and the sole inhabitant is a robot butler named Hargreaves. Hargreaves is a hoot. Or possibly a threat? The Doctor is skeptical about ghosts, of course, but how else to describe the creepy goings-on? And what’s with the gung-ho garden? The situation turns from spooky and slightly comical to serious when people start appearing and disappearing. The one constant is the erstwhile Hargreaves, and his memory isn’t what it used to be.

Hargreaves: “Jeeves”?
Nyssa: I think that must be an Earth joke, Hargreaves.
Hargreaves: Very good, madam.

There’s some derivative elements in this story (“Hey, they did that back in episode so-and-so”), yet they fit together with a lot of heart. The ending is original and clever, with all the rushing around of a TV climax. In fact, the pacing of the last half hour felt more like new Who. But the rest is what classic does so well: no Oncoming Storm superhero Doctor, just a well-intentioned space wanderer blundering around trying to figure out what’s going on, trying to help, and trying and failing to keep his companions out of danger.

Better still, unlike TV Who, Nyssa isn’t helpless when she trips into the damsel-in-distress penalty box. She’s an intelligent young lady who thinks on her feet, and she has a few strokes of brilliance worthy of the Doctor. Tegan, as always, is the more dynamic of the two, as well as the voice of common sense and snark. The latter usually camouflages the former, but her shrewd insights nudge the Doctor’s own thoughts to help him find answers. This is the Fifth Doctor at his best: ethical scientist, time travel expert, and reckless hero who improvises furiously while scrabbling for a rabbit in the bottom of his hat at the eleventh hour.

I love all the classic Doctors, but Team Five is my favourite era, which means I hold their stories to higher standards. They’ve had some watershed Main Range stories over the past few years, the kinds of epic dramas with unforgettable character moments that would trigger a firestorm of heated fan discussions had they been broadcast on TV instead of audio (sigh). But much as I enjoyed the ride, those stories were emotionally exhausting: War and Peace,  as Sarah Sutton put it in a recent interview. It was time for a good old-fashioned adventure without quite so much character arc and angst riding on its outcome.

Waters of Amsterdam was something like, but Aquitaine is exactly what I was hoping for. It goes to some dark, nail-biting places, but it’s also funny, fun, and just plain entertaining. In the midst of the action, there’s snatches of interaction during which I said to myself, “nailed it!” I enjoy scenes with characters we’ve known and loved for decades acting so much like themselves. The Doctor’s descriptions of his companions made me laugh, and Tegan’s brief remarks about her friends were a haiku love letter, blunt Australian style.

There’s a little of everything: timey-wimey, ghosts, monsters, horror, glimpses of character, an endearing robot, spooky horror and excitement. The ending sews up everything in a burst of action, wits and just a smidgen of hand-waving. Also, there’s tea. What’s not to like?

A minute quibble: just once, I’d like a story in which the chap with the thick Russian accent turns out to be the only sane crew member and a profoundly decent human being.

I’m going to revel in the fact that Five saved the day without a “there should have been another way” finale. It’s a breath of fresh air. Big Finish likes to undermine the Doctor, exploring his flaws which the classic show glossed over. Shortcomings add depth, but it’s starting to feel like poor Fallible Five can never win anything but a pyrrhic victory. Let him be the knight in beige armour now and again, for goodness’ sake, provided that his companions retain their agency and accomplish more than just asking questions to prompt exposition.

I didn’t talk about the secondary characters because I was trying to avoid spoilers. In this case, part of the mystery is whether they’re still alive! Hargreaves is a head above the rest (pun intended), but Dr. Akunin is effectively menacing, while Captain Maynard and Savinio come to life very nicely in their limited scene time. Poor Nyssa tries to play Doctor and rescue the crew, forgetting how often the response to the Doctor’s timely help is to clap him and his friends in irons. Her exasperation when Captain Maynard plays to type is a subtle bit of character development: Season 19 Nyssa would’ve been flummoxed, whereas post-Arc Nyssa turns the tables. Tegan hasn’t much to do in this story other than corridor crawl and spew entertaining dialog, but her scenes with Servinio are good character stuff, especially when she guesses he’s glommed onto her as a substitute girlfriend. Yikes.

Also, it’s a very minor thread, but I really appreciated the way this story picked up on Tegan’s close friendship with Nyssa. (I’d like to hear more of the the reverse, too.) I keep harping on the fact that this is the only TV TARDIS team with two women since the One Era, yet they don’t often show the rapport that’s typical of real-world female friendships. Look at Erimem and Peri, or Nyssa and Tegan working together in Castrovalva. Why doesn’t that happen more often? They’re separated for most of Aquitaine, but at least you hear how much Tegan cares about her friend and how well she understands her. Those were lovely moments, partly due to Janet’s delivery.

(And yes, I know they were working together for much of Waters of Amsterdam, but Part One was such a stereotypical, extended “girls gossiping about guys” sequence that my Bechdel Test circuit breaker had already exploded.)