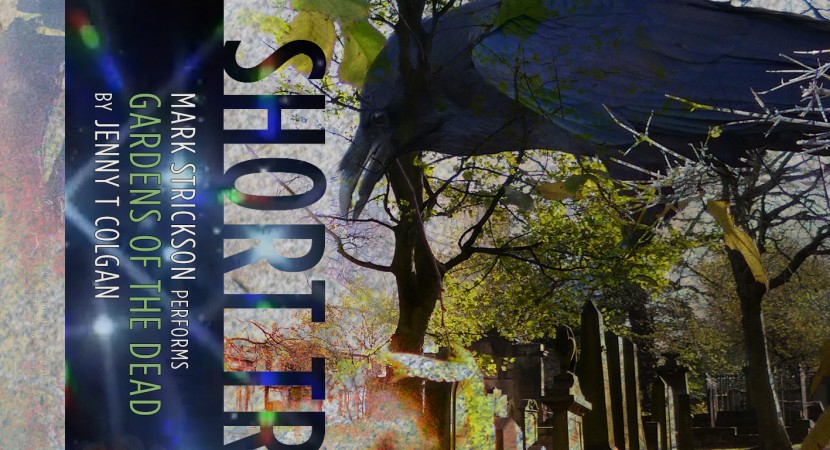 This was a fun short story that made me grin from ear to ear. (That’s not the real cover art, by the way; I was mucking around with Photoshop again.)

If you’re fond of shifty, sardonic, urbane Turlough with his spine of silly putty and his heart of gold, you’ll definitely want this one.

“Are you all right?”
I opened my eyes again. Little Nyssa was looking up at me, nothing but kindness in her face.
“Leave him,” said Tegan. “He’s putting it on.”

I’ve only heard one other audio narrated by Mark Strickson, Ringpullworld. That was a comedy.I loved Mark’s hilarious impersonations of Janet and Pete. Obviously, he can’t really match their voices, but he conveys Turlough’s unflattering impressions of them superbly (just as Sarah Sutton’s solo forays hint at Nyssa’s love and respect for her friends).

So I’d expected another entertaining farce with Turlough-isms and a certain amount of insightful satire of his shipmates. It is that… for the first few minutes, which had me hooting with laughter. Author Jenny Colgan exploits Turlough’s wry blend of guile, snark and melancholy beautifully throughout the audio. But it soon turns serious, eerie, exciting and dangerous. There’s a few nightmarish moments.

After dropping off a couple of Brigadiers from Mawdryn’s ship, the TARDIS make an unscheduled stop in the Gardens of the Dead. All two of you familiar with Final Fantasy X will understand what I mean when I say it’s the Farplane. The rest of you will have to guess from the title so I don’t spoil too much.

Of course, a spot of tourism rapidly turns pear-shaped, and there’s lives to save and mortal dangers to thwart, not all of them Turlough’s fault. Everybody gets a piece of the action, including the Black Guardian (Mark channels Valentine Dyall better than I could’ve imagined). Tegan’s role is mostly limited to sniping and shrewd guesses about Turlough, while the Doctor has some poignant and apt character moments but is mostly sidelined to give companions more to do. Turlough is once again the lamest assassin ever, leaving us to wonder what the Dead Bird Hat Society ever saw in him. The real surprise is several quite touching interactions between Turlough and Nyssa, something they never had a chance to do on TV (to Mark Strickson’s apparent regret).

There’s one disconcerting problem with this audio: it seems to forget Big Finish’s older!Nyssa arc, in which she and Turlough became friends. I can fanwank various ways to make it work, almost. But I don’t know why someone at Big Finish didn’t fill in the author, since she was obviously familiar with and evoking the spirit of Season 20.

Still, it’s a small point, and such a good audio otherwise that one can easily ignore that minor continuity glitch.

I’ve been watching as my online friends purchase and listen to this audio. Five of us independently had the same reaction: “I LOVED IT SO MUCH.” I can’t really put my finger on why. It’s only 30 minutes, hardly enough time for a plot, and the science is barmy. But in terms of spot-on character portrayal, tasty little character interactions, dramatic scary moments with vivid imagery, and Mark’s great delivery, it just…worked.

It’s definitely going on my “fun Big Finishes for when I need a break from angst” playlist.

(I’m pleased to see a female writer and director. I suspect it’s happened with some of the Benny and Iris audios, but that’s still a rarity for Doctor Who.)

Okay, I’m going to talk shipping (of a sort). So if that kind of fanwank turns you off, exit stage left (preferably by browsing one of my shipping-free reviews elsewhere on the site).

In my little circle of Big Finish fans, there’s been some discussion about how the characters of Turlough and Nyssa have quite a lot in common, aside from, you know, that whole sworn-to-kill-the-Doctor business. They were both upper-class alien orphans, and comfortable with advanced technology. Nyssa was understanding of her shipmates’ peccadilloes, so she was likely to forgive Turlough once he was no longer actively trying to kill the Doctor. (Nyssa is a bit funny about that. Ask the Chancellery Guards on Gallifrey).

But we never got a chance to see them develop a friendship on TV.

The older!Nyssa audios gave the two characters a second chance to develop a rapport. In my opinion, it was one of the best things about that arc, albeit a subtle one. If you think about it, Nyssa’s friendship with Tegan wasn’t handled as often or as deftly. Whereas there were many times when Nyssa and Turlough worked together as a team, with Nyssa tending to act as deputy Doctor and call the shots, while Turlough backed her up and watched her back. A classic example was in Butcher of Brisbane, where he became her secretary.

It was lovely watching that relationship develop, something that TV never envisioned (but fans did, inspired largely by one preposterously misleading S20 photoshoot showing Nyssa and Turlough horsing around together and flirting over a TARDIS manual). However, due to the age gap, it couldn’t be a boy-meets-girl friendship. Nyssa was old enough to be his mother, married, and more experienced. So their dynamic was more like captain and lieutenant, or Mom and college-age son, or boss and secretary (which actually happened in one audio).

This audio didn’t show a friendship between younger!Nyssa and Turlough either— there was simply no time for it— but it illustrated the possibility, hinted at what might have been had she not gone so soon. And it was… unexpectedly sweet. Turlough’s solicitousness of her, his (let’s face it) mild crush on her added a few more brushstrokes of colour to his cynical, pragmatic, untrustworthy, cowardly, yet likable character. His dilemma over whether to save her, and his desire not to disappoint her faith in him, tighten the thumbscrews on his nervewracking deal with the devil.

I loved Turlough’s wistful remark abut how “that girl” probably never thought of him as anything but “that silly schoolboy,” even sadder since in fact he was nothing of the sort.

The Turlough-Nyssa dynamic wasn’t the only reason this was a fun audio, not by a long chalk. That was really the best use of the Black Guardian ever; despite his idiocy in relying on an incompetent assassin, he was genuinely terrifying. But I confess that it’s is the reason why I and a friend— the very friend who got me into Big Finish, in fact— were hooting to one another in ALL CAPS while listening to it. Finally, after all these years, we have an explanation for that impossible Nyssa/Turlough photoshoot. Looks like the lad was handy with the Trion equivalent of Photoshop, moping over might-have-beens.

To think I didn’t like Turlough when I was a youngster. How can you not love a brave coward, a bungling assassin who keeps accidentally rescuing people, a fundamentally good person blackmailed into doing evil, and a pragmatic cynic with a soft spot for the most innocent companion since Victoria? 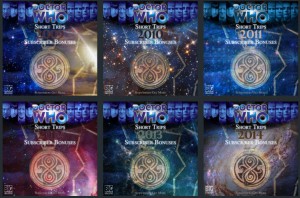