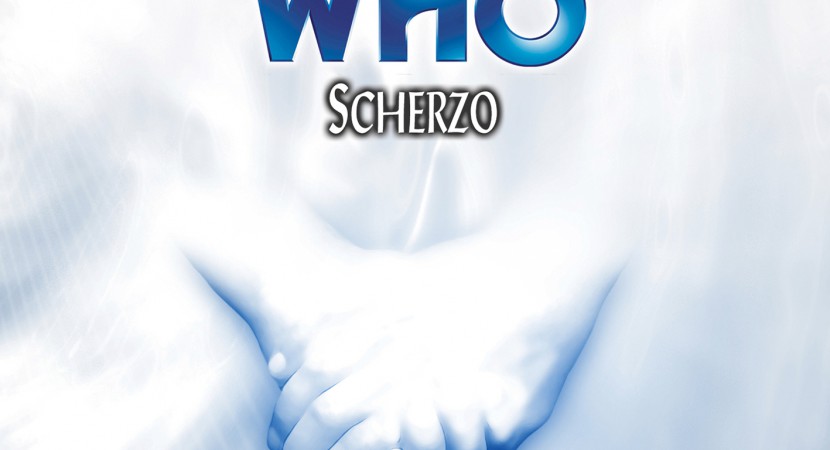 At long last, I’ve joined the club of listeners traumatised by the psychological horror of Scherzo, set in the Divergent Universe established in Zagreus.

Have a trailer. (Warning: Loud.)

This is definitely not a Big Finish you should tackle until you’ve travelled with Charley and the Doctor for a while, up through Neverland and Zagreus. If you’ve heard Chimes of Midnight, you have an inkling what you’re in for: a compelling Rob Shearman stage play that blends character study and the macabre.

“Don’t worry. I daresay even our capacity for fear will fade eventually.” — The Doctor

It’s a two-hander between the Doctor and Charley, a drastic contrast from the cast party of the previous audio. This story tackles the question of the Doctor’s love for his companions head-on. Once again, it’s important to remember that this came years before the new series, venturing into uncharted waters. The Doctor had sacrificed himself for a companion before, but he had never professed to love them. For that matter, none of them had said “I love you.” This script refuses to leave that sentimentality unexamined.

A scherzo (/ˈskɛrt.soʊ/; Italian pronunciation: [ˈskertso]; plural scherzos or scherzi), in western classical music, is a piece of music, often a movement from a larger piece such as a symphony or a sonata. — Wikipedia

Scherzo is a powerful experiment and a deeply disturbing story— and this from someone who wasn’t ruffled by Chimes of Midnight. There’s visceral images and sounds that are difficult to sit through. The frank, jagged conversations between the Doctor and Charley are in some ways more difficult than the horror-plot.

I need to sit and think about Scherzo. I’m not sure I like the portrait of the Doctor, although it’s certainly an intelligent take. In some respects, it chucks out what made Eight lovable. Charley, for her part, is just trying to roll with the punches, in a strong performance by India. The story rushes by surprisingly quickly without ever entirely explaining what’s going on. I hope and presume that will be addressed in a future audio.

Despite my reservations, I appreciate Scherzo’s function as a crucible, distilling Doctor Who down to one of its fundamental pillars, the Doctor/companion dynamic, in order to examine it critically. The creatively horrific imagery is also very striking, even by Rob Shearman standards. Why is that man so obsessed with eating?

Trivia note: Paul and India recorded the whole thing “as live, in one take.” Impressive.

One of the things I like about this story is that it dares to ask: how could one even exist in another universe? It comes up with the only logical explanation possible: some kind of artificial intervention. (Come on, Doctor, you should’ve guessed you were in a ring-shaped test tube sooner.) But by whom? And how? And why? There’s a lot of hocus-pocus science: when evolution leads to a life form that dominates and squeezes out all the rest, the system collapses and has to start over; healthy evolution leads to a complex interdependent biosphere of millions of organisms. But none of that is the focus of this audio. It’s all symbol, psychology.

Doctor Who and many other SF stories have tackled sound-creatures before, but this is a particularly vivid one.

One thing that baffled me is the engaging yet disconnected fairy tale frame that we hear between episodes. It sounds like an explanation for the area where the Doctor and Charley have arrived, but it isn’t: they didn’t enter the darkness, and the sound-creature they encounter seems to have been born with their arrival, so it can’t be the one that ravaged the apocryphal kingdom— can it? I tried to sift out some symbolic analogy between the king and the Doctor, but it’s not a good fit.

I was also a bit nonplussed by the psychological/philosophical conundrum at the end. I understand the creature trying to argue that the Doctor’s been willing to die for others before, so it has the stronger will to live and is therefore more fit to survive (although I’m not sure “will to live’ qualifies as fitness). What baffled me is the argument that since the Doctor died out of love for Charley, it’s no different from his dying for a stranger. No, it isn’t. Dying for love and dying for altruism are different motives.

The Doctor and Charley’s falling-out is a great bit of theatre, but neither of them comes off very well from it. Eight seems to be reverting to the alien Fourth Doctor alien, faintly intimidating and callous. I’m not very sympathetic with the Doctor’s bratty resentment of Charley, which feels uncomfortably like a friendzone accusation: he was nice to her, so now she owes him her life, even if she didn’t ask for his sacrifice and in fact had wanted the opposite.

The Fifth Doctor was just as (or more?) self-sacrificing, including dying for Peri and offering his lives for Tegan and Nyssa (Mawdryn Undead, countless audios) or even Adric (Castrovalva), but he was graceful about it. I suppose it would’ve been different if they’d sacrifice themselves for him right afterwards — although Adric did, in a way— but despite Five’s sulky, irritable side, I can’t imagine him going all high-and-mighty “you silly girl” and going entirely frosty on, say, Nyssa, for daring to follow him. There might’ve been a heated exchange as in Spare Parts, but not the terrifying disinterest and coldness that Eight displayed throughout most of Scherzo.

It’s hard to trace back through all the convolutions of Zagreus and Neverland, but, essentially, Eight is furious for Charley not honouring his sacrifice, when he refused to honour her sacrifice.

It’s a realistic and very human way for characters to act when they’re scared, lashing out and pushing friends away. But it’s a nasty side to Eight who was, prior to Zagreus, one of the Doctor’s most sweet-natured and understanding incarnations. It feels like the old Eighth Doctor we knew and loved, the one with the exuberant joie de vivre who was so friendly he’d plant a smacker on his companions in a fit of exuberance, didn’t survive his run-in with Zagreus. It’s a bold move to take away a lot of a character’s appeal.

Most of all, I’m uncomfortable with Eight embracing the Time Lords’ cynical assessment that, deep down, he keeps companions around for memento mori rather than for friendship.  It’s a clever idea, but it saps away most of the meaning from the series. I can’t accept it. I can only accept that the Doctor’s entertained various insensitive thoughts and dark moods in his long life, and recent ordeals plus the current awful situation have put his mind in a very dark place.

Also, while she saves his bacon several times in this audio, Charley is largely reduced to desperate pleading, something she’s done quite a bit in the past few stories. Her distress at the Doctor’s shattering revelations is understandable, but at this point I’m ready for both of them to stop wallowing and move forward.

I expect they will.