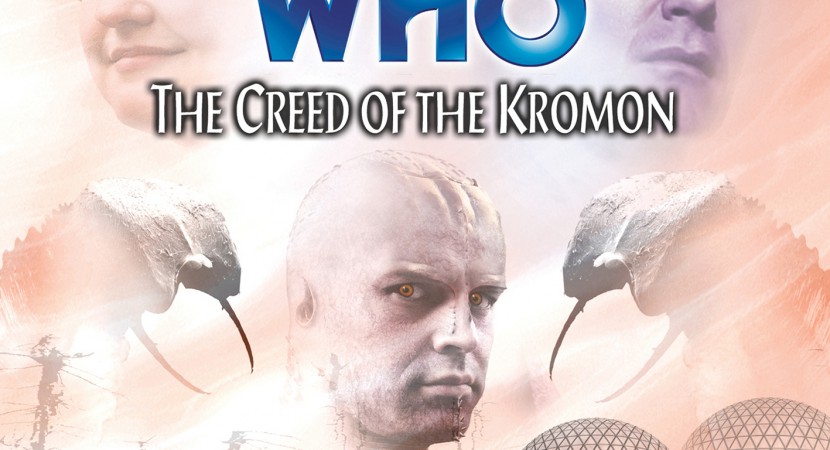 That’s not quite fair. There are new story elements in Kromon, but the overlap is noticeable, from the companion shelved for an episode or so undergoing scientific experimentation, to the Sil-like corporate insects speaking in Camp Villain. Alas, there’s no charismatic governor or reality TV satire to add leavening to quite a lot of corridor-crawl.

A pity, because the audio started out so well. It begins with Charley and the Doctor having to pass a mindwarping entrance exam before landing in a parched, inhospitable world ruled by sentient ants. New companion C’rizz is lucky enough to run into the Doctor and Charley while fleeing captivity. They have some good character bonding scenes, allowing us to get to know him: a bit stiff, hotheaded, passionate, decent-hearted, and more of a lover than a fighter. Then the mindnumbing plot butts in. His masters recapture them, and the rest of the story consists of escape, recapture, escape, recapture. With a side helping of body horror that I found very difficult to listen to.

“Charley, say hello to the first person we’ve met in our new home.” — The Doctor

The main problem is that the Doctor does almost nothing to help his friends in this story. Instead, a charismatic giant furry critter shows up from time to time to provide companion-saving services. Without its intervention, the Doctor alone would’ve escaped.

There. I just saved you two hours. I think this might’ve been a good three-parter, but there simply wasn’t enough plot for four.

To add insult to injury, the Doctor and Charley revert to the feckless curiosity-seekers of The Stones of Venice. Which would be fine, had Eight not undergone some fairly drastic character transformations over the past few stories. You’d think Zagreus and Scherzo had never happened. I suppose I did say it was time for them to stop wallowing and move on with new adventures, but I’d rather hoped to hear them sharing adventures together.

All in all, an inauspicious introduction for Conrad Westmaas as C’rizz, although he’s likable enough that I’m looking forward to getting to know him better. Unfortunately, this story gave him little to do besides moan.

When the giant furry muppet is more engaging than the Doctor or either of his companions, you’ve got a problem.

There is one thing that almost makes this audio worth listening to, which I hope will be a framing device for the next several stories. Without the TARDIS, the Doctor and Charley have to push from one “zone” of this universe to the next via a nebulous “interzone,” presided over by a gatekeeper called the Kro’ka. Ably voiced by Stephen Perring (Matthias in Gallifrey, Sebastian Grayle in Seasons of Fear, etc), he’s witty, sly and intriguing. But he isn’t in enough of this audio to save it.

It was really Part IV that did this audio in, with the Doctor and C’rizz abandoning their rescue attempt and leaving Charley to suffer while they twiddled their thumbs in a danger-free hidey hole. After scene after scene of them sitting in the burrow waiting for the Doctor to think of a plan, I could tell the solution was going to turn up in the form of a magical plot contrivance that hadn’t been foreshadowed in any way for three-fourths of the story. Sure enough, The Oroog (who had already rescued C’rizz, which should’ve been the Doctor’s job) turned up halfway through Part 4 to tell them about a hitherto unknown helper-race and some magic herbs that will destroy the entire hive of ant overlords and cure Charley in an hour or so. The Oroog and his people take care of it. The Doctor’s role in the climax boiled down to little more than saying, “Make it so.”

Setting aside the impossible biology of Charley returning to her natural shape after losing her legs, this audio finds one more way to pad out the minutes by setting up a feeble bit of “will she ever recover?” suspense conveniently resolved with “yep” when the story is out of time.

Afterwards, Charley has no memory of her body horror ordeal, sparing future writers the need to address it in any meaningful way. That’s the biggest character reset button since classic Star Trek wiped Uhura’s mind and had her back to normal by the following episode.

The idea that all the Doctor and Charley’s adventures in the Divergent Universe are lab experiments by forces unknown is clever, but so far both stories have been somewhat exasperating.