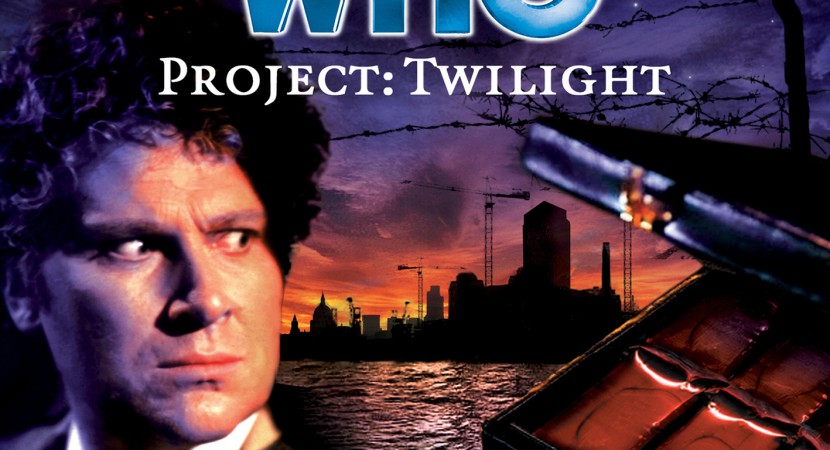 If Bloodtide was classic Who with Big Finish seasoning, Project: Twilight one drags Six into the murkier, more dangerous world of mature Big Finish. No-holds-barred horror leaves Evelyn reaching for her handkerchief to mop up both blood and tears.

Have a trailer. Spoiler warning at the end.

Vague review in case you’d rather avoid spoilers: The Doctor and Evelyn discover victims of a horrific government project that’s been left to fester for decades. He doesn’t have all the facts, and it’s hard for him to know which is the right side to help. Worse, it’s dredging up old nightmares for him, causing him to be unusually snappish with Evelyn because he is, frankly, terrified. This feels almost like a Fallible Five story in that he really, really is not on top of the situation, underneath Six’s swagger and air of authority.

Southeast London puts many UK listeners in familiar territory, adding that extra “Yeti in the Underground” immediacy with more believable and terrifying dangers. Well-written guest characters turn what could have been a conventional plot into a crisp and disturbing story where you fear some of them and fear for for others. There’s lots of strong but ambiguous performances, with everyone except Evelyn having something to hide.

This story introduces a couple new elements to the Whoniverse, including The Forge which will figure in quite a few Seventh Doctor audios. I have trouble with this genre, but it’s a good story, and I look forward with trepidation to the sequels. Be warned— Project: Twilight leaves a number of loose ends in its wake.

I spent the 90s with roleplayers who thought they were being sophisticated iconoclasts by replacing sword & sorcery with werewolves & vampires in urban dystopia, so I groan mentally whenever Big Finish dips into that particular stream. Also, I personally loathed the Great Vampires vs. Time Lords backstory introduced in State of Decay— behind all the grand imagery of bowships and whatnot, it was space vampires and Gallifreyan vampire hunters, and I just… no. It’s one thing to have the Doctor fighting campy monsters of the week on Earth, but it struck me as somehow more ludicrous to cross that older stratum of Who with the then-new portrait of advanced, standoffish, isolated Gallifrey.

In short, I dislike vampire stories even more than werewolf stories.

Yet Colin Baker’s moral agonising in this audio managed to make all that palatable. Almost. (I’m still not a big fan of Goth Opera.) I loved the fact that he was trying to be a 21st century hero and see the dirty grey area where nobody’s really a villain or hero, just people trying to survive. I love the fact that he put his own prejudices aside to try to help… but surprise, this time, it turns out he really is dealing with textbook villainy, and he’s just assisted evil. That’s a lot more convincing than just having a cardboard cutout Evil Because Evil Is Evil antagonist.

Poor Cassie’s not going to have much luck down the road, I have a feeling.

I’ve listened to one other story a long way down this plot arc; Black & White has a couple other characters from the Forge. I’ll be interested to see where that goes. I do really respect and appreciate Big Finish building up some new foundations like UNIT, like Ace’s training, like the Team Nerd dynamic, to flesh out classic Who and keep the creative juice going instead of simply preserving it in amber. I think that’s why Big Finish has lasted.

As a side note, the Doctor recites the Zagreus poem for the first time in Project: Twilight for no particular reason, in his very first scene in this audio. It will of course turn out to be a Chekov’s Gun.

This is the fifth Evelyn Smythe adventure, set between Bloodtide and The Sandman. Production Code 7C/E.

This is also the story that introduces The Forge, a loose continuity arc that pops up from time to time in the Main Range. Here’s the complete list of Forge audios.