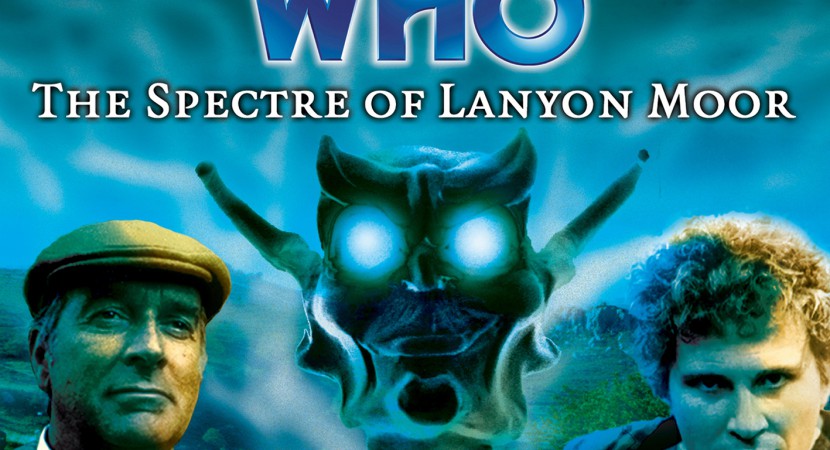 My chief quibble with Spectre of Lanyon Moor is that I now want an entire season of Six, Smythe and Lethbridge-Stewart. But this is all we have of that admirable trio, so we’d best enjoy it.

The audio gets off to a rocky start with a ludicrous troll-voiced “monster,” but from there it’s mostly uphill. Jumping ahead to the modern era, an archaeological dig at an Iron Age “fougou” has apparently stirred up ghoulies and ghosties on the moor. Evelyn soon discovers that the legends are more than moonshine. The Doctor, of course, has some nasty suspicions about what’s really going on and how to stop it before all hell breaks loose.

Despite some grisly scenes and a formulaic plot, this is an enjoyable audio, thanks almost entirely to Colin Baker, Maggie Stables and Nicholas Courtney.

“At my time of life, trouble should be confined to a spot of black fly on the nasturtiums. All the same, it’s nice to know we still make a good team, Doctor.” — The Brigadier

Nicholas Courtney slides back into character as easily as donning a favorite pair of slippers. He initially seems shoehorned in with as little rationale as Mawdryn Undead, but there’s a good reason for the Brig to be here. Evelyn and Alistair hit it off amiably, although there’s not enough time for them to work together. Instead, the Doctor and Brig fall back into their old partnership while Evelyn heads off to ferret out the B plot. All three face a harrowing test of courage, but the Brig rather steals the show.

I appreciate scripts that exploit companions’ areas of expertise, and this one does so very naturally. Not only does the Brig have his UNIT experience to draw upon (not to mention experience in managing the Doctor at his most aggravating), but also, Doctor Smythe has a rare chance to flex her scholarly muscles, scouring an old library for relevant facts at a speed that most researchers would envy, even in these days of computerised indices.

The guest characters are vintage Who caricatures, from the stuffy archaeologist butting heads with the Doctor to the local baron with something to hide to a tea lady who’s far more interesting than she would’ve been in a 70s-era UNIT story.

Most of the story plays out along the lines you’d expect for a 70s Who story with 80s pacing, but there’s a few clever twists to keep it from being entirely formulaic. Overall, it feels like a nostalgic nod to The Daemons, Stones of Blood, Battlefield, and the UNIT era in general. It gets bogged down in spots trying to juggle a few too many characters, and the Brig never gets to say “five rounds rapid,” but it’s that sort of a tale. I just wish there had been time for the Brig and Evelyn to compare notes on their exasperating friend.

MR#9 -The Spectre of Lanyon Moor

As I expected, Evelyn is a positive influence on the Sixth Doctor. I don’t think Peri or Mel would’ve made much headway if they’d lectured him about his bad behavior.

I really like the way the retired Brig has developed in post-classic Who, including the Sarah Jane Adventures. Back in the 70s, the Brig was often a source of frustration for the Doctor, hidebound and irritable and unimaginative, falling back on firepower to solve most problems.  Starting with Battlefield, Lethbridge-Stewart has shown a more relaxed side. He’s retired, he’s lived a good life, he’s more experienced than almost any human in dealing with aliens and the unexpected, and he’s picked up enough from the Doctor to improvise his way around some alien techonology or execute plans that don’t involve bullets.

Also? I love Evelyn’s handbag as a recurring plot device. Companions really should have handbags or towels or rucksacks, but apart from Tegan’s purse and Ace’s backpack of explosives, most have gone without. Instead, they’ve relied on the chaos of the Doctor’s pockets for props and oddments.

Big Finish says: “This story takes place between the television adventures, The Trial of a Time Lord and Time and the Rani, and after the Big Finish audio adventure The Marian Conspiracy.”

It’s the second Evelyn Smythe story; Production Code 7C/B. The next one after this is The Apocalypse Element with Romana. Evelyn certainly gets off to a galloping start, doesn’t she?

I’m positing Evelyn after the Doctor’s lonely wanderings post-Trial and after his Frobisher adventures.

P.S. For fans of Lethbridge-Stewart…

A new novel (Kindle or paperback) out in 2015, The Forgotten Son picks up after Web of Fear ends, reviving Colonel Lethbridge-Stewart as he was right at the beginning of his association with the Doctor. Classic Who seldom dealt with the aftermath of monster invasions terrorising downtown London. This does so, focusing on the humans left to pick up the pieces after the Doctor goes buzzing off.