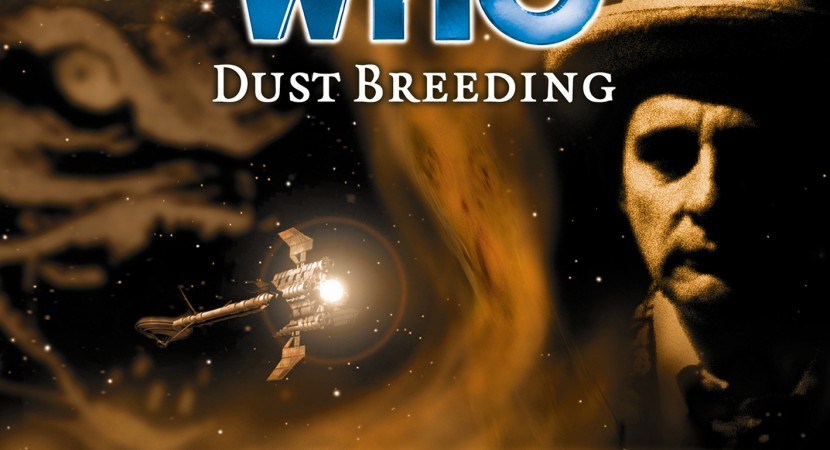 Where else would famous works of art from Earth wind up in the 26th century, than an intergalactic truck stop?

It seems Brax isn’t the only one with a collection acquired through questionable circumstances. The Doctor has been rescuing artistic masterpieces just before they’re lost, and this time he’s headed to a back-of-beyond refueling station and artists’ colony to pick up a print of Edvard Munch’s “The Scream.” Of course, it turns out there’s a spooky and scary reason for the emotion of that famous painting, and it’s nothing to do with Krakatau.

Here’s the trailer for Dust Breeding, but I warn you there’s a spoiler to the best thing in the story.

Checking in at the fuel depot, Seven and Ace reunite with Bev Tarrant, a good-hearted thief they met in The Genocide Machine.  Guthrie, a workingclass boffin posted on the fuel depot where Bev has been stranded, is a sympathetic nutter, while the head of the artist’s colony, Damien, is a more annoying nutter whose cardboard acting detracts from some pivotal moments in the story. The situation deteriorates with the arrival of a cruise ship for art snobs under the auspices of the ruthless Madame Salvadori (Caroline John, aka Liz Shaw, although you’d never know it’s her!) and her mysterious masked benefactor, the sinister Mr. Seta. I was a bit puzzled by the supposed “return” of the Krill, a dangerous enemy whom Ace has fought before, but it turns out they’ve made the jump from novels to audio.

“Somehow it has become reactivated, rrregenerated, waiting for its enemy to arrive.” — The Doctor

There’s some memorable, spooky images and moments of true horror, but despite the action and excitement, this feels like one of those old classic Who serials to watch on a lazy Saturday afternoon while working jigsaw puzzles (or is that too 80s for anyone to remember)? Ace has to shoulder a tedious amount of of companion screaming, and the Doctor winds up gurgling unintelligibly for a long scene as well.  Still, it’s worth a listen for the surprise twist and John’s hilarious camp, especially since it’s one of the discounted early Main Ranges.

I wonder what you thought of Mr. Seta and his backstory (Madame Salvadori pronounces it “theta,” ironically).

In reality, this drama was originally written for a different Master. But Ainley refused to work with Big Finish, partly because he asked for lots of money and creative control over the script/casting, partly because of a falling-out with Gary Russell over his review of Mark of the Rani [DW Master Magazine]. It was probably for the best. Geoffrey Beevers is a delicious voice actor, and his verbal sparring with Madame Salvadori is even more fun if you realise he and Caroline John were married.

I’m lukewarm on the backstory that the Beevers-Master is back because he burned through his Tremas-body and regressed back to his 12th regeneration How did a painting wipe out Tremas, when vaporisation in a volcano didn’t seem to affect him at all? Why is his twelfth regeneration still clinging to life, as badly deteriorated as that body is? I suppose I shouldn’t nitpick. Planet of Fire threw a spanner in the works long ago by making the Master immune to the same rules of regeneration which had previously bitten him.

I just feel like it would’ve been easier simply to have Beevers play the old, pre-Traken crispy!Master. But then I suppose he wouldn’t know the Seventh Doctor, wouldn’t know Ace, and would break the rule about Time Lords not crisscrossing each other’s timelines out of sequence.

I don’t know, but much as I appreciated Ainley’s camp, I think Beevers is really one of the best people to play the Master — he really understands the more sane, erudite and ruthless Delgado!Master and does his best to keep that version alive.

According to its production code (7T) and release order, it follows directly after The Genocide Machine and precedes Colditz.

I originally tagged Genocide Machine and Dust Breeding as mid Season 26  because both of them feature “space tourist” Ace, not Season 27 Ace acting as field agent and pawn for chessmaster!Seven. But it’s too confusing to pluck those two audios out of order. So we’ll just call them continuity-challenged and move on.