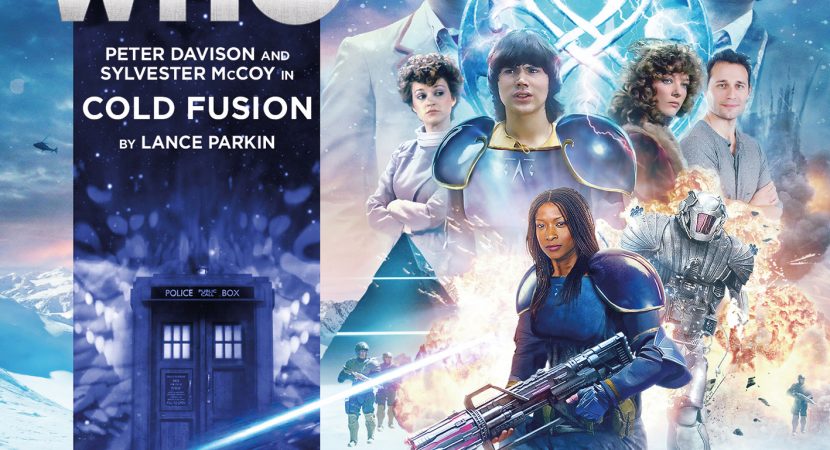 Big Finish’s much-anticipated adaptation of Cold Fusion is as fun, exciting, and ambitious as we’d hoped for, although there’s a few rough patches near the end. Its original author, Lance Parkin, wrote the audio script, and he’s pretty faithful to his own prose.

Cold Fusion brings together the Fifth Doctor’s crowded TARDIS team soon after his regeneration, and the Expanded Universe team of the Seventh Doctor, Roz Forrester and Chris Cwej. It’s a clever way to contrast and compare the compassionate Fifth Doctor, with his hands-on, fools-rush-in approach, and his machiavellian future self, who is more likely to pull strings behind the scenes and send out his companions as agents.

So, a quick synopsis of the starting scenario: On an ice planet held by the Earth Empire, science is the rule of law, and the Scientifica ruling elite don’t look favourably on ghost stories. Naturally, the Seventh Doctor thinks those ghost stories are worth investigating. Meanwhile he’s dispatched Chris and Roz on a covert mission to infiltrate the Scientifica. Unfortunately for Roz, Adric and the Fifth Doctor get in her way. Unfortunately for Tegan and Nyssa, they get in Chris’ way. Shenanigans ensue.

What makes Cold Fusion great is a deadly serious, universe-threatening drama involving the Doctor’s own backstory and the foundations of Gallifrey. I would suggest that if you haven’t yet read the novel, avoid the description on the Big Finish website. There’s a huge spoiler!

That plotline is a big reason why this novel is so hyped (or overhyped). It’s important, major-reveal stuff. But personally, what I loved most about this audio is the strong cast and the chance for different TARDIS eras to interact. All the TARDIS crews rise to the challenge and turns in some of their best performances (although someone needs to tell Matthew to take a page from Peter’s book and stop trying to pitch up to mimic his lost youth). There’s a memorable scene between the Seventh Doctor and Adric that tugs at the heartstrings. Chris and Nyssa make a surprisingly good team, and Adric and Roz work together for a while as well. However, the two Doctors keep spinning just outside each other’s orbits, encountering their opposite number’s companions but not each other. The story strings us along, teasing us about whether they’ll finally meet.

Seven: Now we know there’s been a mix-up. The other Doctor can return to the TARDIS and pop off somewhere else. Is he still trying to get Tegan back to Heathrow?
Adric: Er, yes.
Seven: Of course he is! Yes, well, find him and say the situation here is under control, not to worry, Heathrow’s just off junction four of the M4.

There’s one vital guest character whom I haven’t mentioned: Patience, given a charismatic and sensitive portrayal by Christine Kavanagh. Since it would be difficult to have a silent character in audio, she’s conscious for much more of the story in the Big Finish adaptation. That makes her a more interesting character, which is almost all to the good. Almost, because the script transfers a lot of Five’s lines and some of his actions to her, leaving him with less to do in a story that’s already spread the hero-duties around pretty widely.

I felt the interactions between the Fifth Doctor and Patience were perfect: understated but convincing. A friend of mine and an even bigger Davison fan than me felt that the chemistry between them was a little tepid in places. Go figure.

The FX and music are generally up to BF’s high standards, but I have to note a few minor sound issues. For one, both I and my Five fan posse (three of us meet in a chatroom for listening parties) sometimes had difficulty telling Roz’s voice and Whitfield’s apart. I’d assume it’s our accent-deaf American ears, except that we’ve all listened to over a hundred BFs without this problem. Also, we sometimes got confused among the legions of minor characters voiced by the same 3-4 actors trying to disguise their voices with different accents (The Americans, as usual, hurt my ears, but the warmonger stereotype is hard to dispute, alas). And speaking of hurting your ears, my friends with headphones complained about a painful shrieking static noise around 2:29:25, when a ship in orbit fires its guns. It’s 4-5 seconds of ouch, so you might want to turn the sound down.

There’s so many plots flying around that the action becomes a little hard to follow in ep 5 and 6. It’s not a fatal problem, and for me it was simply a good excuse to re-listen and sort out what I missed the first time around. But my friends had the same issue. I’ve enjoyed about a half dozen re-listens in a month (!), but I would not recommend Cold Fusion to someone new to Big Finish. Save it for later.

I love this audio, having read the novel so long ago I’d forgotten most of it. Five fan #2 enjoyed it very much as well, having not read the novel before. And Five fan #3 enjoyed it but was slightly disappointed, because she loved the book and had very high expectations.

Final verdict: I think Big Finish did Cold Fusion justice. It’s something special, even if it isn’t perfect.

I was actually dreading this audio, because of some reservations I had with the book. (Blasphemy!) Multiple scenes with males leering at female characters repelled me, Patience spent far too much of the story in passive damsel-in-distress mode with minimal personality, and, to cap it all off, I’m really not a fan of Lungbarrow, looms, EU Machiavellian Seven or the Cartmel Masterplan. For me, he was the funny little man with the umbrella, a breath of fresh air after a grimdark period of Doctor Who that didn’t work for my young teenaged self. I’ve grown more accustomed to sinister Seven now, but the rest needed to be addressed for me to be able to enjoy the audio. And, to my relief, they were, or at least the bits that bugged me were toned down.

Gone were (most) of the skeevy scenes contriving to get Nyssa, Tegan and Patience undressed or wearing as little as possible. Having Nyssa oblivious to 90% of Chris’ flirting made their scenes far more amusing and less “Nyssa, quick! Hit him with a poker and run!” With that aspect toned down, I was able to enjoy the way Chris and Nyssa team up style to Get Stuff Done.

Patience has been fleshed out into a real character with a voice and personality, a worthy partner for a hero some of us have known for decades. The chemistry between her and the Doctor was exactly the sort of understated but fond connection I’d expect, and Kavanagh has such an appealing stage presence, like a more laid-back Jemma Redgrave, that I forgive her for stealing so many of the Doctor’s lines.

It felt like the Other mythos was scaled back slightly, with looms only mentioned in an incoherent dream sequence to which Patience says, “These accounts contradict one another.” Yes. Yes, they do. Thanks for acknowledging it. (On the other hand, I loved all the callbacks to every single classic Doctor before Five, even a Five Doctors quote which come to think of it postdates this story in the Doctor’s timeline.)

Seven is appallingly callous at the beginning of this story, even by Cartmel standards. He promises to give his informant protection, only to leave him to be murdered by Adjudicators. Whereas Five is, for the most part, the bleeding heart(s) of the two of them. That said, I had to laugh at Five saying, “Adric! You’ll be killed!” [if you stay behind] only to forget he’d left Adric behind to die for most of the story. You’d think that bit had been written by Peter Davison.

I wish there had been a little more closure for Patience’s arc. There was so much to wrap up, but everyone seems to forgets she existed, and may have just been shot through the head. Medford never apologises, and Tegan never asks where she went. Thankfully, the audio leaves it more ambiguous whether she really did die. The audio script adds the “love endures” line, offering Five a little more closure over her loss (alas, poor Fridge Damsel). But she seemed to be so central to the story and then suddenly…she isn’t?

Other minor comments in no particular order:

Phew. I could say so much more about Cold Fusion, but I think I’ll stop there.