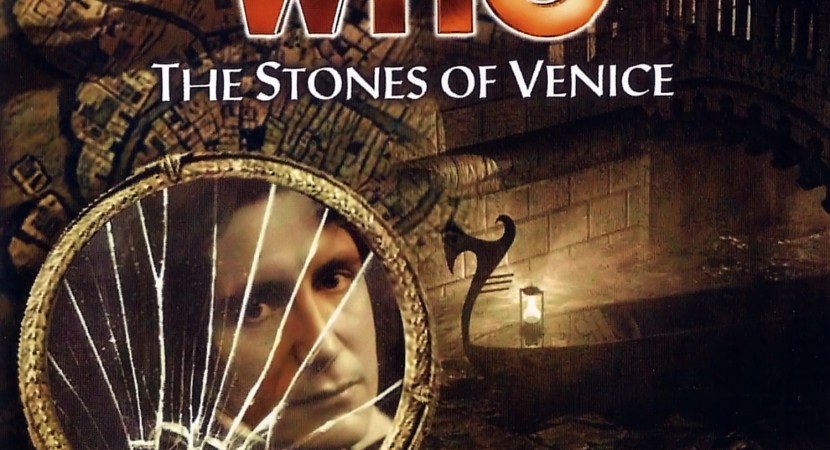 Charley’s third jaunt with the Doctor takes them to the death-throes of decaying Venice, which seems poised to pull an Atlantis in the 23rd century.

The Stones of Venice possesses hints of Masque of Mandragora, minus the Renaissance rationalism: a corrupt duke, a mysterious cult in the catacombs, madness, prophecy and a sense that everything’s about to come crashing down (quite literally). A lover’s tiff between the Duke and his estranged wife Estella has placed a curse on the entire city. The cultists have made a saint of Estella, while an ignored underclass of gondoliers is only too eager to see Venice collapse into the swamp.

So here is where the Doctor takes Charley for an ostensibly relaxing vacation, to a party on the eve of armageddon. India Fisher gets to flex her acting chops and carries her part off superbly, while Paul McGann is settling into his role as the curious, flighty, talkative innocent of the Eighth Doctor’s early days.

“I’ve decided to enjoy myself. All right, so you’ve brought me somewhere on the brink of calamity, as usual, and we’ll be lucky to get out by the skin of our teeth, but it’s still beautiful. It’s still…”
“It’s still Venice! It’s somewhere fantastic, dreamlike at its doomed apotheosis.” — Charley and the Doctor

The guest characters are a mixed bag. The corrupt Duke is more complicated than he seems at first (thank goodness), a charismatic performance by Michael Sheard (Mergrave in Castrovalva, numerous other classic Who roles). His beleaguered curator Churchwell reminds me of a more restrained version of Mr. Fibuli from The Pirate Planet, a similarly sympathetic long-suffering lackey. The head of the cult is a one-dimensional villain, “true to type” as Charley says. Unfortunately, the actress playing the pivotal role of Miss Lavish tends to drag down dramatic moments with her leaden performance. Fortunately, Barnaby Edwards is as yet another suave, slightly sinister chap with a generic foreign accent.

There are some good ideas in this audio: the overlooked gondoliers, revelers caught up in the excesses of one last Carnivale, the legend of Estella, the curse, mourning for doomed art and a doomed city, and a group of cultists whose leader has the same sense of self-importance as Hieronymous in Mandragora. There’s a dreamlike, grand, horrific quality to the audio, reminding me a little of the masquerade in Labyrinth, if you remember that far back. As often in Big Finish, secondary female characters have a stronger role than they usually did in classic or even nuWho.

At the same time, I’m starting to tire of longwinded speeches and epilogue moralising. Also, on repeat listens, I’ve noticed that several characters keep vacillating: they insist on certain things very firmly, then they change their minds for no apparent reason, then they change them again. For example, Miss Lavish is disgusted by and mocking the revels one moment, presiding over them and encouraging them the next.

Trivia note: this script and Holy Terror were offered to Tom Baker first, probably hoping he’d take to it like City of Death.

There’s an eerie air of anachronism in Stones of Venice. It’s the 23rd century, yet it feels like a corrupt and dilapidated version of Renaissance Venice, with a Doge (or rather, a Duke) ruling as an autocrat. What happened to the Republic of Venice, or to Italy? Locals scoff at the Doctor’s suggestion that some paintings are not from Earth, even though this is well after the Dalek invasion of Earth and human contact with the Ice Warriors in Red Dawn. Why doesn’t anyone on Earth care that famous surrealist art by Magritte and Dali is about to be destroyed?

I’m also a bit bewildered by Pietro’s insistence that Venice will be “[theirs] again” once it’s sunk. The gondoliers are an amphibious life form that’s evolved… when, exactly? Are they supposed to predate the foundation of Venice? Or are they the result of some kind of genetic engineering, since evolution doesn’t happen across a few centuries?  When was Venice “theirs” before?

The audio ends with the Doctor declaring Charley his “best friend.” This will tie into the following train wreck, Minuet in Hell. It feels a little premature to me this early in their run, although they will certainly become as close as any Doctor/companion team. I suppose, even for the Doctor, Eight is especially impulsive and liable to blurt things out.

It’s the third audio with Charley and Eight, production code 8D, between The Sword of Orion and Minuet in Hell.