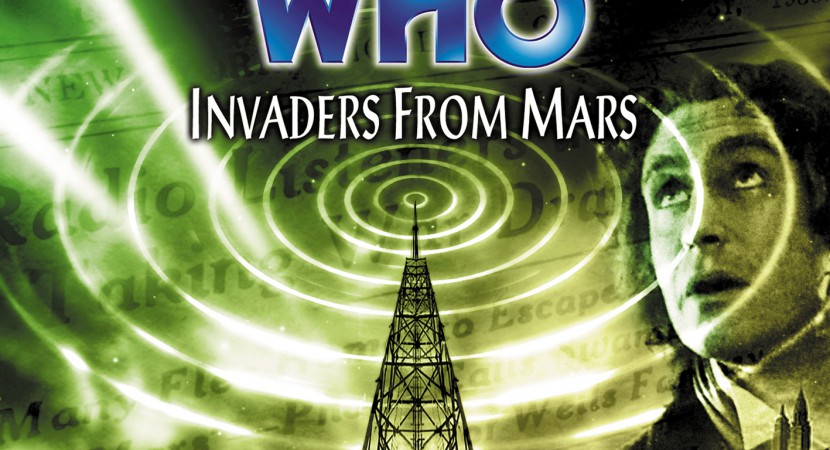 It’s a fabulous idea: during Orson Welles’ War of the Worlds broadcast, there really was some sort of alien invasion taking place.

Unfortunately, I couldn’t properly enjoy the executuion. It didn’t help that Invaders From Mars comes right after The One Doctor, which had me laughing throughout. This is another parody, except it takes itself too seriously at times, and it’s such a jumble of genres (mobsters and private detectives, 1950s UFO monsters, Welles’ other radio success The Shadow, spies and defectors and Nazis and Russians and CIA and a standard Hollywood Evil Homosexual) that it feels like a Whovian reboot of Mars Attacks. That was another good concept marred by too many ingredients in the stew.

En route to Singapore, Eight and Charley find themselves in New York City, and start tripping over clichés before they’ve taken three steps. They also trip over a private detective’s deep-fried corpse. The Doctor, who’s shaken off the angst of the past three incarnations and seems determined to play wide-eyed innocent, impulsively takes up the corpse’s last case. Charley doesn’t have long to play the voice of reason before she’s kidnapped and pretty well out of the story. Instead, the Doctor winds up working with the dead detective’s client, a woman with the improbable name of Glory Bee. Sorry, Charley! Searching for Glory Bee’s uncle, they find the mafia’s fingerprints are all over everything, including alien rayguns. Meanwhile, oblivious to the chaos taking place outside — not all caused by his broadcast — Orson Welles continues to narrate H.G. Wells’ story of Martians and mayhem.

“So, Miss B, what’s the rumpus? Are you cracking foxy with me, or is your uncle in trouble with the bricks? Are they going to drag you down to the hole because some guy gets shot through the pump with a heater?”
“Are you all right?”
“Local patter, Charley.”

After the opening sequence, Charley is so underused she might as well not be in the story. The Doctor is in his element, but he’s surrounded by painfully fake American accents which always sound worse juxtapoised against RP. And I have a special bone to pick with this cast. While I normally have no trouble following audios that other fans have called complicated, I’ve listened to Invaders twice and still can’t keep track of all the characters and why they’re there. (Looking at the cast list, I can see why: nearly everyone’s pulling double or tripe duty. What with all the hoaxes and double crossing in this audio, I kept thinking Carla was Glory Bee incognito.) The problem disappears once the roll call is pruned, but one of the deaths felt so contrived and pointless that I kept expecting a “surprise, I’m not dead” scene.

I did enjoy the final twist with Orson Welles, although it felt rather rushed. It’s usually only in new Who that the Doctor barges in and everyone listens to him and starts following his orders. And he didn’t even have to wave a psychic paper around.

All the rest would’ve just made me think it’s a bit of a mess, not the best of Big Finish but not execrable. What sank it for me was the textbook TVTropes Sissy Villain stereotype. First queer character in Who TV or audio, not counting Karra, and it’s this? I suppose a gay author has carte blanche to write all the lisping evil gays he likes, but in my opinion the last person who pulled it off and made it funny was Graham Chapman (around 6:00):

I hope Big Finish’s next gay character is a little less tiresome.

And there’s one problem which I’ll mention in the spoiler section after the break.

I think this is the first three-parter in the Main Range, which should’ve solved a problem they keep running into: it’s easier to structure a drama in three acts than four. The odd thing is, Invaders From Mars  seems to run out of material early and has to manufacture a crisis to pad out the ending. It seems like the story is going to be a series of hoaxes, impersonations and rackets culminating in the Doctor and Welles working together to hoax the real aliens into believing another alien invasion is taking place. So far so good. But in fact, that’s not what happens. The Doctor fails. The aliens are defeated by the Russian scientist setting off his homemade bomb.

Other than figuring out the aliens have their own protection racket going on— which Cosmo Devine might well have recognised on his own— I can’t see that the Doctor influenced much at all. Events play out around him. Charley is drugged or passive or absent. (And I can’t help noticing that the only other female character with any significant role was randomly binned before events really came to a head.)

There have been plenty of stories where the Doctor fails and a guest character (or even a companion) winds up sacrificing themselves in his stead. But the tacked-on ending made the Doctor’s actions seem particularly irrelevant.

It’s the first audio of the Eighth Doctor’s unofficial season 2, set between Minuet in Hell and The Chimes of Midnight.  Production Code 8F.