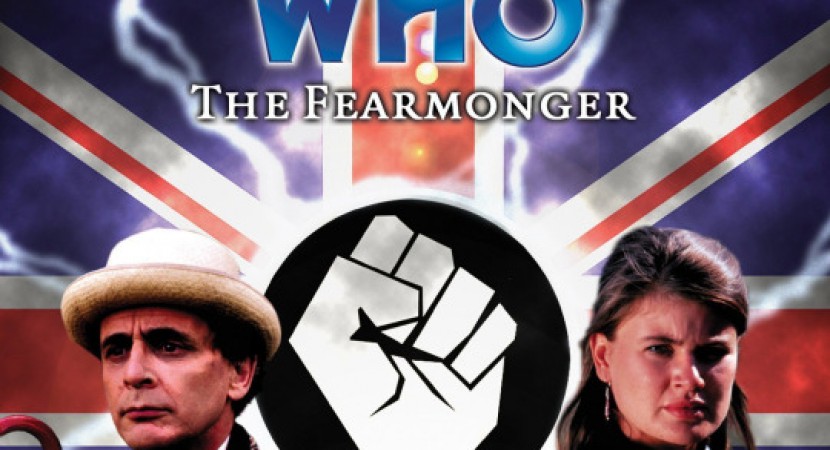 “There’s nothing to fear but fear itself” is a  platitude with teeth in The Fearmonger, the first audio that feels to me like confident Big Finish Doctor Who.

The story is tight and timely. Charismatic Jacqueline Pearce (Servalan of Blake’s 7) plays a political candidate whose New Britannia party sounds suspiciously UKIP, despite this audio dating to February 2000. She’s opposed by liberal protestors driven to such desperate measures that there’s not much to choose between factions. Each side  points fingers at the other, a point emphasised in the opening and closing lines of the audio. Each side cultivates fear.  There is a monster here, but before the last cliffhanger, you’ll start wondering who the real monster is.

It’s darker than the classic show, exploiting the episodic style of storytelling with cliffhangers, then adding psychological depth and better plotting. It’s also the first Seventh Doctor and Ace drama since Survival‘s “we’ve got work to do” coda, solidifying the premise that the Doctor’s been training Ace to fight monsters.

Sophie anchors the drama with her convincing portrayal of a slightly more mature Ace acting as the Doctor’s field agent, taking the initiative, serving as intermediary between him and humans, and  sassing those who most deserve her verbal knuckle sandwiches. Sylvester feels a little rusty, but he has his moments as the new Chessmaster edition of the Doctor, with brief flashes of vulnerability and sympathy as well as a new-found edge as the Doctor who may not be a “good man.” That point has been hammered home ad nauseam by the new series, but it arose on Big Finish five years earlier.

“In fact, I do believe the one thing I’m really afraid of has just happened. So honestly, what can you do for an encore?” — The Doctor

In short: a strong story, worth a second listen after you know what’s going on. I’m only sorry I didn’t hear this as the first of the BF Seven and Ace audios, since it gets them off on the right foot.

The first time I listened to this audio, I was annoyed at the underutilisation of talented Jackie Pearce. However, that’s the point: she’s so charismatic that it’s easy to assume she’s the real villain. She’s an unscrupulous politician who’s exploiting and exacerbating undercurrents of racism, classism, paranoia, insularism, and so on, but those things didn’t come from her, and blaming Hitler or a lesser rabblerouser doesn’t absolve society of guilt.

In the same, the alien Fearmonger in this story isn’t creating those things; it’s just feeding on them. This is yet another Pogo parable: “We have met the enemy, and he is us.”

Pontificating aside, I thought this audio took advantage of the episodic format of classic Who better than most. Sometimes Who writers fail to convert a three-act structure into four, struggling to contrive artificial cliffhangers that are resolved within a few minutes of the next episode so that they can get back to the real story. This one? Every episode is a coherent chapter building to a climax that sets in motion the following episode. The cliffhanger with the gunshot was almost too much for me, but that was powerful, something classic Who probably wouldn’t have dared. I loved Ace using the Doctor’s negotiation techniques and then failing. That whole scene was powerful.

And the twist with the Doctor seeming to have become infected in Part IV? I fell for it. I was rooting for Ace to save the Doctor. I honestly wasn’t sure where the monster was, right until the end. Hat tip! I’m usually far, far ahead of the characters’ deductions, getting impatient with their failure to connect two plus two.

Finally, Ace’s whole “and your show eats weasel dung” call into the talk show had me pounding the steering wheel and hooting.

Production Code: 7R, which numbers it as the next serial after Survival.

I’m not sure if Ace is actually meant to have received Spacefleet military training by this point, but she’s certainly acting as the Doctor’s deputy and field agent in a way that she wasn’t on TV. I put this as the start of “Season 27b,” with the Seventh Doctor Lost Stories as Season 27a.

The tricky part is that the two Main Range audios after this, The Genocide Machine and Dust Breeding, show Ace as she was back in Season 26, before she was a “veteran” in quite the way she is here. I think it took Big Finish a while to sort out a consistent characterisation for Ace.