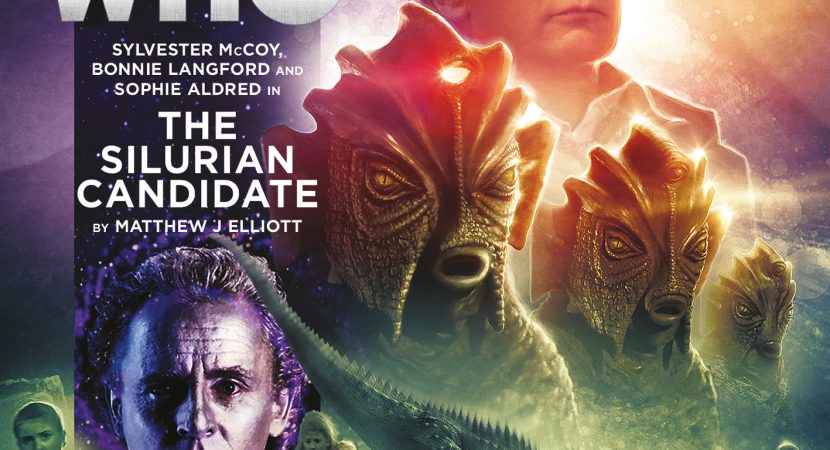 This well-put-together story revisits the thorny question of two different races each with claim to the same patch of ground, an SF trope with very real-world applicability.

I’ve listened to The Silurian Candidate several times now, partly because I fell behind in my Big Finish listening queue while prepping for the fall con season. So I kept needing to go back and re-listen. Also, this was a difficult audio to rate.

At times it strives to be epic in scope, with dramatic action and world-changing problems and knotty ethical questions. At other times it digs down to character drama and interpersonal conflict between friends. Both make for some pretty fine storytelling. My main beef was that an awful lot of the tension is sustained by lack of communication. Maddening as the Doctor can be, I didn’t understand why he wouldn’t explain what he was up to. Then again, this is Seven.

Doctor: I get the impression you and Mel aren’t keen on my making this quick stop.
Ace: Only because your ‘quick stops’ tend to involve some all-powerful Time Lord weapon you left on Earth by accident, like the Foot of Omega or something.

Also, I was gritting my teeth at some hamfisted feminist-as-written-by-a-dude (think Ruth in The Time Monster) early on, and later there was some cringeworthy “the moon is an egg” science for anyone who knows the basic sequence of Earth’s geological record/fossil history. But that’s Doctor Who all over. Anyway, the Silurian backstory was a mess long before Big Finish tried to tidy it up.

Ratings are subjective, so forget them and let me give you a spoiler-free overview so you can decide for yourself.

We’ve finally pinned down when these Ace & Mel audios take place. Maybe. As Sophie notes in the interviews, Ace’s wariness about the Doctor suggests it’s not long after The Curse of Fenric. A great thread running through The Silurian Candidate is Ace trying to warn Mel about this newer, darker Seven who might not be quite the Doctor Mel remembers. The relationship between Ace and Mel is so much richer now that Big Finish is giving them a second chance to get to know one another. As usual, Mel is given a lot more to do, think, and say in audio, while Ace is also a little more three-dimensional and independent than she was even in Season 26.

The A plot weaves together several loose ends from classic Third, Fourth, and Fifth Doctor stories, particularly Warriors of the Deep. After all, some of the Sea Base 4 personnel survived that incident and lived to tell the tale. What, if anything, resulted from their reports? And how did that play into the Cold War tensions of the time, when the human race was once again caught between two great superpowers on the brink of nuclear war? For that matter, did any news of that incident get back to the Silurians?

This story brings Cold War politics up to date, including the toupée-wearing narcissist who’s president (chairman) of one of the blocs. There’s some sly commentary on politics and media manipulation of the public. Toss in some Fritz Lang androids (why not?), extrapolations on where tech is headed, larger-than-life guest characters, a Manchurian Candidate twist, and difficult ethical dilemmas for both Mel and Ace, and this is quite a yarn.

Trivia note: Absolom Daak, whom the Doctor is singing about in the opening scene, is one of his companions (sort of) in recent comics.

I did very much appreciate the red herring set up by Falco’s comments that Shen seems almost inhuman. Her cool manner, comment about humans being unreliable, and choice to return to her ship after landing (to communicate with her masters?) hinted that she might be the Silurian puppet. Also, the dissection plot with Mel left dangling the juicy idea that she might also have been brainwashed and didn’t know it.

I’m not entirely sure I buy the Doctor’s solution— he’s putting an awful lot of faith in future humans and Silurians, that they’ll be able to work out their differences without killing one another, and it seems like a huge ask for the Silurians to submit to the plan (or for that matter, to tell Shen about the Silurians and then just… expect her to trust them to go to sleep.) However, his conversation with Ace and Ruth at the end of the story reminds us that despite his hinting to Ace in every damn way that he didn’t trust humans and wouldn’t trust her with his plans, he has a lot of faith in the future, and in people, to “find a better way.”

A way he couldn’t find, to his horror and shame, at the end of Warriors of the Deep. Or, for that matter, Doctor Who and the Silurians. It took him several lifetimes to come up with one, and it still nearly failed.