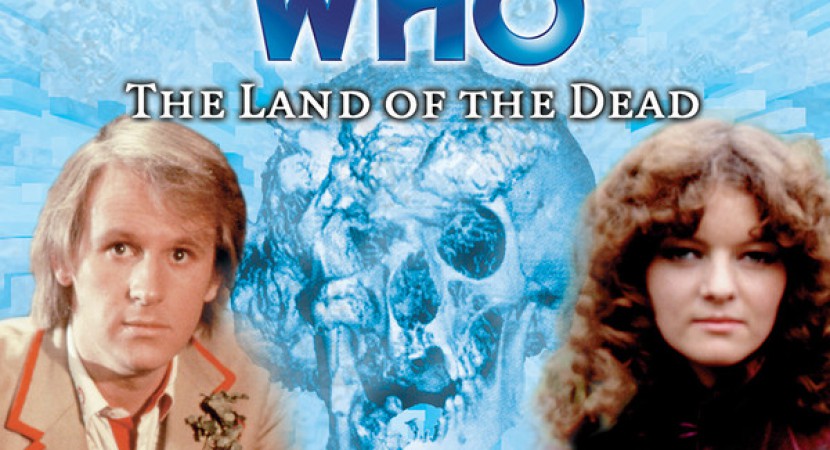 Oy, Nyssa, remember how you slept through Kinda? Here’s your chance to find out what you missed! Only this time, the Garden of Eden has been replaced by the snowy wastes of Alaska, the natives are modern-day Koyukons trying to reconcile native traditions with westerners paying handsomely for cultural appropriation, and the snakes are zombie dragons.

Okay, so it’s not that similar a story, but if you know Kinda, it’s like a watered-down version, minus the psychedelic dream sequences. Sadly, it lacks Kinda’s edge, because the actors playing obsessed millionaire Brett and his much-put-upon rival Tulung are less compelling than those playing Hindle and Aris.  The “voice of sanity” stand-in for Dr. Todd, Monica Lewis, is better, except that she’s so obviously a Tegan clone.

NOTE: If you own this CD, do yourself a favor and replace its icon/cover art with one of these fan custom covers.

Mediocre as it is, there’s interesting ideas in The Land of the Dead. The setting is evocative: a rich man’s folly, half mansion, half mausoleum, built in the middle of nowhere. Local Alaskan mythology adds authentic-sounding texture as well as wonder and spookiness. The monsters are genuinely scary and disturbing, the sort of thing that works well in a radio play because imagination is always more powerful than FX. The science is utter bollocks, but it’s really no worse than a lot of pseudoscience in classic Who (think Stones of Blood).

“My people blended the spiritual and the rational, Tulung. I know how difficult it can be to carry tradition with you. But you have to learn when to let the one lead the other.” — Nyssa

I did like the unhealthy rivalry between Brett and Tulung, two young men growing up in the shadows of their fathers, each convinced their father died a hero and the other a coward. There’s also a conventional “native spirituality vs. modernity and science” debate, embodied in Tulong, a half-Koyukon, half-American, and in the stereotypical native Gaborik.

The Fifth Doctor is polite, witty and courageous. As a Nyssa fan, I’m delighted at how much more she’s given to do in audio, guiding Tulong and heading off on her own to do SCIENCE. This is really where Team Nerd (as I call them) starts, the Doctor and Nyssa as a brainy partnership.

In sum, it’s not the first Big Finish you should listen to, but it’s probably worth the cheap download price. I’m surprised to find myself reaching for it again when I need to listen to something less angstful than recent Fifth Doctor audios.

I should warn you up front that I’m a Nyssa fan, so I’m going to be biased towards any audio that gives her more to do. And boy, does she get more to do.

In classic Who, she was a bioelectronics expert — whatever that means — from an advanced civilization that could rearrange atomic structure with a handheld ion bonder the way we might whip out duct tape or a glue gun. She was obviously a MacGyver, quickly saving the Doctor’s life by shorting out androids with the sonic screwdriver and a mechanical pencil, or building a desktop-sized sonic device to shake apart another android. And we see her doing enzyme analysis in her underwear, so apparently the biology side of her expertise included biochemistry.

Big Finish begins to broaden and expand Nyssa’s abilities right from the start. Granted, a lot of the science quackery in Land of the Dead is about skeletons animated by some sort of energy— bioelectronics without the machine component— but the Doctor sends Nyssa off with an assignment (just as in The Visitation), to carbon-date some bones for him.

I can’t think of many robotics engineers or lab scientists on our planet that would know how to do that with primitive alien technology.

Also, Land of the Dead has Nyssa being keyed in the spiritual and the rational. This will blossom into “psychically sensitive” by the next episode.

I love her, but I can’t help noticing her augmented abilities in audio.

I think of the Five and Nyssa audios as “Season 19b,” a continuous sequence of adventures between Time-Flight (end of Season 19) and Arc of Infinity (beginning of Season 20).

This is the first of the Nyssa and Five audios, production code: 6C/A. The next one released was Winter for the Adept.