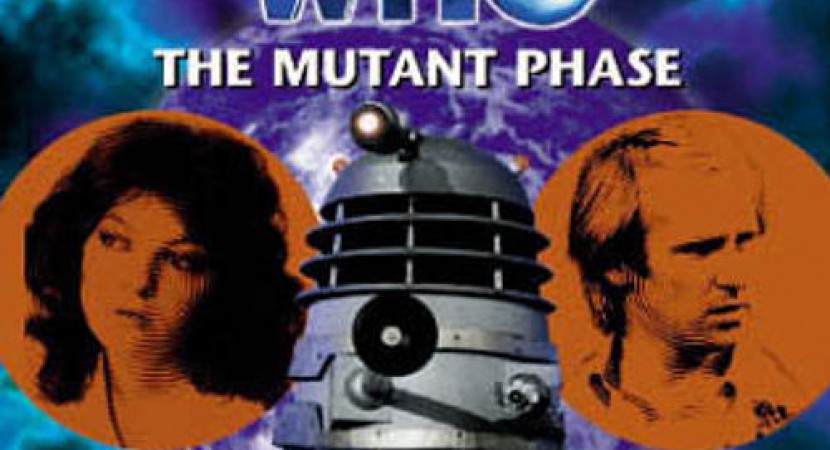 Freebie alert! There’s an abridged version of The Mutant Phase on Soundcloud. Pros: It’s cut out 40 minutes, which corrects the original audio’s problem of long lulls punctuated by bursts of action. Cons: Some of those lulls were meaningful Doctor and Nyssa conversations, which happen to be my favourite part of this story. I prefer to splurge a whopping $3 for the original.

(And if you own it, have this excellent custom cover from Colin Brockhurst.)

Mutant Phase is the next so-called “Dalek Empire” installment after The Genocide Machine and The Apocalypse Element. They’re stand-alone stories, although I gather they tie in somehow to the Dalek Empire spin-off series.  This one is the Fifth Doctor’s first audio confrontation with the Daleks and Nyssa’s first glimpse of them. It poses the question: what could possibly be so awful that even Daleks fear it?  The answer is found in a skin-crawling horror/monster story all wrapped up in a big bow of timey-wimey paradox, years before the latter became a new Who staple.

Appropriately enough for “Team Nerd,” the Doctor’s quick thinking and Nyssa’s methodical intelligence succeed where Dalek weapons fail. They prove what Peter Davison argued back in the eighties: Nyssa’s scientific expertise and compassion make her an ideal companion for his Doctor. She’s smart enough to decipher his technobabble smokescreens, and he respects her enough to answer when she challenges his BS.

“There’s no need to panic, Doctor. I was just fixing the audio circuits on the proximity alarm.”
“The wha— oh. Were you? Why?”
“So that next time the TARDIS is hovering above Alaska, we might get a bit more warning if there’s an ancient flying machine about to bump into us.”
“Ah. Yes. Point taken. Well done, Nyssa.”

While Peter and Sarah have found their stride, the guest characters are a little flat-footed. Commander Ganatus (cute call-back) and Professor Ptolem are mildly intriguing, with hidden motivations and lingering questions about how far they can be trusted. But the trio of nihilistic humans are oddly forgettable, especially considering they may be the last survivors of the human race. Their malaiase adds a running-through-quicksand quality to the Doctor and Nyssa’s flight, which is both nightmarish and dreary. The excitement ratchets up once the Daleks arrive. I particularly love the booming, ominously jovial Dalek Emperor revived from the black & white era of Doctor Who.

It’s not top-notch Big Finish, but this audio has grown on me. I don’t know whether it’s “Stockbridge Syndrome,” as Evelyn’s charming malaprop put it, or whether I’m burnt out on more recent Big Finish audios where depressing failures and traumatic loss make every Five and Nyssa story a downer. I think I’m relieved to return to an old-fashioned classic Who story powered by plot not angst, even if it does retain some of the plodding feel of seventies Doctor Who.

After a promising start in Land of the Dead and a train wreck in Winter for the Adept, Team Nerd solidifies into a dynamic that will carry across most of the Five & Nyssa audios. Sometimes they’re brainstorming to overcome obstacles, researching mysteries and whipping up technological solutions like a couple of MacGyvers. Other times they clash over difficult issues that were never properly addressed in the classic series. This audio touches on some of those recurring themes for the first time: Adric’s death, the laws of time which will turn out to have drastic repercussions for Nyssa down the road, and why the Doctor can’t reveal some things even to companions he trusts a great deal.

Sarah Sutton owes Nicholas Briggs a big debt of thanks for establishing the Team Nerd blueprint, drawing on fleeting hints from the TV series.

I love the fact that Nyssa figures out at least half the mysteries in this story, that her biochem expertise is put to good use, and that it’s her bright idea that lets the Doctor break out of the Daleks’ time corridor. It’s a great palate-cleanser after Andrew Cartmel’s mischaracterisation of whingeing, heel-dragging Nyssa in Winter for the Adept. Also, while it draws attention to the story’s Achilles heel, I love Nyssa telling the Doctor that his explanation for the paradox doesn’t make sense.

Despite my complaints about sluggish pacing, my favorite part of this story is the interlude with the TARDIS hovering in the vortex while the Doctor plots their next move with Nyssa’s input. It reminds me of Logopolis, when Adric and Nyssa witnessed entropy eating the universe from the lifeboat of the TARDIS. Except the Doctor and Nyssa are not helpless observers. It’s on his shoulders to concoct a miracle, leap back into the maelstrom and reverse the wave of destruction.

The third Nyssa and Fifth Doctor audio, unofficial “Season 19b,” taking place in the gap between Time Flight and Arc of Infinity.

Follows Winter for the Adept. Production Code 6C/C. The next Nyssa story after this, Primeval, is excellent.