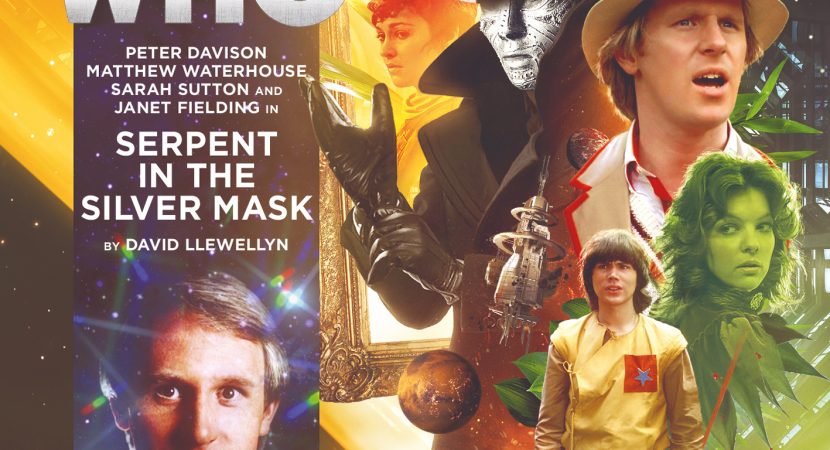 It’s time for Season 19’s crew to have a One Doctor/Bang-Bang-a-Boom comedy. This one doesn’t steer quite as far into the parody zone, but it’s a comic murder mystery borrowing elements from Sherlock Holmes, Agatha Christie, Scooby Doo, and an old Sir Alec Guinness film called Kind Hearts and Coronets.

Whoops, wrong trailer. Here’s the trailer for Serpent in the Silver Mask.

Transpose Kind Hearts and Coronets to a luxury space station, plaster it with effusive advertisements, toss in a hardbitten (and possibly fleabitten?) police inspector,  stir in a dollop of Doctor Who style technobabble and robots and timey wimey, and you’ve got the gist.

Actor Samuel West is the Sir Alec Guinness of this story, playing every member of the Mazzini clan trying to get their hands on the family fortune. It takes a little while to figure out who’s who, but he varies their voices and mannerisms enough that one soon sorts out the family tree. His stint as Maria Mazzini makes for a memorable near-panto scene with the Doctor.

Adric and Nyssa have a double Velma act, investigating and poking about on the Doctor’s behalf. Nyssa puts her scientific knowledge to good use but seems to have gotten up on the wrong side of the TARDIS, with her snobbery dialed up several notches and her tact on mute. Adric has fun being the Boy Who Snoops, a role that suits his reformed-juvenile-delinquent status nicely.

Tegan’s characterisation is absolutely spot-on, and she even gets a well-written romantic plotline (not usually one of Big Finish’s strengths). Her budding relationship with one of the Mazzinis gives her a very personal stake in finding out who’s bumping off his relations.

The Doctor is sidelined for part of this story. There’s a lovely scene with him locked up in a cell (surprise, surprise), confiding his insecurities to a guardbot. But the Fifth Doctor is in his element, too, dashing about, playing Sherlock Holmes and showing up for nick-of-time interventions.

Speaking of Holmes, the mystery has a clever enough twist that even if you guess who the murderer is, you probably won’t guess how.

All in all, this story veers between well-worn tropes and subverted clichés, camp, entertaining dialogue, and futuristic SF and Doctor Who gimmicks to take it in directions Agatha Christie couldn’t possibly have imagined. There’s just one great whopping plot hole I won’t spoil…. here.

MR#236- Serpent in The Silver Mask

Minor nitpick: Why is Tegan jumping on the Doctor for calling a robot “he” when she called it “Mr. Robot” a minute before?

Also, to my surprise, I had a hard time believing Tegan would turn down Joe Mazzini’s invitation. I’m generally opposed to the “companions falling in love and staying behind” trope, because it’s so often a contrived excuse for getting rid of female characters (see: Leela). But Tegan and Joe really did have convincing chemistry, and it was a heck of an offer. More importantly, I’m not sure Season 19 Tegan believed the crew “needed her” as much as all that— it hasn’t been that long since she stopped nagging the Doctor to get her back to Heathrow.

But then, Big Finish is usually constrained by the fact that it’s jamming new stories into existing continuity, so love interests have to be disposed of by the end of a story. Maybe it’s better for the companion to part ways on amiable terms rather than have it forced on them by death or betrayal.

So, about that plot hole. Perhaps I’m missing something myself, but for what it’s worth…

This whole story hinges on the murderer shooting his past self, then fending off the resultant paradox because the space station is in temporal lockdown. Even if you buy the idea that the normal laws of time can be suspended in a pocket dimension, there’s still a significant lag between the shooting and temporal lockdown. Superintendent Galgo showed up after the murder, examined the crime scene, interrogated the Doctor and Adric, and then set up the temporal lockdown. Maybe there’s a delayed response? But the paradox corrects itself almost instantly at the end of the story, as soon as the station’s timeline is reconnected to the universe. So why didn’t the paradox— and those bullets— catch up with the perpetrator during the 5-10 minutes between the shooting and temporal lockdown?

More seriously, Angelo Mazzini changed history not just for himself but also for his uncle, sister and nephews, who died in different ways or didn’t die at all in the timeline he nullified. What happened to all that paradox?