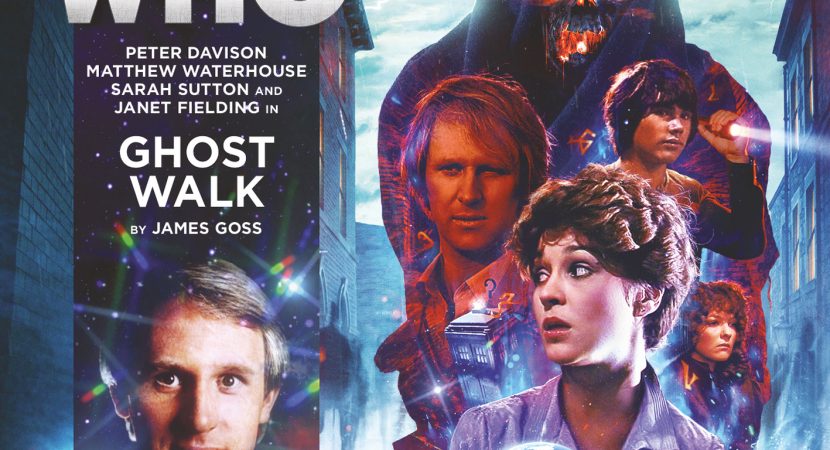 Wow. Every now and then, Big Finish comes up with a deliciously wild idea. The Chimes at Midnight, Eternal Summer, Doctor Who and the Pirates — this is one of those.

It starts out conventionally enough. Creepy catacombs, ominous signs of the occult, something spooky lurking just out of sight. As Tegan acidly observes, they seem to have landed in a sort of real-life Hammer film. Which is bearable as long as you’ve got a few friends around, but of course they wind up separated, and his companions are soon beyond the Doctor’s reach. He’s confronted with a pileup of his worst nightmares: the loss of his friends, his ship, and quite possibly his favourite planet, unless he can enlist outside help.

Doctor: “This is how the world ends, Leanne. On a rainy day.”

Leanne, a local tour guide taking visitors to haunted hotspots around the city, doesn’t believe in the supernatural, and she’s not about to listen to this lunatic. End of the world? Not bally likely.

Isolated from their friends, the four travelers must each endure a harrowing ordeal alone. Adric’s adventure is somewhat abbreviated— it’s hard to juggle a crowded TARDIS— but, brash as ever, he exhibits a selfless heroism that does the Doctor proud. Nyssa acquires a love interest, giving Sarah Sutton a chance to act outside Nyssa’s usual geeky Florence Nightingale range. Tegan offers the voice of common sense, cutting snark, and a surprisingly touching scene with the Doctor. As for the Doctor, he faces his own dark night of the soul with quiet dignity, frankness, and dry humour— very different from the angst and over-the-top emoting of his later incarnations. It’s one of Peter Davison’s finer performances since Spare Parts.

Somewhat like Under the Lake, this story challenges the assumption that classic Who regulars can’t die. If you’ve ever heard of Mary Whitehouse, this story would set her frothing. Two of the cliffhangers would be unsuitable for children to see, and they’re left to dangle rather than being neatly resolved soon after the break.

Suspense, foreboding, a creepy adversary, and familiar characters pushed past their limits would make Ghost Walk a real page-turner if it were a book. The clever premise doesn’t become obvious until near the end, so it’s worth at least one re-listen. Especially because the timey-wimey climax is a tad confusing.

Not only are the regulars rising to an unusual challenge, but the cast includes Sacha Dhawan portraying an appealing foil for Nyssa, and the incomparable Stephen Greif of Blake’s 7 fame (Is it just me, or is he starting to sound like Ian Collier?)

This ghost story ventures into some very dark places, yet there’s quite a lot of banter and wry humour, as one might expect from the author of How to Win Planets and Influence People. Also, the Crowded TARDIS with Adric is beginning to find its Big Finish chemistry. Not that the previous stories haven’t been entertaining, but it’s hard to pick up where one left off after a 30-year gap, especially since the other three have been working together for years during the interim, developing a comfortable working synergy that’s continued to evolve.

It’s a minor point, but I’m always pleased when stories acknowledge the unique aspects of each TARDIS team— in this case, the fact that three of the four travelers aren’t human. So Tegan’s reactions to strange and alien dangers invite a sympathetic audience POV, while Adric, Nyssa and the Doctor provide outsider perspectives on human strengths and shortcomings. The contrast between Adric and Nyssa was quite revealing. Nyssa’s fond of Tegan, but her inner snobbishness makes her more judgmental and less forgiving of humans than Adric. Perhaps understandably so, since she was waterboarded, whereas he didn’t have long to suffer before he was saved.

Now I can say what I couldn’t above: I adore the premise of a ghost story in which the Doctor and his companions turn out to be the ghosts! Mind you, I wondered why the Doctor and Tegan spent so much time saying they were going to come up with a clever plan and then not doing so. But I see now the whole point was to have all four of them “die,” so each of them had to struggle but ultimately fail. Of course, the Doctor finds a way out in the end.

It’s fascinating and heart-wrenching to see how each of them faces death and the loss of hope. Nyssa stoically demands to get it over with, while Adric blithely assumes he’ll wiggle out of it until the last second (see: Earthshock). Tegan is angry and terrified, but doesn’t let her fear of the Big Nasty keep her from fighting back. But she’s also a realist. She won’t let the Doctor coddle her with false platitudes; when she thinks her number is up she accepts it and makes him promise to save himself. The Doctor’s veiled grief and quiet anger after her “death” feels very raw, even though he tries to keep a lid on it. It’s so very Fifth Doctor that he spends his last hours tidying up his own grave and walling himself in so as not to inconvenience others, keeping up polite conversation with his tormenter. Of course, he’s also desperately seeking a way to follow Tegan’s wishes and break free. I’m so glad he does manage to rescue his friends and Earth in a whirlwind of cleverness— too often Fallible Five sees others sacrifice themselves in his stead, or he only wins through a pyrrhic victory, leaving him guilt-ridden and depressed.

Side note: I questioned Nyssa’s so-called “love story” on Twitter, but I couldn’t say what I meant without spoilers. I apologise for being pedantic, but I gotta say this for the sake of an old acquaintance who can’t.

Desire and love are not the same. A man who claims he loves a woman, but doesn’t care or even bother to ask what she wants, doesn’t really love her. He just wants her. And as charming as Matthew seems to be— kudos to Sacha Dhawan for making him so likable— his selfish decision to condemn Nyssa to death after she turns him down echoes the dangerous reprisals that many women face in the real world for saying no.

That, to me, is a horror story, not a love story. Even if he did repent.

On a lighter note, the Fifth Doctor calling himself “email spam” is adorable. I’ll ever forgive him lapsing into new Who “The Doctor Boasts About Being the Doctor” mode, because the punchline is so cute: “I’m the Doctor— I’m the link you shouldn’t click on.”