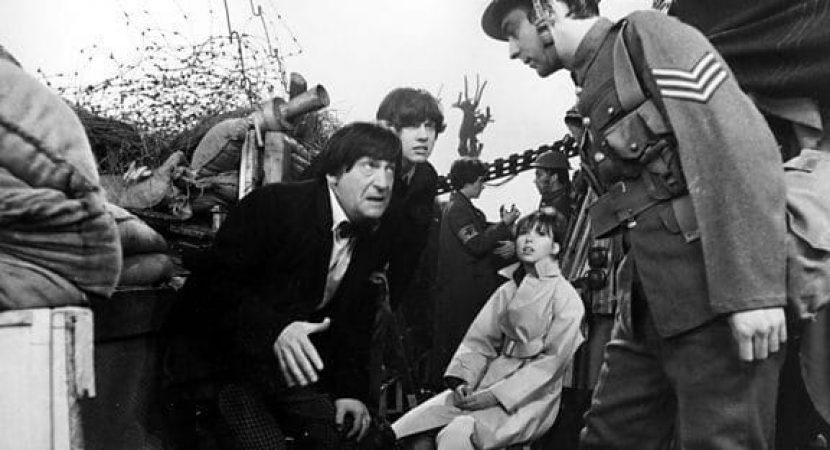 Thanks to #Whoagainstguns’ very worthy fundraiser for organisations dedicated to reducing gun violence, I’ve just watched The War Games for the first time in about three decades. I’ll try not to cadge on any of the fantastic episode commentaries they’ve produced as an incentive/reward for contributors to the fundraiser, but I want to get my thoughts down while they’re still fresh.

SPOILERS to all of The War Games, including the pivotal final episode which has Big Reveals. (Not that we don’t know them from later Who, since that’s the episode that established Who’s core canon).

(1) Time Lords Aren’t (or weren’t always) Evil; They’re on the Side of Good, Which Is Scarier

I see a lot of people talking about the evil of the Time Lords, colored by backstory that’s developed in the EU and new series. But for me, watching this back in the day (with The Three Doctors, The Deadly Assassin, Invasion of Time and The Five Doctors behind me), the Time Lords were more like implacable parents, benevolent dictators. They were the ultimate embodiment of Lawful Good, incompatible with the Doctor’s Chaotic good.

I’m reminding the Organians in Star Trek, abruptly interrupting a clash between Klingons and the Federation by taking away their toys (weapons). It was a common 60s SF trope: highly advanced alien species are essentially like gods: aloof, impassive, paternal, supremely confident in their superiority. When noninterventionist beings like this do interfere, they tend to unleash a metaphorical Thunderbolt of Zeus. Remember, Zeus was the Greek god of justice who could burn mere mortals to a crisp for their transgressions. He wasn’t evil, just domineering.

In many ways, the universe was safer before the Time Lords decided to break their long custom of noninterference. The Second Doctor berated them for getting involved, but look what happened when they finally went on the offensive. Ostensibly they were trying to save the universe from the evil of the Daleks, but “by any means necessary” as a Time Lord policy spells doom for large chunks of the universe.

The Second Doctor feared them not because they were evil, but because their idea of right and wrong was so absolute, demanding conformity, robbing him of autonomy. And he feared the tremendous power they wielded to enforce their will.

(2) Wars in living memory, vs wars that have receded into the mists of history

I was stunned to realize that the historical eras dramatized in The War Games are so much more removed from modern audiences than when it was broadcast, or even when I saw it. Audiences watching The War Games now must think of WWI as hazily as the 1969 audience thought of the Crimean War, 105 years before.

Whereas when I saw The War Games in the early 80s, WWI was still within living memory. My great-grandmother (99 years old) had lived through it; my maternal grandfather had been orphaned during it. All of my grandparents had served at home or abroad in WWII. So both these wars were still part of collective consciousness, with the one rapidly being eclipsed by the other. My school made us watch All Quiet on the Western Front. We kids were annoyed at our teachers for pushing this grim old-fashioned war at us— WWII was the “good” war; this was the “bad” one— but it still resonated with us as a direct forerunner of contemporary events. In Britain, of course, WWI was even more important. It was the Great War.

In fact, WWI was a miserable war that killed millions, doubtless including some older relations of the writers and production crews of 1960s Doctor Who. WWI losses had left such a deep scar on the British psyche that the prime minister had popular support when he tried to “appease” Hitler to avoid another world war. Meanwhile, Americans were back to being staunchly isolationist. Once WWII broke out, most people conveniently forgot how reluctant they had been to fight.

The people working on Doctor Who for its first 10 to 15 years would’ve fought in or been children during WWII, endured the Blitz, or at least been drafted by selective service. In their day, the dominant narrative of war was that the Allies had heroically banded together to defeat Hitler and save Europe. (Just as the various warring factions in The War Games have to unite). And yet that heroic paradigm of war was starting to tarnish once more. Britain was not directly involved in Vietnam, but peace protests in U.S. were raising questions internationally. Nor was it the only messy Cold War conflict of the 60s.

So I think it’s no coincidence that the most visible conflict in The War Games is not World War Two but World War One, which like Vietnam dragged on with rank-and-file soldiers dying for little or no gain. Sadly, the situation in The War Games is similar: these soldiers don’t realize the war they’re fighting is truly pointless, and they’re slaughtering one another at the bidding of alien leaders who care nothing about them.