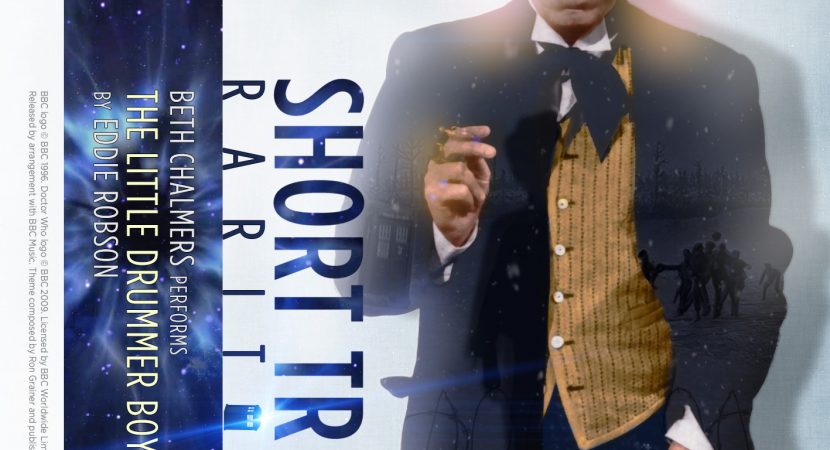 This is a singular Christmas story spinning off from The Feast of Steven, of all things. However, it’s a great deal more serious than its antecedent. My eyes watered a bit at the ending.

There’s a hasty intro to bring listeners up to date, since chances are you won’t have seen The Chase (what’s left of it) let alone part 7 of that serial, which only exists now as a soundtrack and stills (here’s the ending colorised by a fan):

The Feast of Steven was essentially the first Doctor Who Christmas special, a throwaway episode in a season-long serial chronicling the Doctor on the run from the Daleks, trying to keep a powerful whatsit, teranium, out of their grasp. The Little Drummer Boy begins immediately after The Feast of Steven ends, and the teranium plays a minor part in this story.

The Little Drummer Boy takes Sara, Steven, and the Doctor to several other Christmases, more or less significant. There’s even room to squeeze in a historical minisode, letting the TARDIS crew witness a famous event that took place on Christmas Day. The question is, why do they keep finding other Christmases? The answer is quite original and touching, with a touch of timey-wimey thrown in.

Sara’s compassion and the Doctor’s wits (and vice versa) are needed to get to the bottom of the mystery and find someone who turns out to need their help very badly. Steven has less to do, plotwise, but there’s some characteristic interactions between him and Sara and the Doctor. Beth Chalmers (aka Raine Creevy) does a fine job of capturing Steven and Sara’s mannerisms and personalities, and Hartnell shines through the later parts of the story as well.

I’ve often griped about new Who fans trying to interpret classic Who retroactively through the lens of the reboot, so I probably shouldn’t apply the rules of 1980s Who to 1965. Otherwise the Doctor’s clever plan would probably not end well. But I’ll forgive a poorly-plastered plot hole for the sake of good story. I think the final scene of this tale is a standout moment in Doctor Who, one that would work equally well for a modern Christmas special.

This is one of those old Subscriber Short Trips, originally a 40-minute bonus audio (released in December, obviously) that was a perk for a Main Range subscription back in 2010. Now it’s available for purchase as one of the Doctor Who: Short Trips Rareties. Seems like another good audio to listen to while wrapping packages.

It’s not the first time the Doctor has used the excuse that someone else screwed up the timeline, so he’s allowed to meddle with history to change it back. However, this timeline diverged at a much later point than the night where he chooses to tamper. Barbara would say See? I told you so. (And Adric would probably want to know why Five didn’t do it for him!) But that’s wibbly-wobbly timey-wimey; Doctor Who is never entirely consistent about how much the Doctor is allowed to rewrite events.

The real problem is the Blinovitch Effect, an energy discharge or explosion resulting from the same person from two different points in their own timeline bumping into themselves. It caused a major explosion in Mawdryn Undead (Brigadier + Brigadier), and it has devastating consequences when Nyssa crosses her own timeline in Prisoners of Fate. Here? So Robert meeting Robert should cause at least a Brigadier-scale explosion. Oh well. We should perhaps cultivate a healthy suspension of disbelief when it comes to retroactively applying later canon to early Who even before the Time Lords had been established.

Anyway, it’s a really sweet way to save a broken boy and his family, and that scene on Mars was heartbreaking. Well done, Doctor.