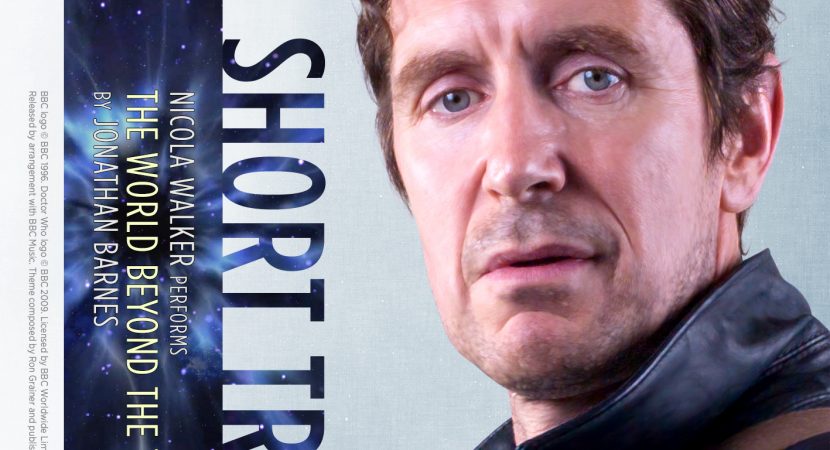 Aha! Last August, the Short Trip Damascus hinted at another story behind that story, and here it is: a delightful modern fairy tale, recounted by the Eighth Doctor’s companion Liv Chenka.

Liv Chenka is anything but a princess. This is my first encounter with Liv and her rational, frank, direct approach to the unknown. I can see why the Doctor likes her as a companion, although his presence in this story is more sensed than seen. Her friend Molly is incommunicado as well, leaving Liv to puzzle out a mystery in London by herself.

I love the way Liv reports on the 20th century as an archaic and primitive “epoch.” She regards its technology and culture from a detached, outsider’s perspective, commenting on commonplaces as we might if tossed back to medieval England. But this particular day in the 70s has an otherworldly feel to it, captured in stark yet beautiful language and Liv’s matter-of-fact narration.

There was even a badger, glimpsed for an instant in the undergrowth.  It was as if mankind had receded into the background, and that all the other species, all the other miracles who inhabit this planet had come out to play.

Like a fairy tale hero, Liv receives the Call, steps out onto her quest, and meets… well, that would be a spoiler. I try not to give too much away, especially on these short audios which don’t have much time for twists. But I will say this: Liv inadvertently fills the Doctor’s role in this story, right down to her friendly greeting and “take my hand.”

Like its twin story Damascus, a lot of this audio is more atmospheric than plot-driven. It makes me think of a Neil Gaiman Lite edition of Doctor Who, a little like In the Forest of the Night but with more subtlety. I loved Liv’s compelling narration and the charismatic, soft-spoken person she encounters. There’s a lot of good character beats and glimpses into what makes Liv tick. There’s a lot of love in this story, exploring familial bonds and bereavement. And the opening dream is evocative and eerie.

It’s a soothing, melancholy gem of a tale, just the sort of thing I was looking for as escapism from a grim week in the real world (I’m American, and I’m terrified). I’m tempted to rate it a 9, but I won’t only because it’s too short to go into more depth than it does.

You can listen to it as a standalone, and I’d forgotten enough of Damascus that I did so on the first listen. But I’ve now given both of them a re-listen. They work fine on their own, but they enrich one another by each tying off a few minor loose ends in the other story.

I’m delighted  at this reworking of Sleeping Beauty with such a pragmatic, unromantic woman in the place of Prince Charming. This time, the princess isn’t sleeping and isn’t passive; she’s chosen to put “the castle” to sleep herself on purpose instead of inadvertently. There’s a pastiche of other fairy tale motifs as well: three omens at the beginning, the magical whatsit inherited by an offspring who has to guard it from evil forces that would steal it, and even a kiss at the end.

On a more real-world note, the theme of love between dads and daughters is realistic and moving.

Finally, I can’t help noticing that in Damascus, you’ve got two self-important gentlemen waggling their egos and censuring one another for perceived slights in a game of strutting oneupmanship, while in this story, two women recognise each other as trustworthy and work together with empathy from the instant they meet.