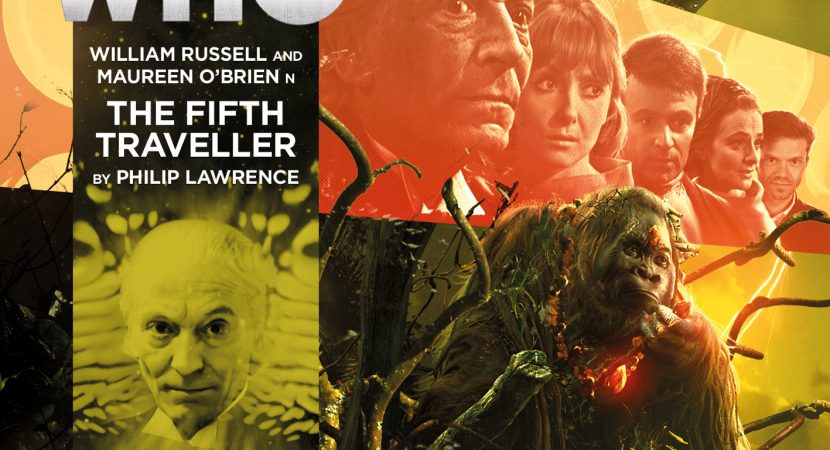 Like The Daleks and The Web Planet, The Fifth Traveller immerses the TARDIS crew in a vivid, truly alien world where they must struggle to survive. Audio cues allow the imagination to fill in what classic Who would struggle to portray: a dark, reeking jungle filled with dangerous flora and fauna.

The audio alternates between the TARDIS friends facing deadly dangers on the forest floor, and the complex Arunde culture of sentient apes living in the trees above their heads. Like Purity Bay in The Whispering Forest, the Arunde are facing a succession crisis with a young, earnest leader struggling to contain mutiny in the ranks. She is not helped by the arrival of the Doctor and friends.

Jospa, the “fifth traveller,” slots in effortlessly with the three regular companions, a credit to guest actor James Joyce. He’s only a little younger than Vicki, providing her with a good foil she can speak to as an equal for a change.

We gradually learn Jospa’s backstory in hints and asides as he and his friends explore and dodge dangers. But why is he with them, when we know that in canon there’s only four? It’s a clever way to introduce a guest companion, although I guessed the answer to that question at the outset.

The crew of regulars now includes Jemma Powell, who played Jacqueline Hill (Barbara’s actress) in Adventure in Space in Time. She’s stepped fully into Jackie’s sensible shoes as Barbara. She can’t replace Jackie, of course, but she does a reasonable job of bringing to life the character’s maternal yet no-nonsense schoolteacher persona, as well as her refined early 1960s RP.

Barbara: I never expected our ticket home would be so hideous.
Vicki: Awwww. Don’t listen to her, Squishy!

It’s my first time hearing Maureen O’Brien reprise Vicki, one of my favourite classic companions back in the day. Like most of the classic actors, she’s got her work cut out for her pitching her voice up to conjure a more youthful character. Now and then the effort of getting the voice right results in Maureen or Jemma sounding slightly stilted. But it was never enough to jar me out of the story. On the other hand, Maureen does a superb job narrating the audio in her own voice. She’s evocative yet unobtrusive, so that it still feels like an “as live” dramatisation as opposed to an audiobook.

Dear old William Russell is still pulling off a credible First Doctor as well as Chesterton, although at this point he sometimes sounds older as Ian than he does the Doctor. He’s just great.

It’s a good story. I found it a little slow in spots, but then the First Doctor era ran at a more measured pace than modern drama. I loved the darkness and texture of the Arunde’s world. And the “fifth traveller” plotline is a clever twist that hasn’t quite been done before.*

I enjoyed Domain of the Voord more, but I think any fans of the First Doctor era will want this one. Imagine what The Web Planet or Keys of Marinus would’ve been like with special effects limited only by the imagination.

*since Jospa isn’t taking orders from anybody but himself, certainly not from a chap with a dead bird hat. Also, he’s a more competent and less reluctant villain than Turlough.

My main trouble with the story is that the name, The Fifth Traveller, rather gave away the fact that Jospa was likely to be a plant. My suspicions were confirmed as soon as the regulars started harping on “good old Jospa!” in the opening sequence. There wasn’t much way to erase doubts altogether, since we know “good old Jospa” isn’t with this TARDIS crew on TV, but Big Finish has done enough original companions that they might have fooled me, if he hadn’t been so transparently too good to be true.

Then again, my humanities major training makes me sensitive to subtext and Chekov’s guns. I knew who’d killed Shama’s mother as soon as Gark started giving her a hard time about being Matriar. I was at least stymied by the Vervitic soldier; I thought that was Jospa with mental camouflage lifted.