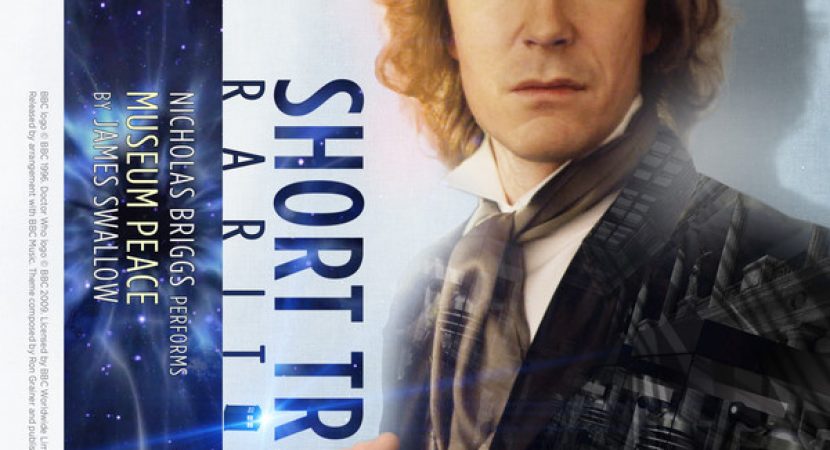 Museum Peace is a moving coda to the Dalek Empire series, a quiet yet momentous encounter between the Doctor and a veteran of the Dalek Wars. It’s a 40-minute audio narrated by Nicholas Briggs, originally a Subscriber Short Trip only available as a bonus with a 2009 subscription, released for purchase in 2016 with the Big Finish Rareties collection.

This audio doesn’t spoil too much if you haven’t heard Dalek Empire 1 & 2, save that it tells you something about Kalendorf’s fate in that series. A friend of mine listened to it who hadn’t heard DE yet, and she was so moved she decided to start that series on the spot.

Museum Peace riffs on the fact that Kalendorf and the Doctor are both veterans of Dalek Wars, even if the Doctor doesn’t like to think of himself that way.

Kalendorf has met the Doctor once before (in Return of the Daleks, a Dec 2006 bonus release I haven’t heard yet). He’s had plenty of time to ponder what he’ll say if he ever meets the elusive time traveller again. Of course, the Doctor probably won’t give him the answers he seeks. In fact, it turns out that the Doctor needs answers from Kalendorf instead.

There’s moments of danger and eye-watering pathos in this short story, but it’s mostly a psychological character study revisiting the central moral dilemma of Doctor Who. It segues seamlessly into new Who’s take on the Daleks, in a way that stands up even after Day of the Doctor rewrote the history of the Daleks once again.

I can’t believe this script wasn’t penned by Nicholas Briggs. It captures the themes and atmosphere of Dalek Empire perfectly. Nick’s dramatic reading gives it the necessary gravitas, and he’s tossed in a few subtle sound cues from the DE series to take us back. His imitations of Gareth Thomas’ gruff tones and Paul McGann’s lighter ones are spot-on, not parody but simply a good translation of the characters. But you don’t need to have heard any of that series to appreciate this minisode.

It’s a good story. It makes me want to revisit Dalek Empire and get to the audios I haven’t heard yet. For $2.25, it’s definitely worth a listen.

Apparently Eight wasn’t quite ready to make the decision even after this, but Night of the Doctor and Day of the Doctor both echo Museum Peace. I suspect Moffat may have listened to it. In both of those stories, the plight of innocents caught in the crossfire is what finally drives the Doctor from his state of pacifism and noninterference.

I love the idea of Eight going to Kalendorf for advice on his “momentous decision,” and I love the unsentimental and spartan way this story addresses “Do I have the right?” Having the spotlight on Kal rather than the Doctor provides a refreshingly different perspective on that eternal problem in Doctor Who.

Also? Kalendorf is such a great character. RIP Gareth Thomas, who passed away earlier this year along with far too many wonderful people.