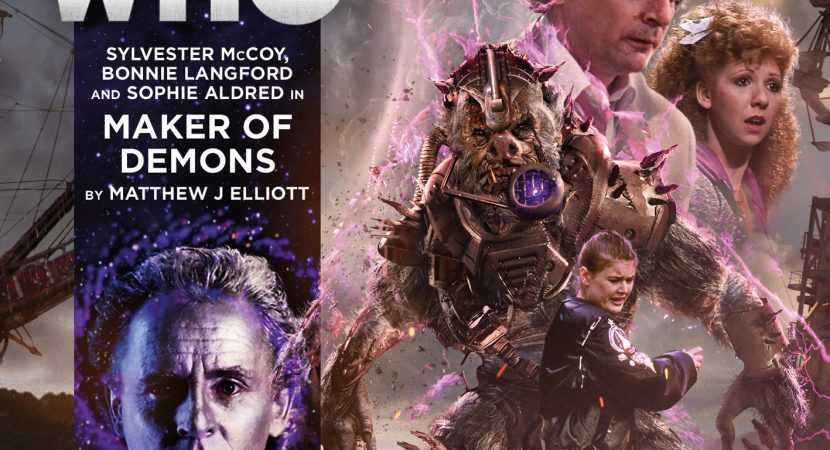 Mel and the Doctor show off a past success to Ace, only to find the aftermath is a Shakespearean tragedy. Or comedy? There’s a little of both in this story, and quite a lot of Shakespeare.

A hundred years after Seven and Mel left a human colony celebrating a newly-minted peace treaty with the native population, they return to a world wracked by tempests and monsters. The victims blame the Doctor for their woes.

The Doctor and his friends must piece together what went wrong and try to make amends without making things worse. Mel’s computer wizardry and brains assist aboard the grounded colony ship, while Ace faces a harsher trial out on the surface, trying to stay alive and win over one of the monsters.

“Here now, Doctor. Do something brilliant with this!” — Ace

For whatever reason, I had a hard time getting through this audio. My real life intruded, but also the story’s pacing is slightly meandering until everything comes together in the fourth, strongest episode.

Still, there’s some good ideas and worldbuilding. I enjoyed the Shakespearean conceit, tossing in random space Elizabethanisms. Better done in Unbound’s A Storm of Angels  (but then again it’s difficult to top that imaginative masterpiece), where the writer dared to go much farther, and I’m disappointed the technomages (to borrow a term from Babylon 5) weren’t used more extensively in the story.

It’s also a good thing to confront the Seventh Doctor with the consequences of his machinations. Fallible Five knows that sometimes he leaves things for the worst, and rues his failures, but most of the other classic Doctors style themselves heroes who sweep in, save the day, and dash off without staying to help with the more difficult task of creating the happily ever after.

In the extras, Sophie Aldred obliquely mentions one of the script’s weaknesses, which she strives to overcome fairly wel.l. Ace spends almost the entire story in a battle of wits with a grunting giant, fending him off with an almost nonstop stream of snark. Which can get irritating. I like Ace and Sophie, so it worked for me.

I’m still mystified where this falls in Ace’s timeline. Supposedly she and the Doctor pick up Mel again after the whole Hex arc, but she seems closer to TV Ace, less the scarred veteran of the Seventh Doctor’s ruthless chess games. It seems like a soft reset for both of them.

Again, it may be due to the choppy and piecemeal way I listened to this audio, but I feel like it was a story in need of a bit more story. It’s entertaining, it’s just one of those classic Who adventures that doesn’t jump out of the bunch. Big Finish has spoiled me to expect superlatives.

I was wistful that, once again, Big Finish has a rare opportunity to explore friendship and cooperation between two female companions, something that’s almost never happened since the First Doctor era outside of Castrovalva, and once again, they squandered it. They always seem to split the team to match one female companion with the Doctor instead of pairing up the women  and seeing how their different personalities and strengths play off of one another.

Castrovalva shows what I’m talking about: remember Tegan and Nyssa working together while the Doctor and Adric are out of commission? Yet they almost never do so in the audios, and, tragically, they barely touched on the BFF bond between older!Nyssa and Tegan,  preferring to team up Nyssa and Turlough almost exclusively. While it’s fun having Mel and Ace taking turns hanging with the Doctor, I hope Big Finish won’t waste the chance to discover what Team Mel and Ace are capable of while he’s off scheming.