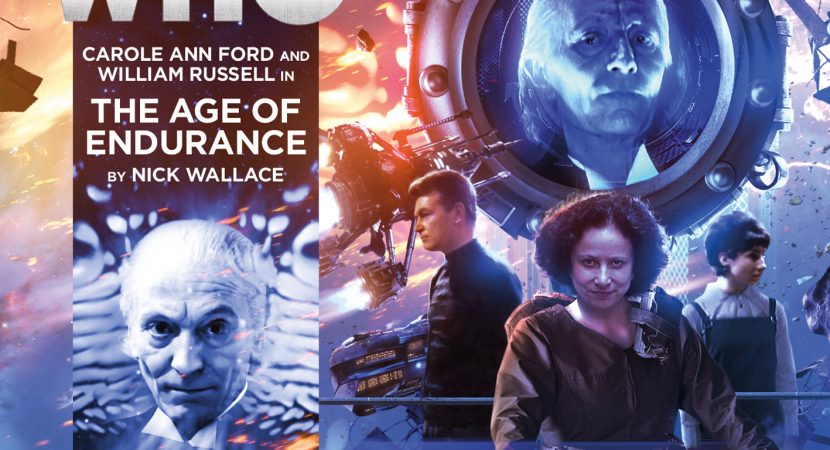 This is a classic space adventure that I listened to several times just for fun. It feels authentically First Doctor era, if only they’d had the budget.

We’ve been here before: spooky derelict spaceship, a body, and the possibility that our TARDIS team will be blamed for murder when a scouting party arrives to look for the missing crew. Thankfully, predictable plot goes by the wayside in favour of something more interesting and exciting. Once again the four travelers are split up, forced to pick sides in someone else’s war and offer assistance in the interest of staying alive.

The real strength of this drama is an epic space battle drawing on several classic films you’ll probably recognise. Ship to ship combat isn’t easy to pull off in audio, but the script and sound effects make manoeuvres easy to visualise. There’s a lot of vivid action sequences taking advantage of the dramatic space setting and the battered vessel where most of the TARDIS crew wind up. However, there’s more to the story than action sequences. There’s plenty of time for character beats. In the end, the conflict hinges on ethics as much as tactics.

Susan has some great character moments, showing off her compassion, ingenuity and pluck while hiding or trying to thwart spooky enemies. Ian is his usual lovable blend of impulsive nerd and brave action hero, making his guardian angel work overtime in one spectacular feat of derring-do. The Doctor is appropriately irascible and brilliant when he’s not down for the count. William Russell voices both. He and Carole Ann Ford take turns providing minimal narrative tissue as needed, but most of the drama is staged via “as if live” acting.

Jemma Powell, who played Jacqueline Hill with aplomp in Adventure in Space in Time, has a very modest trial run as Barbara, just as Elliot Chapman was given a reduced role in his first outing as Ben Jackson. She’s convincingly gracious, but sidelined for much of the story (as is the Doctor; he takes a Hartnell vacation for an episode or so). I presume she’ll will be given more to do now that fans have indicated they’re willing to accept new actors filling in for beloved but deceased actors.

The guest characters are a skeleton crew of humans and aliens. Kudos especially to Rachel Atkins as the hardnosed commander of the rebels, Myla. Her crew are a likable lot of extras, although necessarily somewhat backgrounded to allow the TARDIS regulars to shine.

It’s a relatively straightforward story, but it’s well-told, nicely paced, and has some wonderful imagery begging for CGI. You might nitpick some of the science (why are Susan and Ian resistant to radiation, when they’re not using radiation gloves… drugs?) But I had fun listening to it.

Everyone thinking of The Wrath of Khan, raise your hands. Yes, I know, it borrowed from Das Boot and The Hunt For Red October. It’s a good trope, and it’s past time for Doctor Who to play with it. Once again, Big Finish beat the TV show to the punch, proving that you can do just about anything with audio.

I mentioned how much I loved the imagery in this story. In particular, Ian rappelling down the outside of the hull and Susan climbing in and out of giant pistons that could start moving at any moment gave me the wee willies! (Although I did puzzle over pistons in a spaceship, since propellors don’t work in a vacuum,  but I suppose turbines could be generating some kind of power or magnetism or who-knows-what.)

Also, I liked the questions raised about family ties. We’ve moved beyond traditional notions of motherhood, seeking new definitions, new ethical rules. What does it mean to be family once genetics are under human control? What obligations do parents have to “children,” and vice versa? Does anything change once lives are artificially prolonged or supported by cybernetics? Good questions making this story more than the sum of its space battles.