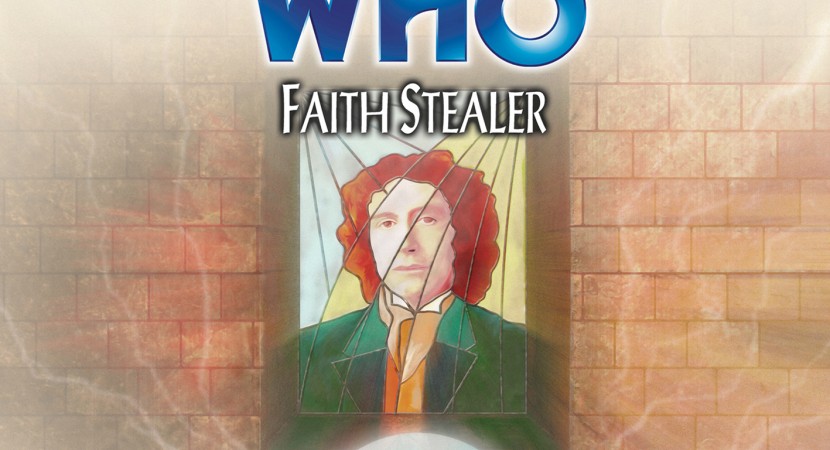 In this case, the issue at hand is how multiple religions can happily coexist. The Doctor, Charley and C’rizz stumble across the Multihaven, an artificial city built like a jobs fair to house the temples and missionaries of many different faiths. They’re all busy converting one another like traders on a stock exchange floor, which is both entertaining and unlikely. But many of them are earnest and genuinely well-intentioned. Can one of them help C’rizz, who’s suffering a crisis of conscience from the mercy killing he committed several stories back?

Maybe. If the local One True Way (Ours!) sect doesn’t get in the way.

Like the classic Trek episodes I alluded to, or perhaps a Douglas Adams or Terry Pratchett parable, the Multihaven setup is a little too artificial and exaggerated to be a good analogue for real-world religions. It’s parody, not realism. It made me realise a minor quibble I’ve had with all of the Divergent Universe scripts: the societies feel like scenarios, simulations, lab experiments with deliberately-chosen parameters. As such, their inhabitants don’t seem quite as real. Therefore, it’s harder for me to care about them.

“It’s just another experiment, Charley. Take pure strains of several religions, place in a neutral solution, and observe.” — The Doctor

That said, there is some clever meta-commentary about religions, faiths, cults and superstitions.

Since C’rizz is facing a crisis of faith in this adventure, I was hoping it might delve into his backstory a little further. It doesn’t. Instead it keeps replaying a relevant clip from Creed of the Kromon, an audio so bad that I’d really rather blot it out rather than be reminded of it.

There’s some fun, typical Doctor Who guest characters and extras, but none really jumped out at me. I did like Bordinan, the Multihaven’s sensible director with a live-and-let-live attitude towards different religions. The Doctor and Charley are back to their likable space tourist selves, but don’t have any particularly standout scenes. C’rizz gets a few good moments with Charley but is otherwise extremely passive in this story. The Doctor has a few chances to flash his powers of deduction and persuasion as well as his irrepressible wit.

In the end, it’s a fairly run-of-the-mill classic Who story. Entertaining enough, but not a standout.

Note: I may be jaded about this audio because I’m listening to Big Finish in release order, and it’s contemporary with  Dalek Empire season 3. DE3 isn’t quite as good as seasons 1 and 2, but still some of Big Finish’s finest.

This is the third audio I’ve listened to recently in which hints early on seemed to be leading towards something, but fizzled out.

For example: we’re reminded that C’rizz is a monk of the Foundation religion, whatever that is, and Charley and the Doctor discuss the fact that they haven’t asked about it and really don’t know much about him… but then they still don’t ask. I expected that to play a role somewhere during the finale. I thought C’rizz’s own faith might prove to help him, but instead he lapses back into passivity while the Doctor handles everything.

I also expected that the Miraculite entity would turn out to be an alien that had glommed onto the broken TARDIS and was abusing the telepathic circuits somehow. That cabinet with endless corridors inside certainly sounded like the TARDIS being used for evil ends, which would’ve been a sweetly sinister (although not original) twist.

Oh, that’s another thing. Charley and the Doctor keep searching for the TARDIS, even though their journey into the Divergent Universe began with their pronouncing the TARDIS dead, dead, dead in Scherzo. They abandoned her dead husk in order to survive. They seem to have mostly forgotten that fact.

Finally: was it mere coincidence that the miraculite’s static noise sounded suspiciously like the Never people in Neverland?