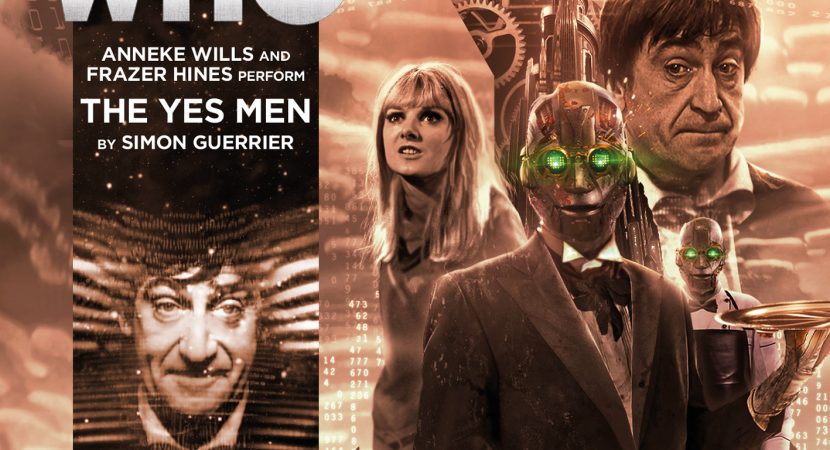 I’m jumping out of order to tackle an Early Adventure or two. This one turned out to be a treat. It’s a retro 1966 SF story about a futuristic Earth colony, except that it tempers 60s sensibilities with the more complex storytelling we expect of Big Finish.

A chance exchange on Twitter with Elliot Chapman, the new Ben, reminded me of the lovely things Anneke Wills said about him at the con I attended this March. She wasn’t exaggerating! As a Big Finish fan, he knew what was needed, and he watched/listened to every single Michael Craze episode of classic Who and wrote great commentary on all of them (part II) to prep for the part. The result is delightful: a convincing Ben, full of life and attitude, who fits in comfortably with the old crew. Between that and Frazer Hines’ uncanny ability to channel Patrick Troughton, Big Finish can now work its magic in bringing another past season of classic Who back to life.

In this audio, the Doctor revisits New Houston, an Earth colony he saved from invasion when he was traveling with Dodo. To his dismay, he finds he’s brought Ben and Polly back decades later, just in time to witness the state funeral of an old friend. There’s something fishy about her death, and that’s not all. Deserted streets, creepy robot servitors, oppressive rules and regulations, and political machinations cast an ominous pall over what should be a thriving and prosperous colony. What’s going on? The Doctor and Polly try to investigate Meg’s death at the central library without being arrested as suspects themselves, while Jamie and Ben take an involuntary excursion into Uncanny Valley. It’s a moody story, but there’s time for lots of Two-era humour as well:

Every episode ends with a clever twist, sending the story careering off in a different direction. At first, I was afraid that the plot was too black and white, but I should have trusted Big Finish. The tone and style matches 1960s Who, and it borrows heavily from 60s ideas about the future, but it reexamines classic tropes in more nuanced ways. The regulars sound like their old selves, but they have more to do and say, with more glimpses of personality and backstory.

Ben disappears for a fair amount of the story, because writer Simon Guerrier didn’t know he’d have the luxury of a “real” Ben to perform his lines. Luckily, there’s some good Ben and Polly scenes at the beginning and end. The robot storyline results in a hilarious yet terrifying crowning moment of awesome for Jamie. Polly is clever and outspoken, telling off the Doctor when she thinks he’s compromising his ethics. Even the Doctor has a few revealing character moments, juggling conflicting demands of ethics, friendship, and the needs of the colony.

Unlike Main Range, the Early Adventures occasionally resort to a narrator to supply setting and stage directions. With Frazer doing the honours as Patrick, Anneke is designated narrator— which I don’t find intrusive at all, since she’s easy on the ears. Having Polly narrate adds to the retro flavour. If you listen closely, she’s describing what amounts to smart phones, tablet computers and outdoor LCD displays with the same level of detached unfamiliarity that she does flying cars and domestic robots.

On the strength of this audio, I’ve pre-ordered the Second Doctor Companion Chronicles, which has another story with Elliot joining Anneke and (maybe?) Frazer. But Companion Chronicles are usually two-handers, so I hope big Finish is planning more full-cast dramas down the road for this crew. It’s really lovely how well they work together.

Note: Not only did Elliot Chapman rewatch every Ben & Polly TV story for his role; so did author Simon Gurrier, posting his notes here. His insights are well worth a read.

I was surprised and pleased at the opening scene with the Doctor teaching Ben and Polly some basic TARDIS operations. It intrigues me how many of the classic companions know at least some basics of how to fly the TARDIS: Mel in The Last Adventure (I think?), Nyssa flying solo in 1001 Nights, probably Susan and definitely Romana, and then Tegan, Turlough and Adric each prove that a little knowledge is a dangerous thing.

There’s a lot of misdirection in The Yes Men, from the murder whodunnit, to the robots’ intentions to “dispose of” or “dissect” Ben and Jamie. After Jamie solved his Kobayashi Maru scenario by slaughtering the English in their sleep, I was afraid the audio’s climax would be a bloodbath, with the Doctor forced to destroy the robots before they massacred all the citizens. But in fact, Ben’s sense of fair play helped mitigate Jamie’s more bloodthirsty instincts: Ben was dreaming of saving people from the Daleks, so the New Houston robots understood that they mustn’t act like Daleks.

I’m glad Big Finish has been referencing Dodo lately. She was forgotten for so long. It adds an interesting layer to this story, that it happens not too long after the Doctor’s first regeneration, and he’s still showing a hint of regeneration fuzzy-headedness at the beginning. (Later on, he tugs at his frock-coat lapels to greet Meg, but I think that was deliberate.)

Finally: the scenes between Meg and the Doctor were a fascinating reflection on accountability, and on what happens to people who might have become companions (Dodd, anyone? Or Duggan?) but who stayed behind.