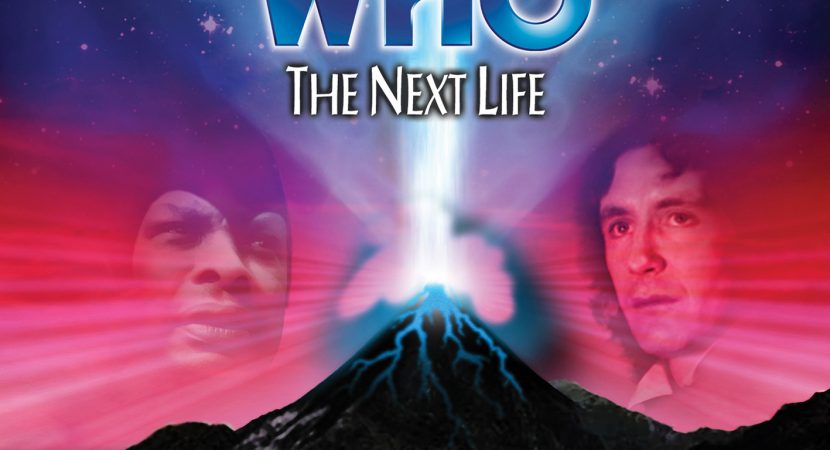 Nothing in this life became them like the leaving it, to misquote Will Shakespeare.

The Next Life is a monster six-parter, the culmination of the Divergent Universe arc that Charley and the Eighth Doctor have been stumbling through ever since Scherzo. This story is a bookend to that one and Zagreus. An unusually good cast of guest characters makes sense out of a drama that wavers between action adventure and allegory. (With characters named “Perfection,” “Guidance” and “Keep,” it’s unwise to take it entirely literally).

The first part of the story spotlights Charley and C’rizz, each enduring a private ordeal of memories. It’s an unexpected joy when Anneke Wills’ voice breaks in on Charley (especially since I don’t glance at cast lists in advance), once again playing Charley’s mum with panache and warmth. C’rizz, meanwhile, has to come to grips with his religion as well as his guilt. It was well past time to learn about his Church of the Foundation, and this audio delivers. It took me several scenes to recognise the silken growl of Paul Darrow (I haven’t seen Blake’s 7 in 20 years, okay?) as Guidance, C’rizz mentor, but he’s one of the reasons I enjoyed this story despite quibbling with the pacing.

The middle part covers the Eighth Doctor’s adventures with Grace, ahem, Perfection. (No, she isn’t Grace, but Paul McGann and Daphne Ashbrook fall back into their old byplay as if the Eighth Doctor TV series had never been cancelled.) They have to survive hostile natives and a dangerous jungle that turns out to hold the secret to the universe.

The final part consists of great galloping buckets of exposition and a showdown with multiple charismatic villains trying to gain control of time and/or the Doctor and his friends. The antagonists are impressive, but I think I’ll save more specific comments for after the spoiler-break.

This story suffers from trying to achieve too much. It creaks at the joints, the exposition feels like Stone Soup (too many ingredients thrown together), the jungle segment is full of so many clichés and archetypes that I was expecting it to turn out to be a virtual reality simulation,  and the script might’ve been better pruned down to a four-parter. But it does tie off a great many threads from the Divergent Universe so that they all fit together: the Divergence, their lab experiments, the “Crucible World,” and, yes, an excuse for why the Doctor can return to his original universe.

Despite messy plotting, the character interactions are a joy. I love the opening scene with Charley, C’rizz and the Doctor settling back into TARDIS life. Everyone sounds like themselves (for the most part— I’m no more keen about the jealousy theme in this story than I was in Zagreus, but that’s personal preference). The guest characters are unusually good, thanks to the high calibre of actors; in most audios, Paul Darrow or Daphne Ashbrook or Anneke Wills would be a special treat all by themselves, but all three together in one story? And Don Worthington? Who cares if the pacing could use an edit. And there are some great story moments as well, particularly the ongoing tension between loyalty vs. betrayal. All of which served to raise the level of this story to an epic level like Neverland and Zagreus, or at least to Scherzo’s level, which it needed to be.

It works. I enjoyed it, despite having to listen to the exposition dump multiple times to understand all of it. It’s good closure for the Divergent Universe arc. I wouldn’t suggest listening to it unless you’ve heard some of those stories.

One has to understand the context of The Next Life. The new Doctor Who series was imminent, and new fans coming over from TV might’ve been confused and dissatisfied if they’d met the Eighth Doctor in the middle of the Divergent Universe arc with no TARDIS, a strained relationship with Charley, and these odd Crucible Worlds whose populations were difficult to care about, because so many of them felt like caricatures or archetypes in virtual reality simulations. I laud Big Finish for taking risks and shaking things up, and heaven knows Doctor Who has tried other experiments just as drastic (Three stranded on Earth and working for UNIT), but I’m relieved that new Who gave BF the impetus it needed to shut down this arc prematurely. It sounded to me like Paul McGann was pleased as well: Eight sounded so happy to be going back to his home universe and starting afresh, and I don’t think that required any acting.

Speaking of the Crucible World: even after that wide-ranging exposition dump I still don’t entirely understand how it worked. Each of the societies the Doctor and Charley visited seemed to be a worldwide civilisation that should have noticed if they were confined to just part of a planet. Some of them even had space travel. Why weren’t they aware of the other societies? How could they not have noticed the walls of their petri dishes?

I loved C’rizz’s betrayal, althoughI was confused about why he seemed to fall completely under Guidance’s control in one scene and be free of him in the next. He’s as shifty as Turlough. Which, from the standpoint that it adds more depth to the character, is a good thing.

I wasn’t quite sure why Charley and C’rizz started sniping at each other well before C’rizz turned out to have betrayed them, although I suppose Rassilon sowed the seeds of discord in their minds. But they’ve been getting along very well for the last several adventures, haven’t they? Still, it gave the Doctor to moderate and lay to rest all the simmering tensions that had made their team feel like less than a team sometimes.

It’s years too late to quibble now, but I’m still saddened at Big Finish (and later New Who) turning Rassilon into a villain. That said, I love Don Warrington’s portrayal of him. (Also I like the fact that he’s black. It’s audio, but the cover art, at least, reinforces that fact: Time Lords don’t have to regenerate as white dudes, a precedent set here years before TV Who did it).

Also? The ending made me laugh. I’ve been listening to Dalek Empire lately, where the Daleks are utterly terrifying, but having the Doctor come home to Daleks yapping at them like dogs wagging their tails was almost endearing. Aww, they missed him! So did Davros. And I couldn’t help chuckling about the fact the Doctor and pals are returning to a universe largely populated by monsters who sound like Nicholas Briggs. There could be no more obvious sign that they’ve found their way back to Home, sweet home.