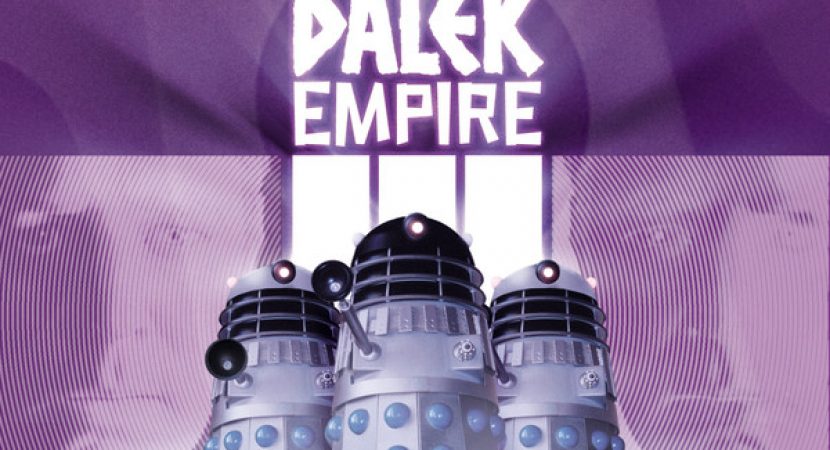 The disparate threads of Dalek Empire 3 are starting to come together, and the Daleks’ plan is what you probably guessed it might be. I kept hoping, but the last two installments showed that Daleks are still Daleks, for all the curious nuances of the Dalek Supreme this time around, and they’ve just hatched a new, diabolical plan for galactic domination.

The execution of that plan is, quite literally, nightmare fuel. Kaymee, left behind with the NFS plague, experiences the nightmare firsthand. A chilling sequence of scenes between her and Carneill, who realises too late he’s made a deal with the devil that she’s paying for,maps out an understated descent into horror that leaves Kaymee in a terrible places indeed. The audio then shifts to the brave Graxis Wardens, who are beginning to take the battle to the Daleks, giving us explosions and action sequences. But as always with Dalek Empire, the human drama of trust, betrayal, and hard choices is the core of what makes these audios compelling. Poor Siy Tarkov now knows Galanar and Elaria were lying to him and manipulating him, and he’s now the galaxy’s last hope when he’s lost all hope and faith in anyone.

“AUGH! You’re making me trust you! I can feel it!”

The Siy Tarkov scenes, especially, are powerful, emotional drama, although there are times when his agonised rants are as difficult to listen to as when the plague was robbing him of his voice. Great acting on all sides. Once again, David Tennant adds that little extra to the story as Galanar, who’s immensely likable on the one hand, but on the other has a special power to make people like him.

I also continue to appreciate Ishia Bennison as Commander Saxton, a tough-as-boots older woman  leading her renegade Wardens on a desperate bid to keep from being exterminated while hampering the Daleks’ plans.

I wonder how Nick Briggs can possibly wrap this arc up in one final episode. Maybe it’ll be a cliffhanger.

Good characters. Good story. I’m not as floored by DE3 as I was by the first two seasons of Dalek Empire, but I’m still enjoying the ride. In fact, as I go through my Listen-o-thon in Big Finish release order, I find I’m more eager to listen to the next Dalek Empire installment just now than the next Main Range, even though I’m here for my love of Doctor Who.

The Daleks’ plan this time is much as I thought it might be: introduce a plague (not that I have any proof it was theirs), then offer a “cure” that conquers invisibly. Poor Kaymee.

I note that we now have two fundamentally good people who have been Dalek-i-fied: Kaymee and Susan Mendes, currently speaking as the Dalek Supreme. Can they help one another remember who they really are? And what will happen if/when they come in telepathic contact with Kalendorf’s ghost on Velyshaa?

For that matter, what about Snuffy? There’s a small chance she survived the holocaust of Graxis. Kaymee may yet have an ally.