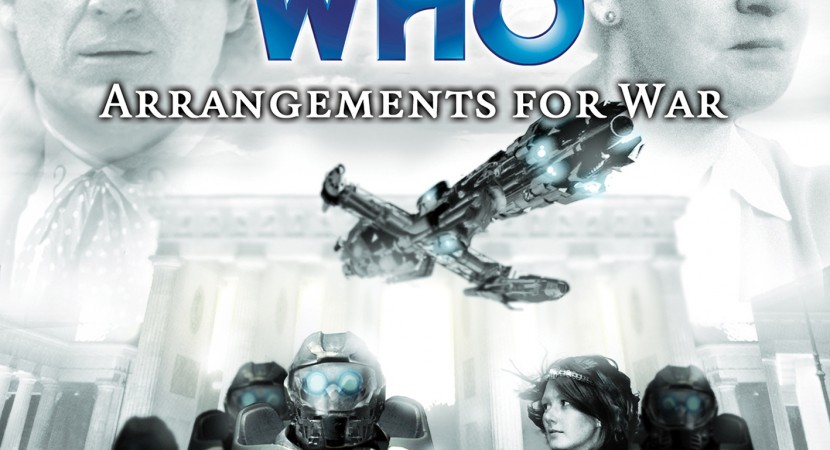 This is one of those stories that only Big Finish could do, a month-long drama with such heart  that it put tears in my eyes. It also demonstrates why Dr. Evelyn Smythe is one of the Doctor’s finest companions.

It builds on the past. I suggest listening to The Marian Conspiracy, Project Twilight and Project Lazarus first, and probably Doctor Who and the Pirates. I’m not sure it would have quite the same impact if you hadn’t followed the ups and downs of Evelyn and the Doctor’s friendship to this moment of low ebb.

Arrangements for War picks up (and spoils) where Project Lazarus ends. Evelyn needs some time to herself to think and to reassess her relationship with the Doctor. She wants to go somewhere where she can learn and explore as a traveler without having to intervene. So the Doctor takes her Világ, a civilised planet dominated by three superpowers who seem at last to be putting differences aside. Two formerly warring powers are forging an alliance which will benefit all. They don’t need the Doctor’s help.

Except, of course, it all goes pear-shaped. The Doctor is incapable of remaining uninvolved, even when he tries to be so. Likewise for Dr. Smythe, even when she’s off having her own adventures without him.

Never handcuff a woman with small wrists. Especially one whose night cream is still in her handbag. — Dr. Evelyn Smythe

Telling a story over the course of a month (with news reports to fill the gaps) opens up the stage in ways that 1-to-3-day stories cannot. There’s time for both Evelyn and the Doctor to establish meaningful friendships among the locals. Evelyn finds a kindred spirit in Governor Rossiter who respects and admires her historian’s aptitudes, while the Doctor takes two young people under his wing and into his hearts like a kindly uncle.

Maggie is magnificent, but I also have to send a virtual hug to Colin. I wish every fan my age who was traumatised by the Twin Dilemma’s strangulation scene could hear these stories, hear what a good Doctor Sixie is, and hear Colin’s great performances.

Apart from one minor villain who’s no more than a one-dimensional plot device to cause trouble, all the secondary characters are compelling, and they need to be.

[Tip: Give this audio a virtual facelift with good fan-made custom cover art.]

Arrangements for War strikes a delicate balance between small, meaningful character moments and the narrative sweep of political and military events in which they’re enmeshed. Both the Doctor and Evelyn have important roles to play on the world stage. Instead of thwarting monsters with split-second actions, galloping about, and hacking or using technology to problem-solve, they assist with their diplomatic skills, intelligence and experience.

My one knock on this audio is that it starts slow. It builds very gradually towards a memorable climax in part IV.  Also, it took me some time to untangle all the secondary characters’ allegiances and countries of origin. I expect it will be even better on a relisten, now that I’ve got them sorted. There are also some sentimental moments, but for me, at least, the acting was nuanced enough that I cared instead of cringing.

It feels more like a six or seven-parter than modern Who, a book rather than a TV show.  The final scene between Evelyn and the Doctor gets at the core of who the Doctor is, what kind of people can be his companions, and how they do or don’t work together.

It’s just a pity there was already another Doctor Who with the title Love and War.

(Warning: Do not visit the TARDIS Wikia page for this audio; there’s a whopper spoiler at the bottom of that page to a future Evelyn audio that I wish I hadn’t seen!)

I can’t add much to the above comments, except that I was impressed when the Doctor finally lost it and decided to violate the Web of Time for a girl who was in some ways a surrogate Susan for this incarnation. Also, how amazing it is that Evelyn is the one to bring him to his senses and force him to let her go, when just one audio ago she was begging to go back and save another young person. She’s brilliant.

And she still hasn’t told him.

It’s also a painfully clever trope that for once, the conflict that the Doctor and Evelyn would normally step in to resolve had been settled amicably just before they arrive, and it’s the Doctor’s unwitting blunder that causes everything to unravel. He feels directly responsible for the deaths of his precious Juliet and Romeo, but more than that, news reports suggest hundreds of thousands of people died in the war triggered by their carelessness. Possibly that war was unavoidable; Suskind was trying to make it so. But if the Doctor takes responsibility for Markus’ death and not only Krisztina’s (which happened because someone was shooting at him), then he also had to shoulder the blame for the chaos their choices caused.

Not that I really want to load more guilt onto his shoulders.