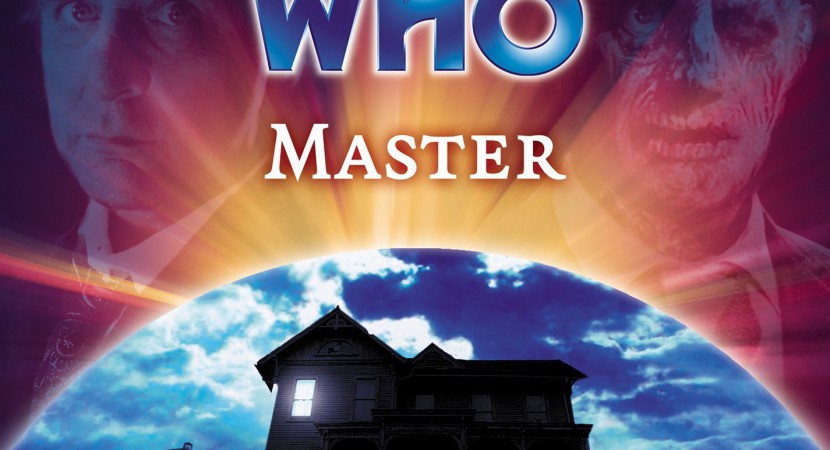 Whew. Sometimes Doctor Who dares to break its own rules and tell a great story. Sometimes it betrays what went before.

A twelve-regeneration limit? Unthinkable! Then, too, fans protested loudly our first in-depth glimpse of Gallifrey. The Doctor half-human? We’ll just pretend we never heard that. He destroyed all of Gallifrey in a Time War? How can that be the Doctor? But perhaps he didn’t, after all. Outrage: fans were just as vocal about the Day of the Doctor retcon as they had been about the Time War in the first place. The first time the Doctor kissed a companion— scandal! We won’t be holding with all this canoodling. And so on. Who canon is never entirely canon, but it’s still controversial when the show introduces a seismic shift.

This audio offers one such shift. I’m not sure I approve. Yet Master is outstanding, intelligent drama, and I greatly enjoyed listening to it again.

It’s innovative right from the trailer, which offers a prologue instead of excerpts from the audio itself:

Dr. John Smith throws a birthday party with his closest friends to celebrate the ten years that he’s lived in Perfugium (Latin for place of refuge). The arrival of an uninvited guest with death on his heels is the catalyst for a psychological drama, more like a stage play with a small cast than a typical classic Who serial, that veers between ghost story, thriller, and murder mystery. The tension is ramped up by the fact that we recognise John’s voice, adding irony and anticipation to many of his lines: he’s the Master, isn’t he? What’s he up to? When will bodies start hitting the floor? Or is he the Master? And if he’s not responsible for all the unsettling goings-on, who is? The Doctor? By this time, Big Finish has expanded on the Seventh Doctor’s role as chessmaster, so we cannot be sure which of them is the villain of the piece.

“Except you don’t do that anymore, do you, Doctor? Don’t play your spoons, don’t mix your metaphors, don’t have fun. Too busy destroying planets, tidying up your previous mistakes.”

Th drama pivots on well-worn archetypes and tropes: Jekyll & Hyde, nature vs. nurture, stock figures in murder mysteries, prophecies, white lies, black lies, and stories of childhood. At times it teeters towards pantomime and melodrama. Yet it works, both because it employs those stock elements so well, and because it subverts them.

More importantly, the actors give compelling, masterful performances. Sylvester McCoy raises his game in Geoffrey Beevers’ presence, and Beevers is, arguably, one of the best actors ever to play the Master, absolutely at home in the audio medium, using his voice to be affably charming and reasonable-sounding and refined, yet adding a layer of menace or tortured doubt or deception as needed. His performance is subtle, versatile, and emotionally affecting, which is what this story needs.

He’s aided by solid guest characters: Anne Ridler is absolutely convincing as Jacqueline, an upper-class woman brimming with high-minded sentiments and class consciousness, and her husband Victor the inspector, an opinionated yet likable blowhard with black and white opinions about the lower and criminal classes. Victor is played by Philip Madoc, whom I remember vividly as Solon in The Brain of Morbius, and less clearly as the War Lord in The War Games. He’s exactly what the character needed.

This audio, the last of a triptych with Big Finish’s “classic” Doctors 5-6-7 before the 50th release of Zagreus, explores the character of the Master and his relationship with the Doctor, looking ahead and looking back. By the end of it, we’ve been given a few more tidbits about their childhood that help explain who they are today. There’s a bit too much heavy-handed allegory near the end, and I could’ve done without the deus ex machina (in classical tragedies, that expression referred to an actual god being lowered by a crane), nonetheless, it’s fascinating and moving story.

I need to reserve most of my comments for the spoiler-section below the break.

I’m wrestling over the childhood backstory this audio introduces to the Doctor and the Master. On the one hand, it’s an poignant vision of the two boys growing up on Gallifrey, and it gives the Doctor a painful past chapter: saving the life of his friend, yet dooming his friend to bear his guilt for the murder. On the other hand, this story is in keeping with late 20th and 21st century cynicism which thinks that “good” heroes are boring. No, they’re not. They’re just harder to write well than “gritty” heroes with more glaring flaws. I watched Star Trek and the Sixth Doctor and Superman and Frodo and so many other fundamentally decent, if flawed heroes undergo “gritty reboot syndrome” which started by tarnishing them irrevocably, as if it’s impossible for us to leave any heroic character untainted and impossible us for to write compelling drama with them as they are, and I say: bull hockey. The Doctor is flawed, but he doesn’t need a bloody-handed murder in his past (or guilt for the destruction of all of Gallifrey) to make him interesting.

So even when it’s done well— and it’s done very well indeed in Master— I wince. I brace for the inevitable ghoulish glee with which fandom is going to embrace the character’s newly-invented flaws and deconstruct/dismiss/belittle past canonical examples of their goodness and heroism. It happens. The murder in the backstory of Master is now taken as gospel by a certain segment of online fandom to explain everything about the character, even though the character was consistent and hung together (and screwed up) without that inserted element.

In other words, Master is an extraordinarily good drama, but controversial worldbuilding.

I notice that it uses multiple layers of distancing, narrative frames inside of narrative frames, as if to raise doubts about whether it’s a story or the truth. The Doctor is telling the story to an assassin, who turns out to be a fiction himself. The Doctor tells John a story about their past. Death tells a different story about the same past. John is a real person, or the Master is real and John is a fabrication.  The whole story is a retelling of Jekyll and Hyde. Whose story-inside-a-story is the truth? Or all they all allegorical?

The storytelling aspect of Master raises doubts about whether anything Death says is true. Would the Doctor really make a deal with Death? (Especially since he never, and can never, go through with it: I think the implication may be that Zagreus is Death’s punishment for his constant dealbreaking, although nowadays it’s hard not to think of the Time War).

It’s the character of Death with which I have the biggest problem. Again, a compellingly acted character, and it works well within the context of the play. But within the larger universe of Doctor Who, it’s dicey to posit a Tanith Lee/Neil Gaiman style anthropomorphic incarnation running around. More importantly, it detracts from the character of the Master to make him Death’s servant (or even Death’s champion). I appreciate Beevers’ rebuttal, when he assumes his old mantle of the Master, declaring that he’s not Death’s servant, because he seeks power, not death.

Reducing the Master to the victim of a Faustian compact with Death reminds me of new Who’s attempt to give the Master a sympathetic past by inventing the sound of drums to explain his madness. That’s overdetermination. It’s a common feature in classical Greek drama and epic, “double motivation,” having the intervention of gods double up with the character’s own psychology:

This is the kind of instance we mean, where there’s a sort of double motivation going on. The actions are perfectly understandable, purely on the human level, but by adding a divine motivation as well, by saying the gods are in some sense controlling the human perceptions and actions, Homer adds to our sense of inevitability for how the story is going at this particular point. — Vanersow, “The Role of the Gods”

“Sense of inevitability: i.e. the “fate” the Doctor’s talking about, which negates free will and the need for coherent motive. In the end, Death gives the illusion of choice, so the Master can “choose his destiny”: save the woman he loves and become the Master, or condemn her and his friend the Doctor. For the character of John Smith: there’s no question which option he’ll choose; paradoxically, as a good man, he has to choose to resume his evil ways. The Doctor calls out “Master!” not “John!” as he’s snatched away, because he knows the outcome is predetermined.

Personally, I much prefer the earlier discussion about the Master’s motivations: not that he lacks motives, but that his worldview is so warped that he sees a different red than we do. I don’t want Death’s bargain or auditory hallucinations justifying his actions.

I’ve ignored the other characters, but they’re psychologically fascinating as well, even if they’re not central to the story. Philip Madoc is perfect in the way he can suddenly break through his fussy civilised Edwardian veneer into a madman. And Jacqueline is a very human character, too, overcoming her stereotype (privileged charity-worker motivated by guilt yet secretly snobbish). She is the voice of reason and calm, insisting the others resist the fear and madness trying to overwhelm them. No wonder her death is really the point over which the Master, Victor, and even the Doctor (indirectly) unravel during the climax.

Finally, I want to reiterated what I said in my review of the previous audio in this set, Davros: “There’s a fascinating theme going on here: every one of them seems to pivot in one way or another on a moment in the Doctor’s past when he had a crisis of conscience which he’s still trying to make up for.” In a way, that will hold true for Zagreus as well.