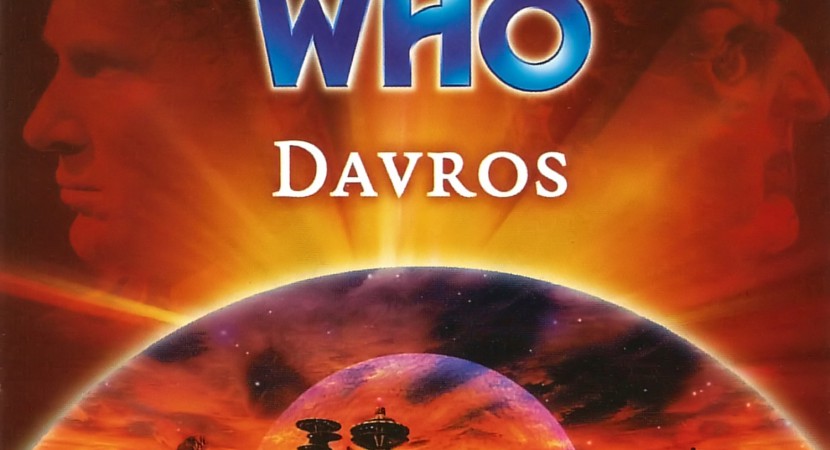 This is what Big Finish does best: flesh out classic Who characters with psychological, emotional depth. Now it’s Davros’ turn, masterfully played (so to speak) by Terry Molloy. The sixth Doctor is at his bold, brash, overweening yet well-intentioned best.

Answering the call of an old acquaintance, the Doctor has left Peri at a botany conference to investigate a megacorporation whose downsizing plans may leave whole planets destitute. It’s not really the Doctor’s usual do-gooder fare, but he soon discovers a juicier problem: TransAllied, Inc has hired Davros as a scientific advisor?!

Have a trailer. (And listen for Wendy Padbury.)

It’s a daft idea, and it might’ve fallen flat with lesser actors, but Molloy and Baker have great chemistry, and the CEO and his wife — performed by Bernard Horsfall and none other than Wendy Padbury in her first Who role since Zoe donned bubblewrap for The Five Doctors— are a believably nuanced power couple, shrewd enough to keep up with the Doctor and Davros (almost). All four of them are superb together, making this a really solid character drama. The Doctor’s old acquaintance, Willis, is a bit of a drip, and I’m not entirely taken with the hapless technician and pawn Kimberly Todd, but they’re really beside the point.

The point is to discover whether Davros can really outgrow the cardboard cutout villain mold of Evil Genius. Flashbacks provide backstory, glimpses of childhood, a hint of a love story that succeeds in subverting the standard tropes just enough to remain interesting, and a few really excellent monologues. It’s a good thing Colin Baker can muster bombast to match. In fact, part of the fun of this story is that a lot of the accusations of monomania and troublemaking he levels at Davros could apply equally well— or even better— to the Doctor himself, making Davros sound like the reasonable one.

“Baynes was clear. We are to work together!”
“Well, we are working together! I’m pleasantly surprised just how well you’re fitting in as my assistant.”

The story stumbles a little towards the end trying to find closure.  I’m not sure it was a good idea to craft it in two 75-minute episodes instead of cutting it down to two hours. Like Omega, it drags a bit in places. Nevertheless, it’s a strong audio, and there’s a lot of interesting ideas in it. It feels very EU, or even modern, expanding not only on Davros’ backstory while also exploring the domination of the galaxy by megacorps introduced in several classic Who stories (The Sun Makers, Terminus, Androzani et alia).

Trivia note: Colin Baker and Wendy Padbury became good friends when she was his agent. This audio doesn’t give them too many chances to show off that rapport, but listen for it. It’s even more obvious in the timeline-tangling audios when Zoe and Six cross paths.

I had one other minor quibble with this story: despite the Doctor’s ego, I can’t quite believe he’d work for Baynes. Or at least, I’m surprised he didn’t continue to sabotage Davros’ work.

Obviously, this story is part of the Omega—Davros—Master—Zagreus trilogy, pitting one Big Finish Doctor (Five, Six, Seven, Eight) against one great nemesis. There’s a fascinating theme going on here: every one of them seems to pivot in one way or another on a moment in the Doctor’s past when he had a crisis of conscience which he’s still trying to make up for.  It’s subtle, but the story is predicated on critical moments when the Doctor hesitated to kill Davros in the past. “Have I the right?” “I’m not here as your prisoner, Davros, but as your executioner.”

Again, Six hesitates. Although he does find something to shoot, in the end, Davros nearly defeats him, because the Doctor can’t bear to kill Todd while trying to take him out. The problem is taken out of the Doctor’s hands when she commits suicide. After all that agonising, the Doctor does, apparently, find the will to kill Davros from afar, crashing his ship. But the Doctor seems to disavow responsibility for murder almost immediately: “Oh, yes, he survived. People like him… and me… don’t know any different.”

I wonder if Steven Moffatt had listened to this audio before writing the Davros/Twelve confrontations in new Who. I almost think he did, as the Davros in that story thinks of the Doctor as a friend, in away. And the new show’s Doctor has become a survivor, the last of his race, in ways that Big Finish couldn’t have predicted at the time this audio was produced.