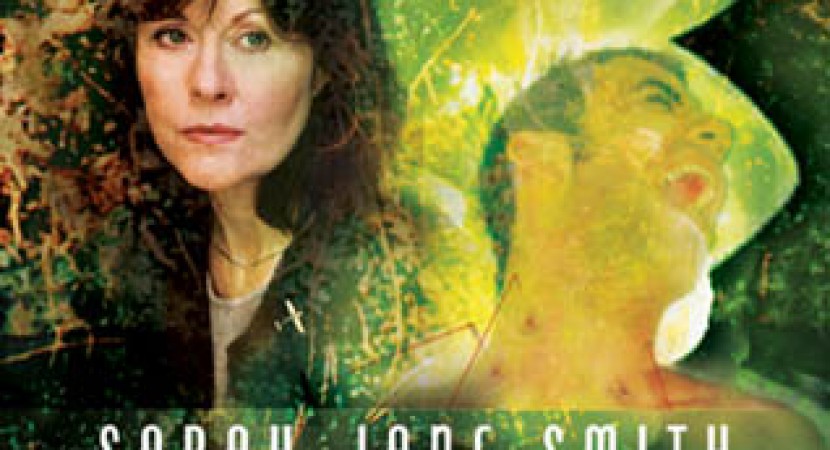 This audio is incredibly frustrating for me, because I enjoyed most of it, yet I’m sick of the homophobic “gay = predator of young men and boys” stereotype. The first openly gay man in a Doctor Who drama was bad enough, but The Tao Connection doubles down on the trope with a truly repulsive example. Actor Moray Treadwell pulls out all the stops with exaggerated lisping and every stereotypical mannerism he can cram into his performance. Come on, Big Finish, how could you go there twice in the span of eight months? I’m not saying that gay villains are off-limits, but homosexual desires should not be pivotal to their villainy.

“But besides that, Mrs. Lincoln, how did you enjoy the play?”

Here, have a trailer.

Basic plot: Sarah and Josh trace some fishy business back to a New Age health spa for rich gits. No prizes for originality there, but it’s a fun drama full of spying and disguises and grisly discoveries. While Sarah infiltrates the clinic as part of the hired help, Josh serves as backup, at least until he lands in a tight spot. That results in one of my favourite scenes in the series thus far.

“Yes, of course. Sarah Jane Smith, the bitch.” — one of the health clinic customers

The Tao Connection demonstrates once again that Sarah Jane can be a shrewd, steel-willed Emma Peel when she needs to be. She even flashes a little Venusian Aikido she learned from a friend— “It’s a bit showy, though.” I love the way the SJS audios weave in references to classic Who without making them explicit or letting the Doctor take the spotlight from Sarah. She’s the protagonist, with other young people as her assistants, and sometimes they become sidekicks in distress, requiring rescue. But will she? Or does the bigger picture sometimes take precedence over their safety? That’s a central theme of the SJS audios, and it adds an edge to them not found in other iterations of the character.

Sarah’s other helpers Ellie and Nat put in brief but solid appearances, and the guest characters are mostly excellent as well, including Sarah’s friend Claudia Coster who’s part of government intelligence. She’ll play a more pivotal role in the following audio. Incidentally, female characters outnumber the gents, albeit mostly in minor roles. No role is really minor when Maggie Stables cameos as a landlady with ghastly cooking!

In short, there’s enough good moments in this audio that I didn’t give up on the series, but it’s just as well that the following audio is a far better story. Otherwise I might have given up on the SJS range, despite my fondness for Lis Sladen and Jez Fielder.

Jez Fielder was absolutely brilliant playing poor Josh bare-arsed and drugged to the gills. Lis is equally good in that whole sequence, fretting and chivvying him along, conveying the danger they’re in while coming across as very motherly and compassionate. Forget swashbuckling heroes delivering damsels from castles; I like this flavour of heroism.

At the same time, Sarah once again shows her less kind, less gentle side in pursuit of vigilante justice. She doesn’t kill Butley directly, but by pouring out his “medicine,” she condemns him to death. I’m a little baffled why she did that, actually. Didn’t she tell Josh she wanted to recover the “draft” in order to help restore the hapless victims?