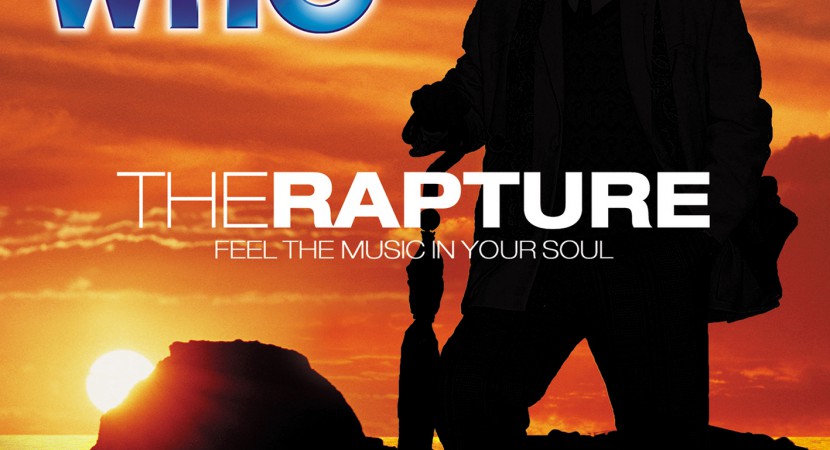 Whatever you may think of The Rapture, you’ve got to admit its cover art and trance remix of the Who theme are inspired.

This is an odd duck of an audio, with catchy club music from the end of the last century and a lot of lively, clever cutting between conversations that make it a lot of fun to listen to. For a while.

Poor Ace, ahem, “Dorothy McShane,” is burned out from recent adventures and a surfeit of grisly death. She needs a break from monster-hunting and a chance to reaffirm whether she wants to continue the nitro-9 lifestyle with a Doctor who’s become a lot more dangerous and Machiavellian than the kindly Professor she started out with. So the Doctor takes her to a resort island and sends her off clubbing while he catches up with an old friend.

Ace soon finds the party from hell (or heaven), falls in with two nice blokes and a girl her own age, and cuts loose to trance techno. It sounds like a Neil Gaiman plot: angel DJs are using the power of music to inspire the Rapture. But Ace has other things to worry about when yet another splinter of Tragic Backstory forces her to confront her own past.

The guest characters in this one are mostly thumbnail sketches, apart from Liam, who holds his own as a foil for Ace. Both of them spend an episode or so wallowing in temperamental teenaged angst. Anne Bird as Caitriona offers an exaggerated caricature of a drug-addled tween. Matthew Brenher as the angel Jude is once again fierce and stern yet sympathetic (I took a shine to his performance as Lord Zzarl in Red Dawn). His brother Gabriel’s near-hysteria counterbalances his determined demeanor. And then there’s Gustavo, the Doctor’s bartender friend, a veteran of the Spanish Civil War who feels nostalgic for a simpler time when young people had a cause worth fighting for.

The story essentially ends in Part 3 and then flails around looking for a plot to sustain it through part 4. Padding includes an absurdly long Sylvester speech while someone’s life literally dangles in the balance. No rush— they’ll wait! While I’ve always loved Seven’s ability to defuse the threat of violence with the raw charisma of a good speech, this time, his argument is so tepid that he has to pop in a CD of someone else talking to do the talking for him.

I exaggerate. In fact, there’s some intriguing ideas in this script: the angel DJs, Ace engaging in the youth culture she embodied on the original TV show, an audio dramatisation of a drug trip, sibling ties and their limits, mental illness and PTSD, and thoughtful commentary on how Gen Xers lack the crucible of war to temper them and give their lives meaning. Most of all, Ace has an emotional run-in with someone from her past, giving her a chance to decide whether she still wants to face danger across time and space or return to an ordinary life on Earth. So far, so good. The chief problem, besides the fact that there really isn’t enough story for four episodes, is that there’s entirely too much melodramatic bellowing (“AAaaace! Aaaaaaace!” “Get away from me!” “Don’t do it!”) When even drugged-out Catriona notices she’s in a soap opera, it’s time to change the channel. Also, the audio ends on a puzzling coda which presumably foreshadows some future story.

I was having fun listening to this loose and experimental audio until about two-thirds of the way through. At that point, much like Wile E. Coyote five seconds past the end of the cliff, I looked down.

I’m ambivalent about the clichéd Separated-After-Birth enhancements to Ace’s backstory. On first listen, it was such a cliché that my initial reaction was, “Really?” Liam eventually won me over with his earnestness, his emotions on his sleeve, and his enthusiastic “wicked!” reaction to Ace’s amazing life I liked him enough that I hope he shows up again.

This story does what classic Who seldom got around to: allowing characters to decompress and come to grips with life-shaking experiences at the end of the story. It’s not something one can show onscreen, because it would be anticlimactic, but it’s more realistic to acknowledge the characters need to recuperate rather than simply move on with a “Ho, hum, Adric’s dead; let’s go to the Great Exhibition!”

The offscreen downtime also allows the Doctor to wander off “tying up a few loose ends.” Presumably that includes some solo adventures.

Speaking of solo adventures: After Jude recounts how he took his mad brother somewhere to recuperate and hide from him the memory of his crime, the Doctor says, “I understand. I did the same thing with an old friend.” I’m guessing that refers to the backstory of the Master audio. In fact, I suspect “tying up a few loose ends” included the Doctor going back to check on the aforementioned old friend.