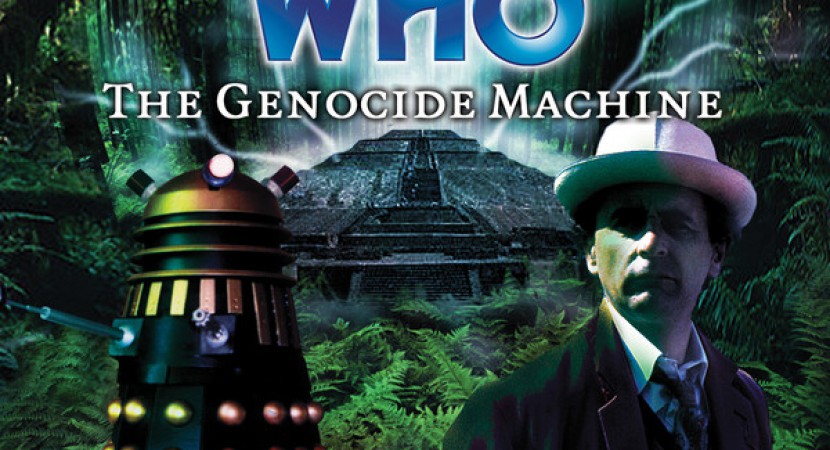 Nicholas Briggs must’ve been overjoyed to direct this one, the first official Dalek drama since Remembrance of the Daleks. It’s fun seeing how Big Finish picks up the dropped threads of classic Who and starts weaving them right out of the starting gate. Unfortunately, I was sick of Daleks before the fifth Doctor shoved a gun in Davros’ face, so it takes a good script to keep me interested despite their grating voices.

The Genocide Machine starts out innocuously enough with the Doctor taking Ace to a secret library to return some library books he’s had checked out for a few eons (oops). This particular libary puts the Library of Alexandria to shame: it contains every piece of literature, good or bad, in the entire universe. In a plug to support your local library, the Doctor points out that so much knowledge could be a formidable weapon in the wrong hands. Or plungers.

There’s better Dalek audios to come, and soon. This one almost overcomes my reticence, so I’m assuming Dalek fans will enjoy it. It’s got several excellent ideas like the jungle ghosts and the library, and the story title is more ambiguous than you’d think.

“Good afternoon, Daleks. How lovely to see you again.” — The Doctor

I appreciate Sylvester’s R-rolling monologue of outrage on the side of justice, something I loved during his TV run (think of his Battlefield speech on nuclear war). I frankly prefer this version of his Doctor to the chessmaster that Big Finish has developed since then. Sophie, meanwhile, is excellent as Ace, and she has a special part in this story that’s a lot of fun.

On the downside, this early Big Finish struggles to convey drama and action effectively, and characters didn’t always react with the strong emotions I’d expect. “Oh, I thought you were dead” or words to that effect should never be a casual aside. The guest characters are likeable but not particularly memorable, and there’s long stretches when they’re standing around being silent, to the point that I lost track of whether Bev was parked in one scene.

Also, it was supposed to be a gag with a payoff, but Elgin’s constant asides to a character who never spoke remind me of a stage production of Henry V pleading with us to imagine the army and all the extras who aren’t there. Nor is that the only case where speaking characters draw attention to named characters who have no lines. In other words, “Hi, we’re a radio play, and we can only afford a few actors!”

So, some good points, and some flaws. If you like pepperpots more than I do, you’ll probably rate it higher.

Fanwork note: Some creative fans have made mini-movies dramatizing excerpts from this audio.

This audio highlighted one of the aspects of the Daleks that annoys me most. They tend to explicate the plot in short declarative sentences that sound like a children’s book for Dalek tots. “The Daleks are invading. We have captured prisoners. Seek the Doctor. We intend to seize the library. The next plot point is X. We are doing Y. Z is now happening.” Show, not tell, please, especially not with those voices. Two cliffhangers were delivered via Dalek Narrator “Here is the Scary Thing That Is Happening Now” voice.

On the other hand, I really loved evil!Ace. Sophie was having fun with the voice.

Production Code 7S puts it immediately after The Fearmonger, and the behind-the-scenes notes for this audio insist, “This story takes place between the television adventure Survival and the 1996 TV Movie, and after the Big Finish audio adventure The Fearmonger.” So I have reluctantly followed Big Finish’s notes and made it the second Ace audio.

My beef with this chronology is that Ace seems more like an ordinary bored teenager and tourist, whereas in The Fearmonger Ace acts as the Doctor’s independent field agent, with special ops training. Their relationship is very different in that story compared to this one.  To me, this feels more like Season 26 than “Season 27” (i.e. the season that would’ve come after the show was cancelled). I’d originally labelled it as Season 26 in my Audio Index (see link up top).

But that tangled up the chronology of the audios that follow, so I’ve given in and, reluctantly, put it after The Fearmonger and before Dust Breeding.