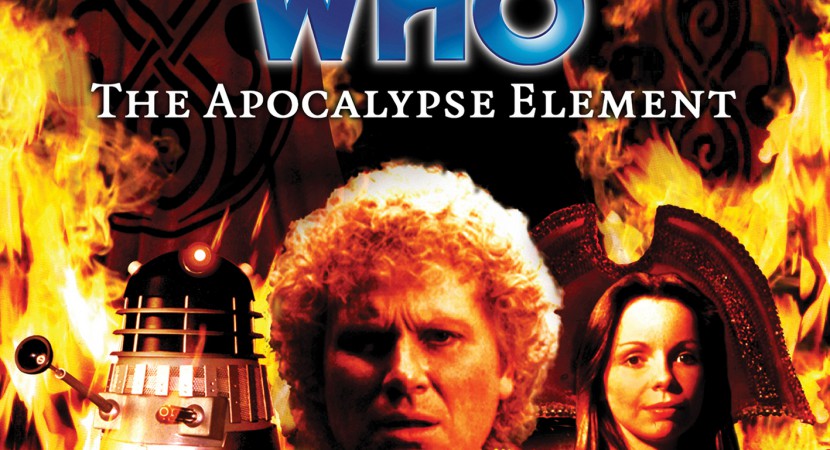 For the end of its first year of Doctor Who, Big Finish whipped off the kid gloves and served up an epic. The Apocalypse Element is ambitious, action-packed and complicated, folding two stories into one like an old-fashioned six-parter. It also heralds the return of Lalla Ward as Romana.

“I’m too old and, frankly, too important to be taking orders from you, Doctor.” — Romana

The Borusa-like Lord President and Narvin-like CIA Coordinator Vansell from Sirens of Time return in more substantial roles, attending a meeting of the Temporal Powers trying to hash out a peace treaty. They’re also hoping to discover the whereabouts of a vanished planetoid, Etra Prime, where President Romana herself disappeared twenty years ago.

“Since when did Gallifrey seek the approval of other time-travelling races?” — The Doctor

Evelyn is away from Earth for the first time, and she carries herself with charm and courage. Romana’s entrance is memorable, but I won’t spoil it; she is commanding and charismatic as only Lalla Ward can be. Colin Baker takes a good script and runs with it, almost too relaxed about the dangers at first, gradually becoming more passionate and desperate as the stakes keep climbing like a nuclear reactor approachin critical.

The Daleks burst in, and I refuse to spoil anything else after that. Suffice it to say that this is one of their most audacious and dangerous schemes ever. It’s not surprising that RTD later alluded to this story as the opening salvo of the Time War (see the Spoilers section below).

There’s a large and slightly confusing cast of secondary characters, thanks to the two stories in one. Luckily, the guest actors are good to excellent, and Commander Vorna eventually shuffles off so I can stop confusing her with Trinkett.

I’ve seen some complaints about The Apocalypse Element, but personally, I think it’s a great early, heady Big Finish. If it sometimes falls short with an overly convoluted plot, longwinded Shakespearean monologues, and noisy, chaotic battle sequences, I think it more than makes up for those defects. Better that Big Finish should challenge itself now and again than confine itself to poltergeists in girls’ boarding schools or the Daleks’ diabolical plot to acquire a library card.

Speaking of library cards, this story is officially Part 2 of Dalek Empire. Part 1 was the recent Seventh Doctor and Ace story, The Genocide Machine, which introduced the Daleks to Big Finish and hinted at Nicholas Briggs’ preoccupation with pepperpots. In each story, the Daleks use a Trojan Horse strategy to infiltrate a transduction barrier. They are part of a multi-pronged Dalek plot which would lay the foundation for a spin-off Big Finish miniseries, also confusingly named Dalek Empire.

On BF WebsiteMR#11 - The Apocalypse Element

There’s a lot of stuff going on in Apocalypse Element, and a lot more left unsaid. I think this story would’ve been a six or seven parter in classic Who.

It glosses over the question of how Romana (and K9, not mentioned) returned from e-space and became president, but we know she’s clever enough to find a way. The early part of this audio suggests that we’re going to have a damsel in distress plot, with the Doctor running to her rescue. In fact, she rescues herself, and repeatedly kicks back whenever the script threatens to shove her into her old subordinate role as the Doctor’s companion. Lalla and Colin work together so well you’d never guess this was their first joint story; nonetheless, this is Romana on her own terms and not as the Doctor’s sidekick.

It may have been a mistake to remind us of the Doctor Who Movie trainwreck, but I thought the business with the Doctor resetting Gallifreyan systems to need a human retinal scan was rather clever. Evidently nobody remembered to reset the password for the Eye of Harmony controls after the crisis was over. (As for why the Capitol is secured with retinal scans in this one story and never again, you’re listening to the wrong show if you want consistency).

When I first listened to The Apocalypse Element, I guessed that Russell T. Davies had gotten the idea for the Time War from this audio. It may not have been his original inspiration, but he certainly had it in mind:

“The story of the Great (and final) Time War is hard to piece together… While it is hard to find precise records of these events, it’s said that under the Act of Master Restitution, President Romana opened a peace treaty with the Daleks.* Others claim that the Etra Prime Incident began the escalation of events. But whatever the cause — and it’s almost certain that the full story has yet to be uncovered — the terrible War began…” — Russell T. Davies, Meet the Doctor, 2006 Doctor Who Annual

*It wasn’t Romana. If anything, it was the unnamed Lord President serving in her absence. Wibbly-wobbly canon aside, I’ll give RTD a pass for mentioning “President Romana” as official backstory for the new series.

I was a little dissatisfied by the ending, which tapers off  into moralising speeches and leaves behind a great flapping loose end to help set up a spin-off series. However, with the advantage of hindsight, I can see that this is not only laying the groundwork for Dalek Empire, but also Gallifrey, although I’m not sure the author realised it. If they’d been able to rope in Louise Jameson and John Leeson, it would’ve been a prequel. (Leela is there in spirit, however, since Trinkett follows in her footsteps, teaming up with a Chancellery Guard captain).

This audio establishes some important events in the Big Finish elaboration of the Doctor Who universe. It establishes Romana’s return, making it canon that she escaped e-space and became president of Gallifrey. Also, CIA Coordinator Vansell is back, established in Sirens of Time (as was Michael Wade’s unnamed President, now revealed to have been serving in Romana’s place.)